Indoor flags and presentation sets are often used for ceremonial purposes and at parades. If you are looking to purchase an indoor flag set, our Build Your Own Indoor Military Flag Set program will allow you to select a durable nylon indoor Air Force Flag and choose between premium quality poles, bases, and ornaments, and tassel. We also carry Indoor Air Force Flags if you are simply looking to replace the flag on your existing indoor presentation hardware.

Outdoor Air Force flags can be displayed on in-ground or wall-mount flagpoles outside of military complexes or at the homes of service members or veterans who are looking to proudly fly the colors of their military branch. If The Air Force is an important part of your identity and you are looking to display the Air Force flag outside your home, our Build Your Own Outdoor Military Flag Set program will allow you to choose between premium quality 6ft. poles and brackets to display the Air Force Flag on your front porch. 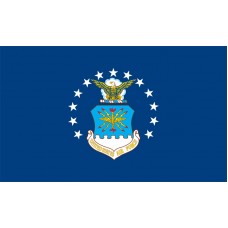 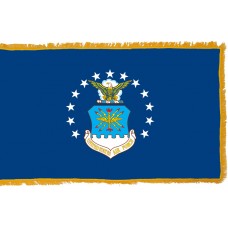 History of the Air Force Flag

The U.S Air Force Flag features a blue background with the United States Air Force seal emblazoned upon the center. The seal is surrounded by an arch of thirteen 5-pointed stars. Above the seal is a Bald Eagle with its wings spread surrounded by a cloud formation. The eagle is perched on a silver and blue wreath. The seal is divided into two sections, one of which is blue and the other white. A series of yellow thunderbolts are displayed on top of the blue section of the shield. At the bottom of the shield is a white scroll that reads, "United States Air Force."

The thirteen stars on the seal signify the thirteen original colonies, while the upper three stars which are grouped between the eagle's wings are representative of the three divisions of the Department of Defense (Army, Navy, & Air Force). The Bald Eagle is a widely recognized symbol of the United States of America, that has been popularly used since 1782. At the time, it was thought that Bald Eagles only existed in North America. The Bald Eagle embodies strength, majesty, and long-life which are qualities thought to reflect the United States. The clouds represent the beginning of a new sky, while the thunderbolts on the shield signify the power through air and space. The U.S Air Force Flag was adopted in 1951 by President Harry. S. Truman and is often flown during parades and ceremonies and is sometimes flown by members of the Air Force or veterans of the Air Force as a symbol of their pride.

The U.S. Air Force is a branch of the U.S. armed forces concerned with aerial and space warfare and defense including surveillance, and reconnaissance. It was first established as part of the U.S. Army in 1907, however, as technology expanded and air warfare become more critical, the Air Force was established as a separate branch of the military to exclusively focus on aeronautical warfare and defense. The US Air Force is the newest branch of the US Military, however, the US Government has recently proposed a US Space Force, which would be focused strictly on Space Warfare and would take over as the youngest branch. The U.S. Air Force is the largest air force in the world, comprised of over 300,000 active duty members. This military branch works with aircraft including bombers, helicopters, and fighters among many others.

The current US Air Force places a strong emphasis on research and development and as a result, boasts the most sophisticated air warfare technology in the world including stealth air planes which are able to travel undetected, high-tech defense satellites, advanced bombers, sensors, and much more. Additionally, the US Air Force is home to some of the most talented and well trained pilots in the world. In fact, during the past 40 years, US fighter pilots have not been defeated in a single air-to-air battle. As a result of the elite technology and forces, members of the Air Force have a strong sense of pride for their Military division. The US Air force is committed to anticipating and evolving to meet the changing threats which face the United States.

We offer free images of the Air Force Flag in four sizes (small, medium, large, and high resolution). These images are distributed royalty free for both personal and educational use and are ideal for use in projects and on websites. If you choose to use one of our images, attribution is appreciated, but not required.

The following html code snippets can be copied and pasted to add an image of the Air Force Flag to your website: