We carry authentic POW-MIA Flags in both indoor and outdoor varieties, both of which are proudly made in the United States. Our indoor flags are constructed from nylon and are finished with a pole hem and your choice of with or without beautiful white fringe. Our Our outdoor flags are constructed from your choice of nylon or polyester and are finished with a canvas header and brass grommets. Each of these flags is also available in single-sided or double-sided varieties. The double-sided flags feature a seal which is sewn onto both sides so that the emblem can be clearly understood in the correct orientation, regardless of which side it is viewed from. The Polyester flags are the most durable available, while the nylon flags are slightly lighter and fly better.

Indoor flags and presentation sets are often used for ceremonial purposes and at parades. If you are looking to purchase an indoor flag set, our Build Your Own Indoor Military Flag Set program will allow you to select a durable nylon indoor POW-MIA Flag and choose between premium quality poles, bases, and ornaments, and tassel. We also carry Indoor POW-MIA Flags if you are simply looking to replace the flag on your existing indoor presentation hardware.

Outdoor POW-MIA Flags can be displayed on in-ground or wall-mount flagpoles outside of military complexes, police stations, companies, or at the homes of service members, veterans, or civilians who are looking to proudly show their solidarity with members of the military who are missing in action or prisoners of war. If you are looking to display the POW-MIA flag outside your home, our Build Your Own Outdoor Military Flag Set program will allow you to choose between premium quality 6ft. poles and brackets to display the Navy Flag on your front porch.

Regardless of your application, we are looking forward to working with you to provide with flags, flagpoles, and hardware to meet the needs of your application. If you need assistance, please reach out to us by phone, email, or chat, and we will be happy to help. 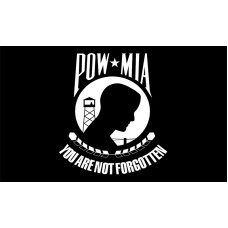 History of the POW-MIA Flag

The POW-MIA Flag which honors Prisoners of War and those Missing in Action is a civilian flag which features a stark black background. A circular white emblem shows a silhouette of a uniformed service person against a background of a guard tower and high fence. Above this are the initials POW * MIA, and below the words "You Are Not Forgotten."

The POW / MIA Flag is the official emblem of the National League of Families of American Prisoners and Missing in Southeast Asia. This association was formed in 1967 during the Vietnam War, when families in California and Virginia combined to put pressure on the US government to free captured American POWs and find the whereabouts of those certified as Missing in Action. Their efforts were successful, and the government changed its policies in 1969. The National League was officially Incorporated in 1970.

The League's success, and the issue of service personnel missing or taken prisoner was further highlighted in 1972. The work of the League was the main feature of an edition of Life Magazine, which published a full page photograph of Major Wilmer Grub, a United States Air Force pilot who had been shot down in 1966 and never heard from since.

Major Grubb was the husband of Evelyn Grubb, one of the founders of the National League of Families. By the time the Life article was published, she represented the League at Paris Peace Talks, as well as the United Nations and the White House. Through the League's success, Mrs. Grubb learned that her husband had in fact died when he was shot down.

1972 was also the year when the League designed the POW-MIA flag. Mrs. Grubb played a huge part in its adoption by military and civilian public services. It soon began to appear outside military and federal bases. Its popularity spread to police and fire stations, where it is still flown today.

The stark black and white design became especially associated with the Vietnam war. When that conflict ended, it left more than 1,600 service personnel unaccounted for. Tactics over their discovery and release led to a split in the League in the 1980s. This led to the formation of the National Alliance of Families For the Return of America's Missing Servicemen.

Both organizations are still firmly committed to highlighting the issue of those missing in action, including those lost in Vietnam. US Law requires the POW-MIA Flag to be hoisted at official US Government buildings on six important national holidays. These holidays include the third Saturday in May (Armed Forces Day), the last Monday in May (Memorial Day), June 14 (Flag Day), July 4 (Independence Day), the third Friday in September (National POW / MIA Recognition Day), and November 11 (Veterans Day.)

The POW-MIA flag is a non political emblem, which is embraced by Democrats and Republicans alike. It is also a valued way of showing civilian support and concern for the armed forces. It is a visual reinforcement of the military vow never to leave an injured comrade on the battlefield. Many private citizens and military veterans display the POW-MIA Flag in front of their homes as a show of solidarity and support for service members who or missing in action or being held prisoner.

We offer free images of the POW-MIA Flag in four sizes (small, medium, large, and high resolution). These images are distributed royalty free for both personal and educational use and are ideal for use in projects and on websites. If you choose to use one of our images, attribution is appreciated, but not required.

The following html code snippets can be copied and pasted to add an image of the POW-MIA Flag to your website: