Indoor flags and presentation sets are often used for ceremonial purposes and at parades. If you are looking to purchase an indoor flag set, our Build Your Own Indoor Military Flag Set program will allow you to select a durable nylon indoor Navy Flag and choose between premium quality poles, bases, and ornaments, and tassel. We also carry Indoor Navy Flags if you are simply looking to replace the flag on your existing indoor presentation hardware.

Outdoor Navy flags can be displayed on in-ground or wall-mount flagpoles outside of military complexes or at the homes of service members or veterans who are looking to proudly fly the colors of their military branch. If The Navy is an important part of your identity and you are looking to display the Navy flag outside your home, our Build Your Own Outdoor Military Flag Set program will allow you to choose between premium quality 6ft. poles and brackets to display the Navy Flag on your front porch. 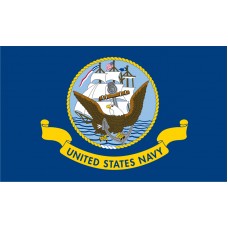 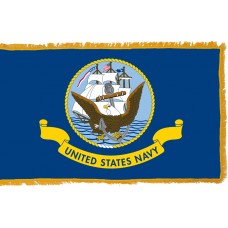 History of the US Navy Flag

The US Navy flag features a dark blue background with the Seal of the US Department of the Navy positioned at its center. This seal is comprised of a rigged ship, an anchor and an American Bald Eagle. Beneath the seal is a yellow banner with bold blue text that reads, "United States Navy."

The US Navy Flag is not actually flown on naval ships at sea, but rather is used for ceremonial purposes, at parades, and indoors at land-based Naval facilities. It is also sometimes flown on US Naval ships at port. When at sea, US Navy vessels hoist the US Coast Guard Ensign. The flag is also commonly flown at by veterans of the US Navy who feel a strong sense of pride and identity with this military branch.

The current official flag design was adopted by the US Navy on April 24th, 1959 by executive order from President Dwight D. Eisenhower. Before this, the Navy's unofficial flag had been the Infantry Battalion Flag. This flag was comprised of a simple design of a dark blue background and a white diamond shape in the center housing a dark blue anchor. The executive order specified the dimensions and design of the flag, as well as the proper etiquette for its display. The Order also sets out the design of related Streamers which can be added to the flag representing combat honors won in both wartime and peacetime operations. The US Navy is the largest force of its type in the world, and as such, many of these honors are won during peacetime across the world's oceans and seas.

The United States Navy is the 3rd largest of the 7 United States uniformed services. It has its roots in the 2nd Continental Congress of 1775, during the American Revolutionary War. That Congress was not convinced of the benefits of having a standing navy, as the British Royal Navy would inevitably be much more powerful. George Washington, however, pushed for the formation of the US Navy, and eventually convinced the Congress of its merits. He commissioned the USS Hannah, the first designated United States Ship. It had some success, and the Congress commissioned two further vessels. The Continental Navy was established on 13 October 1775.

During the Revolutionary War, the newly formed navy had limited success, however, it was poorly funded, and after the War was over, the Continental Navy had no actual ships. This left the new nation's merchant ships vulnerable to attack, especially by the Barbary Pirates.

Economic damage to the country was such that Congress passed the Naval Act of 1794, which established a permanent, standing navy as of March 24th of that year. Much of the pressure put on Congress to take this action was brought by John Adams, the country's 2nd President, whose efforts earned him the nickname, "father of the American Navy."

The new service developed quickly and began to have more and more success, which was highlighted in the War of 1812. By the time of the Civil War, its strength gave the Union forces a major advantage over the Confederacy.

We offer free images of the Navy Flag in four sizes (small, medium, large, and high resolution). These images are distributed royalty free for both personal and educational use and are ideal for use in projects and on websites. If you choose to use one of our images, attribution is appreciated, but not required.

The following html code snippets can be copied and pasted to add an image of the Navy Flag to your website: