Indoor flags and presentation sets are often used for ceremonial purposes and at parades. If you are looking to purchase an indoor flag set, our Build Your Own Indoor Military Flag Set program will allow you to select a durable nylon indoor Coast Guard Flag and choose between premium quality poles, bases, and ornaments, and tassel. We also carry Indoor Coast Guard Flags if you are simply looking to replace the flag on your existing indoor presentation hardware.

Outdoor Coast Guard flags can be displayed on in-ground or wall-mount flagpoles outside of military complexes or at the homes of service members or veterans who are looking to proudly fly the colors of their military branch. If The Coast Guard is an important part of your identity and you are looking to display the Coast Guard flag outside your home, our Build Your Own Outdoor Military Flag Set program will allow you to choose between premium quality 6ft. poles and brackets to display the Coast Guard Flag on your front porch. 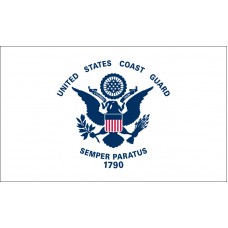 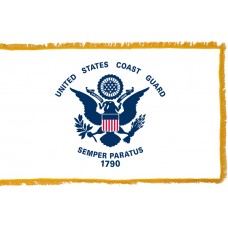 History of the Coast Guard Flag

The current United States Coast Guard flag was adopted on January 28th, 1964. The Flag features a white background with a dark blue version of the United States Great Seal placed prominently in the center. The Great Seal features an eagle with his wings spread open and a shield on his chest. The shield contains thirteen alternating red and white stripes which represent the original thirteen colonies and ties into the US flag design. The eagle is grasping thirteen arrows in his left claw and an olive branch in his right claw. This imagery represents the United States' strong preference for peace, however, acknowledges that our country is always prepared and willing to use military action if necessary to defend our nation. The eagle's head is facing the olive branch which demonstrates our countries desire for peace above everything else. In his beak, the eagle is holding a scroll upon which the countries motto is written, "E Pluribus Anum," which translates as, "Out of many, one." Above the eagles head is a cloud formation with thirteen stars representing the thirteen colonies.

Above the Great Seal is bold blue arched text which reads, "United States Coast Guard" and below the seal reads, "Semper Paratus" in a reverse arch shape; This phrase translates as "always ready." Beneath that is the text, "1970," which is the year the Revenue Cutter service was formed which was the precursor from which the United States Coast Guard originates.

The red, white, and blue colors chosen pay homage to the flag of the United States of America. White is also said to represent innocence and purity, the red also stands for bravery and hardiness, and blue is also symbolic of perseverance.

The United States Coast Guard was established to "protect people, environment, industry, and security of the United States of America on seas, lakes and rivers." It is the oldest sea service of the United States as well as the smallest branch of the military. This military branch utilizes boats, ships, and airplanes to prevent crimes, such as smuggling and to rescue other boats and ships that have come into harm's way. In 1790, the Revenue Cutter Service was established following George Washington signing an act which would allow for 10 boats (which were also known as cutters) to be built with the intention of collecting customs, duties, and taxes and to ensure that shipments to different countries were reaching their destination. In 1791, the first cutter (known as "The Vigilant) was launched. In 1915, President Woodrow Wilson merged the Revenue Cutter Service with the United States life-saving services to form The United States Coast Guard, a new branch of the military.

One of the unique facts about the Coast Guard is that it actually has two flags. The flag flown on ships is called the Coast Guard Ensign, whereas the Coast Guard Flag is used for ceremonial purposes during parades and special events as a symbol of the US Coast Guard. It is also sometimes flown by veterans of the coast guard or their family members as a show of pride.

We offer free images of the Coast Guard Flag in four sizes (small, medium, large, and high resolution). These images are distributed royalty free for both personal and educational use and are ideal for use in projects and on websites. If you choose to use one of our images, attribution is appreciated, but not required.

The following html code snippets can be copied and pasted to add an image of the Coast Guard Flag to your website: