Indoor flags and presentation sets are often used for ceremonial purposes and at parades. If you are looking to purchase an indoor flag set, our Build Your Own Indoor Military Flag Set program will allow you to select a durable nylon indoor Army Flag and choose between premium quality poles, bases, and ornaments, and tassel. We also carry Indoor Army Flags if you are simply looking to replace the flag on your existing indoor presentation hardware.

Outdoor Army flags can be displayed on in-ground or wall-mount flagpoles outside of military complexes or at the homes of service members or veterans who are looking to proudly fly the colors of their military branch. If The Army is an important part of your identity and you are looking to display the Army flag outside your home, our Build Your Own Outdoor Military Flag Set program will allow you to choose between premium quality 6ft. poles and brackets to display the Army Flag on your front porch. 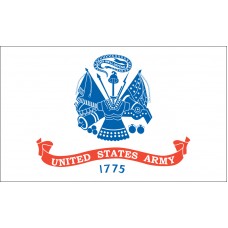 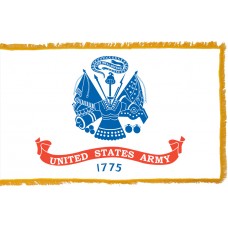 History of the Army Flag

The U.S. Army Flag features a white background with a blue version of the "War Office Seal" emblazoned upon the center. Underneath the seal is a red scroll that reads, "United States Army" and beneath that is bold blue text reading, "1775." The War Office Seal features Roman armor, a sword with a Phrygian Cap, which is sometimes liberty cap on its end, an espontoon (European polearm that was used by officers), a bayonet, a cannon, cannonballs, a musket, mortar, mortar bombs, a drum, drumsticks, and a rattle snake holding a scroll that reads, "This We'll Defend."

The armor, sword and espontoon represent the U.S. Army's strength in defending the country, while the bayonet, cannon, cannonballs, mortar, and musket represent early weaponry that was used by the army. The drum and drumsticks as well as the Army's motto, "This We'll Defend," are both intended communicated the US Army's willingness to defend and serve the people of the United States. The 1775 is indicative of the year that the Continental Army, which served as the foundation for today's US Army was formed. The Rattle snake that is holding the scroll is a common symbol used in flags from the Revolutionary War period in the United States including the Gadsden Flag, Culpepper Flag, and others.

This Flag features 5 colors: red, white, blue, black, and gold. The Red, white, and blue colors are chosen to pay homage to the official colors of the United States. Additionally, the blue color is said to represent loyalty, red stands for courage, white is symbolic of service, gold stands for honor, and black represents determination.

The U.S Army Flag was adopted on June 12th, 1956 by President Dwight. D. Eisenhower following Secretary of the Army, Wilber. M. Brucker's request to create a flag that was representative of the Army. At the time, the US Army was the only branch of the US Military without an official flag. The flag is flown over United States Army installations and no other flag may be flown over the Army Installations apart from the national flag of the United States.

The U.S. Army is a branch of the United States of America's armed forces which focuses on land-based military operations and national defense. It is the oldest branch of the armed forces. Prior to the United States of America being officially established as a country, the Continental Army was formed in order to fight during the American Revolutionary War. George Washington Led the Continental Army to Victory against Great Brittan.

The majority of the soldiers in the Continental Army had served previously in the British army. After the United States of America was established as a country, the continental army was disbanded and the "Regular Army" was formed on June 3rd, 1784. The Regular army was reorganized and established in 1791 as the "Legion of the United States" and in 1796, the name was changed to the "United States Army."

The official mission of the U.S. Army as outlined in US Code is stated as the following:

We offer free images of the Army Flag in four sizes (small, medium, large, and high resolution). These images are distributed royalty free for both personal and educational use and are ideal for use in projects and on websites. If you choose to use one of our images, attribution is appreciated, but not required.

The following html code snippets can be copied and pasted to add an image of the Army Flag to your website: