Our Service Banners are printed with vibrant inks on a durable satin material. These flags are offered with 1, 2, or 3 blue stars to honor active military members in your family or 1 or 2 gold stars to honor military members in your family who have made the ultimate sacrifice. These flags are proudly manufactured in the United States and are mounted on a crossbar with gold cord and tassel. They measure 8" x 15" and feature a White background with a red border on 4 sides. We also offer a 3ft x 5ft "We Honor Those Who Serve" flag which pays tribute to all active duty US military members. 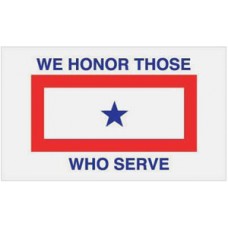 We Honor Those Who Serve Flag

The design for service banners was created by Robert Queisser in 1917 to honor his two active-duty sons serving in the military during World War I. The flag became popular amongst the families of military members and was eventually officially adopted by various government agencies. The flag was originally symbolic only of WWI service members, however, its use was subsequently expanded to include World War II service members and its symbolism was eventually expanded to include service members in any US Military conflict. The flag waned in popularity during the Vietnam War, however, there was a resurgence in popularity during the US military conflicts after September 11, 2001.

As a result of the popularity of service flags, a colloquialism has developed that a "Blue Star" family member is someone who is related to an active duty military member, while a "Gold Star" family member is related to someone who died while serving in the US Military. For example, a gold star wife would be someone whose husband died during service, while a blue star mother would be the mother of a child currently serving in a military conflict. The gold star distinction is also sometimes applied to those who died after their service as a result of injuries incurred during service. In 1936, the US Government resolved that the last Sunday in May would be be "Gold Star Mothers Day." In 2009, President Barrack Obama expanded to holiday to be "Gold Star Mother's and Families' Day.

The traditional service banners are designed with either blue or gold stars, however, a new distinction called, "Silver Star" has developed. The silver star is a symbol of military members who have incurred serious injury which prevents them from continuing service. Families of injured soldiers are said to be, "Silver Star Families." Silver Star flags are flown to honor family members who have been seriously injured during service. The US House of Representatives passed a resolution on April 21, 2010, making May 1 an annual holiday called, "Silver Star Service Banner Day," where silver star banners are to be flown in honor of Silver Star Veterans and their families.

In modern times, it is common for families with active duty military members to display the service banners at their home or office. Companies or organizations who employ active duty service members have also been known to fly a flag in the honor of their team members. The US government specifies that Service Banners must be manufactured in the United Sates by companies with specific permission. When displayed next to the American Flag, the US Flag must be larger and displayed in a more prominent position, according to US Flag Code.