Indoor flags and presentation sets are often used for ceremonial purposes and at parades. If you are looking to purchase an indoor flag set, our Build Your Own Indoor Military Flag Set program will allow you to select a durable nylon indoor Merchant Marines Flag and choose between premium quality poles, bases, and ornaments, and tassel. We also carry Indoor Merchant Marines Flags if you are simply looking to replace the flag on your existing indoor presentation hardware. 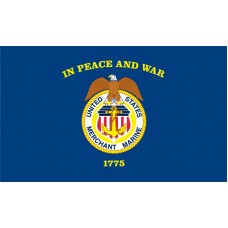 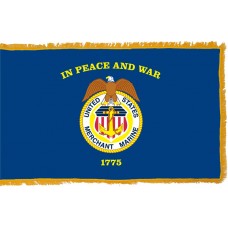 History of the Merchant Marines Flag

The United States Merchant Marines Flag was adopted on May 24th, 1994. The flag features a dark blue background with an eagle standing atop a shield which is emblazoned upon the center of the flag. The shield is comprised of red, white, and blue stripes and features an anchor wrapped in a rope. Arched blue text around the shield reads, "United States Merchant Marine," upon a white background. Above the shield in bold yellow text reads, "In Peace and War." Below the shield, the year, "1775" is printed on the flag in yellow. The flag was designed by the United States Army's Institute of Heraldry and was unveiled by the maritime administrator Albert. J. Herberger. The flag serves to honor the Merchant Marines and Civilians who have risked their lives in service the US Military throughout the history of our country. This flag is primarily used for ceremonial purposes, parades, and indoor use.

The United States Merchant Marines consists of ships (such as, oil tankers, ferries, freighters, and cruise ships) that are owned by companies or individuals and controlled by the government. These ships are sometimes required to work for the armed forces during periods of battle and conflict. During wartime, the ships will deliver personnel and military material and during peacetime, the ships are used mainly to transport passengers and cargo. The ships do not have a role in combat but just to serve and help during the times of combat.

The United States Merchant Marines have served during very important military struggles, such as the Vietnam War, Korea War, and most importantly World War II, where the Merchant Marines served the country by moving food and other materials required by the combat forces across the Atlantic and Pacific Oceans. In fact, during World War II, the merchant marine suffered the highest rate of casualties, more than any other service or branch of the armed forces. 733 American cargo ships were lost during the struggle and about 1 in 26 mariners lost their lives. Most recently, in 2003, 40 merchant marine vessels were utilized to transport supplies and equipment for the Army and Navy in support of Operation Iraqi Freedom.

The history of the merchant marines dates back to the 1600s when the first English Colony was established and became reliant on exports to England (mainly tobacco) as well as settlers bringing horses, cattle, and sheep to the area. From this time, shipbuilding became an important and sizeable industry. By 1776, with the success of the shipbuilding industry and shipping industry, many ports began to specialize in merchant shipping which mainly included tobacco and rice and other manufactured goods. While they were still British colonists, the merchant vessels were protected by the Royal Navy, but by 1783, following the American Revolutionary War, America was responsible for the safety of the merchant vessels and civilians. During war-times, the government found that it needed to utilize all resources possible including civilian ships and thus the Merchant Marines was founded. The Current Merchant Marines is comprised of about 465 vessels.

We offer free images of the Merchant Marines Flag in four sizes (small, medium, large, and high resolution). These images are distributed royalty free for both personal and educational use and are ideal for use in projects and on websites. If you choose to use one of our images, attribution is appreciated, but not required.

The following html code snippets can be copied and pasted to add an image of the Merchant Marines Flag to your website: