Indoor flags and presentation sets are often used for ceremonial purposes and at parades. If you are looking to purchase an indoor flag set, our Build Your Own Indoor Military Flag Set program will allow you to select a durable nylon indoor Marine Corps Flag and choose between premium quality poles, bases, and ornaments, and tassel. We also carry Indoor Marine Corps Flags if you are simply looking to replace the flag on your existing indoor presentation hardware. 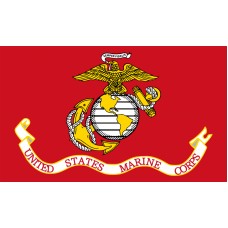 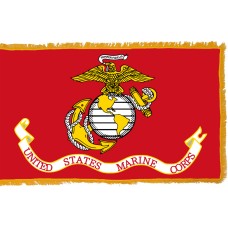 History of the Marine Corps Flag

The United States Marine Corps flag features a red background with an eagle positioned in the center, perched on top of a globe. The eagle carries a banner in his beak that reads, "Semper Fidelis," which is the Marine Corps Motto and translates in Latin to, "Always Faithful." This latin phrase is also the title of the Corps March, which was created byJohn Philip Sousa. The globe is tied with a rope, which is attached to an anchor. Beneath the globe is a white banner, outlined in gold with red text that reads, "United States Marine Corps."

The eagle, globe, and anchor emblem, whereby an Eagle stands atop a globe with a rope and anchor is the official emblem of the U.S. Marine Corps. The eagle imagery is representative of the United States of America, the globe represents the Western hemisphere, and the Marine Corps willingness to serve anywhere in the world, and the anchor represents the tradition of the marines and their work and service in the Department of the Navy.

The red and gold colors of the flag were established as the official colors of the marines in 1925 and the United States Marine Corps Flag was officially adopted on January 18th, 1939. The flag is primarily used for ceremonial purposes and in parades, however, is also frequently displayed by veterans of the Marine Corps who are looking to show their pride.

In 1775, Samuel Nicholas formed two units of marine forces called the Continental Marines of the American Revolutionary War who were able to fight on both sea and land. After the Revolutionary War, the Continental Marines where disbanded, however, in 1798, the US Marine Corps was created by congress to provide the necessary defense for the country.

The United States Marine Corps are a branch of the Department of the Navy and are considered to be one of the premier military forces on the planet. In order to be accepted into the marine corps, applicants must pass the Armed Services Vocational Aptitude Battery (ASVAB) test, which measures aptitudes pertaining to various areas including reading, writing, mathematics, science, mechanical understanding, and more. The Marines are comprised of around 174,000 service members who work in tandem with the Navy to protect naval ships and bases and are also responsible for many complicated tasks such as operating advanced aircraft, gathering intelligence, and repairing sophisticated equipment, among many others. Moreover, Marines are deployed around the world and can be mobilized very quickly to protect and defend the United States and the country's interests. The Marines have been mobilized in every war in US history and are typically the first forces called into action.

The Marines are the smallest branch of the military amongst the four military divisions in the Department of Defense. As a result, the recruiting slogan used by the Marines is, "The Few, The Proud." Additionally, because of the exclusivity of the Marines, US Marines flags tend to be the most popularly purchased Military flags since there is an incredible amount of pride amongst veterans and current members.

We offer free images of the Marine Corps Flag in four sizes (small, medium, large, and high resolution). These images are distributed royalty free for both personal and educational use and are ideal for use in projects and on websites. If you choose to use one of our images, attribution is appreciated, but not required.

The following html code snippets can be copied and pasted to add an image of the Marine Corps Flag to your website: