We carry historical reproductions of the Commodore Perry Flag, which are proudly manufactured in the United States from durable and light-weight nylon and are printed with vibrant lasting colors. Our outdoor flags are finished with a canvas header and brass grommets. We offer the Commodore Perry Flag in a wide range of sizes, which is unmatched by the competition. Available sizes include: 2' x 3', 3' x 5', 4' x 6', 5' x 8', and 6' x 10'.

The Commodore Perry Flag can be displayed on boats, or on in-ground or wall-mount flagpoles at the homes of people who are looking to pay homage to our nation's history. If you are looking for a complete wall-mount flagpole set, our Build Your Own Outdoor Historical Flag Set program will allow you to choose between premium quality 6ft. poles and brackets to display the Commodore Perry Flag on your front porch. 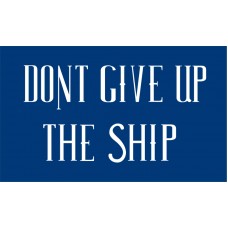 History of the Commodore Perry Flag

The Commodore Perry Flag Features a vibrant blue background with bold white text emblazoned upon it that reads, "Don't Give Up The Ship." These were the last words uttered Captain James Lawrence aboard USS Chesapeake after being wounded during battle on June 1, 1813 and dying months later.

Oliver Hazard Perry was a naval commander from South Kingstown, Rhode Island, who is most famous for his role in the War of 1812 during the Battle of Lake Erie in 1813 where he lead the US Navy to victory. When Perry arrived at Presque Isle on Lake Erie, he learned that good friend James Lawrence had died. In response, Perry renamed the ship from the USS Chesapeake after him to the USS Lawrence. Later, Perry had a conversation with his friend, Purser Samuel Hambleton, where he indicated that he wanted to create a battle flag to encourage his fleet. Hambleton suggested using Lawrence's words, "Don't Give Up The Ship" and then arranged the creation of the flag by hiring Margaret Foster Steuart, a seamstress from Pennsylvania. She created the flag in a few days with the help of her daughters, nieces, and cousin.

On September 10, 1813, Perry lead his forces into battle against the Royal Navy in the Battle of Lake Erie aboard the USS Lawrence with his flag being flown above. During Battle, the USS Lawrence was decimated, being reduced to a ship wreck, where 80% of the crew was killed or wounded. When the boat become unusable, Perry rowed to the USS Niagara and briefly surrendered the USS Lawrence. The only possession he took with him was his flag bearing, "Don't Give Up The Ship," which he transferred to the Niagara. At this point, the British thought the Americans were retreating and briefly ceased fire, however, Perry regrouped and led his forces to victory aboard the Niagara. At the conclusion of the battle, the British surrendered to Perry on the Deck of the USS Lawrence, which Perry and his forces has recaptured.

After the battle, the US Squadron captured the entire squadron of the Royal Navy. Perry's report to General William Henry Harrison (who would later go on to be President) indicated, "We have met the enemy and they are ours." Today, the original flag is on display at the at the United States Naval Academy Museum in Maryland.

Perry's victory at the Battle of Lake Erie is commemorated by the, "Perry's Victory and International Peace Memorial," which is located in Put-in-Bay, OH. The memorial is the world's largest Doric column standing at 352 ft tall.

Oliver Perry's younger brother, Matthew C. Perry was also a commodore in the US Navy who became famous for his work commanding ships to orchestrate Peace between the United States and Japan. Interestingly, Matthew C. Perry also has a flag named in his honor, which is an American Flag with a slightly altered star pattern that was flown on his vessels.

In modern times, the Commodore Perry flag appeals to history lovers and patriotic Americans alike, serving as a reminder of perseverance, determination, the resiliency of the US Navy, and a simple call to action.

We offer free images of the Commodore Perry Flag in four sizes (small, medium, large, and high resolution). These images are distributed royalty free for both personal and educational use and are ideal for use in projects and on websites. If you choose to use one of our images, attribution is appreciated, but not required.

The following html code snippets can be copied and pasted to add an image of the Commodore Perry Flag to your website: