We carry historical reproductions of the Gadsden Flag, which are proudly manufactured in the United States from durable and light-weight nylon and are printed with vibrant lasting colors. Our outdoor flags are finished with a canvas header and brass grommets. We offer the Gadsden Flag in a wide range of sizes, which is unmatched by the competition. Available sizes include: 2' x 3', 3' x 5', 4' x 6', 5' x 8', and 6' x 10'.

The Gadsden Flag can be displayed on in-ground or wall-mount flagpoles at the homes of people who are looking to pay homage to our nation's history. If you are looking for a complete wall-mount flagpole set, our Build Your Own Outdoor Historical Flag Set program will allow you to choose between premium quality 6ft. poles and brackets to display the Gadsden Flag on your front porch. 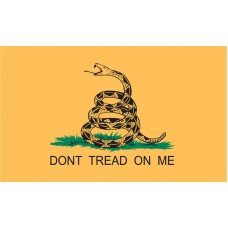 History of the Gadsden Flag

The Gadsden Flag is a striking emblem of US independence which features a yellow field with a coiled rattle snake on a patch of green grass. The rattle snake appears angry and ready to attack. Underneath this motif is bold black text which reads, "Don't Tread On Me." The flag was designed by Christopher Gadsden and was flown as a symbol of the continental marines during the Revolutionary war. Like the Culpepper Flag and others adopted during the Revolutionary War, The Gadsden Flag has seen a resurgence in popularity in recent years.

In the Autumn of 1775, The Continental Army was severely depleted of supplies and ammunition and the British forces had placed Boston under Marshall Law. Meanwhile, an American merchant ship called The Black Prince had just returned to Philadelphia from England with information indicating that the British government was sending 2 ships to America with supplies including gun powder which was badly needed.

Congress authorized the creation of the Continental Navy to attack the British ships and take possession of the supplies and ammunition. The purpose was to both provide the Continental Army with badly needed supplies and deplete the British. The original Continental Navy was comprised of just four ships, including the Black Price, which was renamed to The Alfred. All of the ships used were merchant ships which were re-outfitted and repurposed as military vessels.

Christopher Gadsen was a representative of South Carolina in Congress. Gadsden had served in the British Royal Navy, and been sent to school near Bristol, England. He understood naval management extremely well and was able to use this experience to great effect in forming the marine section of the Continental Navy. This wealth of experience made Christopher Gadsden an extremely important figure in the Revolutionary Wars and as such, he was selected as one of the committee of seven people who were assigned to outfit the four vessels. Before the departure of the first mission, Gadsden along with the rest of Congress was responsible for the selection of Esek Hopkins as the first (and only) commander-in-chief of the Navy. Christopher Gadsden felt it was important for the commander to fly a unique flag and presented him his Gadsden Flag which was flown aboard the USS Alfred.

To aid in their mission, congress also ordered five companies of the Continental Marines to join the newly-formed navy in their mission. Some of the Marines coincidentally carried drums which had been painted yellow, with a coiled Rattle Snake and the text, "Don't Tread On Me."

The Rattle Snake imagery can be traced to Benjamin Franklin who published an image of a rattle snake cut in pieces (each of which represented one of the colonies) and suggested sarcastically that they should "thank" the British for sending convicted criminals to the colonies by sending rattle snakes to the British. The Timber Rattlesnake is a Venomous Viper that is most common in North America. The Rattle Snake was used as a symbol of the American spirit and of the colonies. Rattlesnakes were a popular image used to represent the military, since it was said that they do not attack provoked, which was the principles held by the American Military.

The phrase, "Don't Tread on Me," is also a common phrase that was used in the colonies in reference to the over-encroachment of the British power during the Revolutionary War period. This message was also used on the Culpeper Flag and the First Navy Jack Flag.

The Gadsden Flag is an extremely popular flag today, serving as a representation of the determination and resolve of the US Military during the Revolutionary War. Additionally, the flag has come to represent the Tea Party political movement in the United States, which has resulted in controversy over the flag, which was never Gadsden's intention. This flag was created and should serve as a rally call for America and as a representation of the United States triumph for independence over Great Brittan.

We offer free images of the Gadsden Flag in four sizes (small, medium, large, and high resolution). These images are distributed royalty free for both personal and educational use and are ideal for use in projects and on websites. If you choose to use one of our images, attribution is appreciated, but not required.

The following html code snippets can be copied and pasted to add an image of the Gadsden Flag to your website: