We carry historical reproductions of the Bennington Flag, which are proudly manufactured in the United States from durable and light-weight nylon and are printed with vibrant lasting colors. Our outdoor flags are finished with a canvas header and brass grommets. We offer the Bennington Flag in a wide range of sizes, which is unmatched by the competition. Available sizes include: 2' x 3', 3' x 5', 4' x 6', 5' x 8', and 6' x 10'.

The Bennington Flag can be displayed on in-ground or wall-mount flagpoles at the homes of people who are looking to pay homage to our nation's history. If you are looking for a complete wall-mount flagpole set, our Build Your Own Outdoor Historical Flag Set program will allow you to choose between premium quality 6ft. poles and brackets to display the Bennington Flag on your front porch. 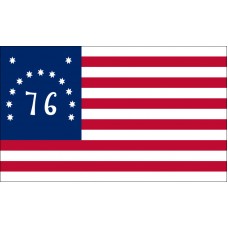 History of the Bennington Flag

The Bennington Flag is a variation of the US Flag which features 7 white stripes and 6 red stripes, which is different from the American Flag which is comprised of 6 white stripes, and 7 red stripes. The result of the 7 white stripes is that they are featured at the top and bottom of the flag, whereas the standard American Flag features a red stripe at the top and bottom. The blue canton in the top left corner features 11 seven-pointed white stars in an arch shape, plus two additional stars, one in the each of the top corners. The total number of stars is 13 and the total number of stripes is also 13, both of which reference the 13 original colonies. Underneath the arch of stars is the text, "76," in a bold white font, a reference to the Declaration of Independence in 1776.

Vexillological experts believe that is unlikely that the flag was actually flown at the Battle of Bennington as the fabric is determined to have been created with machine-woven cotton fabric as opposed to the linen fabric that would have been used at the time, which indicates that the flag was manufactured in the 19th century. Moreover, the inclusion of the number, "76," is typical of flags used to commemorate the revolutionary war, rather than flags used during the war and there is no other documented use of seven-pointed stars until the 19th century. Most experts believe the flag was probably produced in the 1820's to commemorate the 50th anniversary of the Revolutionary War.

The Flag that experts believe Undisputedly was flown at the Battle of Bennington was the "Green Mountain Boys Flag."

The Battle of Bennington was fought on 16 August, 1777 as part of the American Revolutionary War. Bennington is a town in Vermont, but the actual battle was fought in New York State, in Walloomsac, about 10 miles west of Bennington.

The Battle of Bennington proved to be a pivotal encounter in the American Revolutionary War. The decisive victory by the 13 colonies sent a strong message to Great Brittan that total defeat was imminent and inevitable. By 1777, the British government had already come to terms with losing New England to its former colonists. Its strategy was to separate New England from those colonies to the south, including Vermont. They considered Vermont to be more loyal to the British crown than Massachusetts, New Hampshire, and other New England territories.

The revolutionaries fought a coalition of British, German, Canadian, Loyalist, and Native American forces. The Green Mountain Boys, a militia established by Ethan Allen in the 1760s, were a large part of the soldiery which defeated this coalition. This type of home grown army still resonates with many modern Americans who treasure their independent, revolutionary spirit.

The Bennington Flag is both a commemoration of an event in history and an acclamation of current values. Its distinctive design is reminiscent of the current American Flag, yet includes the "76" numerals and 13 stars pay tribute to our nation's history, making this both recognizable as a symbol of America today and of our country's past.

We offer free images of the Bennington Flag in four sizes (small, medium, large, and high resolution). These images are distributed royalty free for both personal and educational use and are ideal for use in projects and on websites. If you choose to use one of our images, attribution is appreciated, but not required.

The following html code snippets can be copied and pasted to add an image of the Bennington Flag to your website: