We carry historical reproductions of the French Fleur De Lis Flag, which are proudly manufactured in the United States from durable and light-weight nylon and are printed with vibrant lasting colors. Our outdoor flags are finished with a canvas header and brass grommets. We offer the French Fleur De Lis Flag in a wide range of sizes, which is unmatched by the competition. Available sizes include: 2' x 3', 3' x 5', 4' x 6', 5' x 8', and 6' x 10'.

The French Fleur De Lis Flag can be displayed on in-ground or wall-mount flagpoles at the homes of people who are looking to pay homage to their French heritage. If you are looking for a complete wall-mount flagpole set, our Build Your Own Outdoor Historical Flag Set program will allow you to choose between premium quality 6ft. poles and brackets to display the French Fleur De Lis Flag on your front porch. 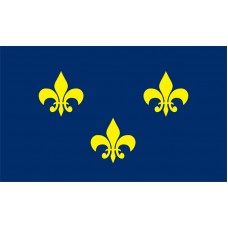 The French Fleur de Lis Flag is comprised of three traditional French Fleurs de Lis emblems upon a deep blue background. The use of three emblems are representative of the Holy Trinity. This design was carried by the French armies as they conquered colonies in the New World and is still an important symbol in France and other parts of the world including the Americas.

The Fleur de Lis symbol itself is a designed to look like a stylized lily with its three petals tied together. The Fleur de Lis is well known as a symbol of the French Monarchy, where it appeared on their royal coat of arms in gold on a blue background. Although modern day France is a single entity, during its history it consisted of many kingdoms and provinces, all of which were united by their Catholic Faith. The lily is a symbol of purity, and was adopted by the French royal family during the Middle Ages.

The triple lily design of the French Fleur de Lis Flag was introduced by Charles V in the 14th Century. Charles was the head of the House of Valois, which ruled those parts of France not controlled by other countries, such as England. At his Coronation in 1364, France was embroiled with England in the Hundred Years War. Charles adopted and tripled the Fleur de Lis to inspire his troops.

The Fleur de Lis is associated with many French saints, especially Saint Joseph. Knowing of its deep religious significance, Charles V employed it to great effect. He was a very successful monarch, scoring significant victories against England and regaining much French territory. After his death, Charles V was held in high esteem by future generations, and his triple Fleur de Lis flag was carried proudly by French explorers in the New World.

During the 16th and 17th Centuries, France continued competing with England and other European powers to acquire colonial territories across the world. Where they were successful, the Fleur de Lis Flag became associated with their conquests. In certain provinces and cities in North America, the Fleur de Lis Flag is still flown proudly.

New Orleans in particular is associated with the Fleur de Lis. It is the emblem of the New Orleans Saints football team, and has gained in popularity in the city since Hurricane Katrina. Since 2008, the Fleur de Lis has been an officially recognized symbol of the state of Louisiana.

The Fleur de Lis also appears on the Canadian national coat of arms, and the provincial flags of Nova Scotia and Quebec. French influence in the establishment of cities and towns mean the design can be found on municipal flags and coats of arms. These include Detroit, Louisville, and St. Louis.

As France played a big part in the formation of both Canada and the United States of America, the Fleur de Lis flag retains significance in many parts of the continent. Although seen by some as a reminder of past colonial settlers, for many it provides a sign of identity and continuity. With origins in medieval Europe, the French Fleur de Lis flag remains important to this day.

We offer free images of the French Fleur de Lis Flag in four sizes (small, medium, large, and high resolution). These images are distributed royalty free for both personal and educational use and are ideal for use in projects and on websites. If you choose to use one of our images, attribution is appreciated, but not required.

Add the French Fleur de Lis Flag to your Website:

The following html code snippets can be copied and pasted to add an image of the French Fleur de Lis Flag to your website: