We carry historical reproductions of the Bunker Hill Flag, which are proudly manufactured in the United States from durable and light-weight nylon and are printed with vibrant lasting colors. Our outdoor flags are finished with a canvas header and brass grommets. We offer the Bunker Hill Flag in a wide range of sizes, which is unmatched by the competition. Available sizes include: 2' x 3', 3' x 5', 4' x 6', 5' x 8', and 6' x 10'.

The Bunker Hill Flag can be displayed on in-ground or wall-mount flagpoles at the homes of people who are looking to pay homage to our nation's history. If you are looking for a complete wall-mount flagpole set, our Build Your Own Outdoor Historical Flag Set program will allow you to choose between premium quality 6ft. poles and brackets to display the Bunker Hill Flag on your front porch. 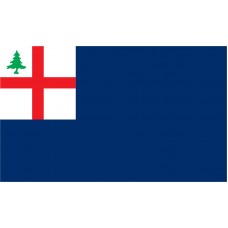 History of the Bunker Hill Flag

The Bunker Hill Flag features a striking blue background with a white canton in the upper left corner. Inside of the canton is a red St. George's Cross with a green pine tree in the top left quadrant of the canton. The St. Georges Cross represents ties to England, while the Pine Tree is a symbol of the New England region of the United States. The legend is that this flag was flown at the Battle of Bunker Hill in 1775, however, that claim has been called into question by historical and Vexillological experts.

The most commonly accepted explanation for the Blue Bunker Hill Flag is that it was the result of an error made by someone who was creating flag charts hundreds of years ago, whereby, they incorrectly filled in the Flag of New England with a blue background instead of red. Moreover, most historians believe that the Union forces likely did not carry any flag at Bunker Hill since they were so disorganized.

Despite the fact that this design is likely historically inaccurate, the blue Bunker Hill flag design is flown today as a symbol of The Battle of Bunker Hill. Even though the British won this battle, the British experienced so many casualties that the battle at Bunker Hill proved that even though the Continental Army was an inexperienced, rag-tag bunch, they were able to stand up to the experienced British military. The Continental army did suffer the deaths of General Joseph Warren and Major Andrew McClary during the battle, however, overall many fewer members were lost or injured compared to the British casualties. This battle swayed the war since the British took a much more cautious approach after this, which actually ended up leading to the Continental Army's victory and American Independence.

the Bunker Hill Flag is still flown outside of many homes and buildings as a symbol of the success of the struggle for American independence. While the design of the modern Bunker Hill Flag may not be historically accurate, it still maintains significance for many Americans.

We offer free images of the Bunker Hill Flag in four sizes (small, medium, large, and high resolution). These images are distributed royalty free for both personal and educational use and are ideal for use in projects and on websites. If you choose to use one of our images, attribution is appreciated, but not required.

The following html code snippets can be copied and pasted to add an image of the Bunker Hill Flag to your website: