We carry historical reproductions of the Bonnie Blue Flag, which are proudly manufactured in the United States from durable and light-weight nylon and are printed with vibrant lasting colors. Our outdoor flags are finished with a canvas header and brass grommets.

The Bonnie Blue Flag can be displayed on in-ground or wall-mount flagpoles at the homes of people who are looking to pay homage to our nation's history. If you are looking for a complete wall-mount flagpole set, our Build Your Own Outdoor Historical Flag Set program will allow you to choose between premium quality 6ft. poles and brackets to display the Bonnie Blue Flag on your front porch. 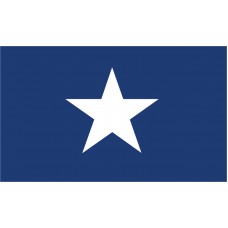 History of the Bonnie Blue Flag

The flag that we know today as the Bonnie Blue Flag features a striking design consisting of a single white five-pointed star upon a deep blue background. The first record of a flag of this design was used in 1810 as an emblem of the Republic of West Florida, though it was not called the Bonnie Blue Flag at this time. The Republic of West Florida was a coalition of English-speakers from Alabama, Mississippi, and Louisiana who sought independence from the reign of the Spanish Government and overthrew Spain's Governor de Lassus at Baton Rouge. After their victory, the new country lasted only 74 days as an independent entity, before it was annexed by the United States as part of the Louisiana Purchase. The Spanish had long-disputed with the USA over the drainage of the Mississippi basin. After the Spanish were overthrown, The Republic of West Florida was content to join the USA.

In 1836, a coalition of Texans declared independence from Mexico and created a new country called the Republic of Texas, which was a sovereign state for 9 years from 1836 to 1846. The Republic of Texas used a flag bearing the same design, which was referred to as the Burnet Flag. The name Burnet pays tribute to David G. Burnet who was a leader of Texas and served as the new Republic's first interim president in 1836. Later he served as vice president, secretary of state, and as interim president again.

The Burnet Flag was adopted by the Congress of the Republic of Texas in 1836 and was used as the official flag for three years until 1839. Later, the Republic of Texas changed their flag to the "Lone Star Flag" that we know today, which is comprised of the Burnet flag on the hoist side of the flag, with the fly side of the flag being comprised of a split design with white on the top half and red on the bottom half. The inclusion of the blue background with a single 5-pointed star on the hoist side of the flag pays tribute to the history of the state.

On January 9, 1861, when Mississippi seceded from the Union, they held a ceremony at the capitol building in Jackson, MI, where a blue flag with a single 5-pointed white star in the center was hoisted as a symbol of independence. In attendance at the ceremony, was Harry Macarthy, who later in 1861 wrote a popular song entitled, "The Bonnie Blue Flag." The name, "Bonnie Blue Flag" was first used in 1861.

The flag served as a rallying point for soldiers and citizens during the American Civil War. Texas and several other states ceded from the Union in 1861, and the Bonnie Blue Flag was one of those flown at Fort Sumter by Confederate forces.

We offer free images of the Bonnie Blue Flag in four sizes (small, medium, large, and high resolution). These images are distributed royalty free for both personal and educational use and are ideal for use in projects and on websites. If you choose to use one of our images, attribution is appreciated, but not required.

The following html code snippets can be copied and pasted to add an image of the Bonnie Blue Flag to your website: