We carry historical reproductions of the Culpeper Flag, which are proudly manufactured in the United States from durable and light-weight nylon and are printed with vibrant lasting colors. Our outdoor flags are finished with a canvas header and brass grommets. We offer the Culpeper Flag in a wide range of sizes, which is unmatched by the competition. Available sizes include: 2' x 3', 3' x 5', 4' x 6', 5' x 8', and 6' x 10'.

The Culpeper Flag can be displayed on in-ground or wall-mount flagpoles at the homes of people who are looking to pay homage to our nation's history. If you are looking for a complete wall-mount flagpole set, our Build Your Own Outdoor Historical Flag Set program will allow you to choose between premium quality 6ft. poles and brackets to display the Culpeper Flag on your front porch. 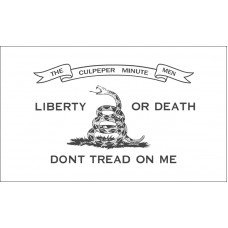 History of the Culpeper Flag

The Culpeper Flag features a white background with a simple black design. The top of the flag features a banner with the text, "The Culpeper Minute Men." Underneath that is a coiled rattle snake that looks ready to strike with his fangs and tongue showing. To the left and right of the snake is the phrase "Liberty or Death." Underneath are the words "Don't Tread on Me," in bold black letters.

The motto, "Liberty or Death" can be traced back to Patrick Henry, who famously voiced this sentiment at the 2nd Virginia Convention in March of 1775. Henry was a renowned attorney, orator, and planter from Virginia who played a major part in the state's contribution to the Revolutionary War, and famously declared, "give me liberty or give me death."

The coiled snake emblem on the Culpeper flag was also adopted by other Minutemen groups. The Rattle Snake imagery can be traced to Benjamin Franklin who published an image of a rattle snake cut in pieces (each of which represented one of the colonies) and suggested sarcastically that they should "thank" the British for sending convicted criminals to the colonies by sending rattle snakes to the British. The Timber Rattlesnake is a Venomous Viper that is most common in North America. The Rattle Snake was used as a symbol of the American spirit and of the colonies.

The phrase, "Don't Tread on Me," is a common phrase that was used in the colonies in reference to the over-encroachment of the British power during the Revolutionary War period. This message was also used on the Gadsden Flag and the First Navy Jack Flag.

The Culpeper Flag was flown by The Culpeper Minutemen, a militia group from Culpeper, VA that was formed in 1775 by the 3rd Virginia Convention to fight in the Revolutionary War against the British. The name, "Minutemen" refers to the fact that the group was prepared to mobilize and fight at a minute's notice. Culpeper, Virginia was one of the first areas of the US to organize its own militia for this purpose, however, Minutemen militias emerged throughout the original 13 colonies to contribute to the Revolutionary war effort.

The Culpeper Minutemen were first called into action in October of 1775 when British ships attempted to land in Hampton. They successfully deterred the British by firing at them until they reversed course. Their training as extremely accurate rifle marksmen meant they were able to shoot British sailors through the gaps around their cannons.

For a group of home grown and trained soldiers, to expel a colonial occupier in this way was a remarkable achievement and an incredible display of determination. For this reason, the Culpeper Flag is still flown to this day as a symbol of American determination and independence.

We offer free images of the Culpeper Flag in four sizes (small, medium, large, and high resolution). These images are distributed royalty free for both personal and educational use and are ideal for use in projects and on websites. If you choose to use one of our images, attribution is appreciated, but not required.

The following html code snippets can be copied and pasted to add an image of the Culpeper Flag to your website: