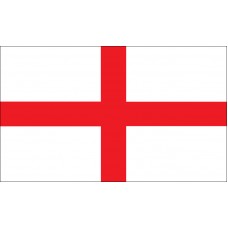 The St. George's Cross Flag, which is also the Flag of England features a white background with a red perpendicular cross covering its entire height and width. The cross motif is a reference to the crucifixion of Jesus Christ. This design is one of the most recognizable in the world and forms the basis of many other flags. Its design is thought to date back as far as the 12th Century, when it was used to identify forces and civilians in the conflicts now known as the Crusades. The word "crusade" relates to crux, which is Latin for cross.

The cross motif served as a symbol of identity during the crusades. Display of this cross indicated opposition to Muslim forces in the Holy Land, including Jerusalem. The Crusades were a series of attempts to gain control of these lands for Christian rulers. The St. George's Cross in particular, became extremely popular in Christian Europe from that time.

The man who eventually became known as Saint George is believed to have been born in the Near or Middle East in the 3rd Century. He became a Roman soldier and was a devout Christian. His family heritage was Greek and he was a member of the Praetorian Guard, a highly skilled division of the Imperial Roman army responsible for protecting Roman emperors.

The Roman Emperor, Diocletian later ordered the persecution of Christians in the Roman Empire including Saint George who was given the chance to renounce his religion but would not. This led to his execution, on April 23, 303. 23rd April is celebrated as St. George's Day in many communities across the world to this day.

Saint George is revered in many religious denominations as a hero and martyr. Due to the time of his lifespan, his origins and the development of religious beliefs, his name is held in high esteem across many cultures. He is recognized as a saint in the Roman Catholic, Eastern Orthodox, Anglican, Oriental Orthodox, Church of the East, Lutheran, and Umbanda religions and is also regarded as a prophetic figure in some Islamic texts.

The Cross of St. George was adopted by many states during and after the Crusades. It still features in the flags of Barcelona, Genoa, Milan, and many other municipalities. The country of Georgia, former part of the Soviet Union, is named after the man, and has the St. George's Cross as a central part of its national flag.

The main reason the St. George's Cross is so well known is because of its use by England, and later the United Kingdom. First adopted by Richard I of England during the 3rd Crusade, it was later established as part of the Royal Standard by Edward III in 1348.

From then, the St. George's Cross began to be associated with England. It formed the basis of the Union Jack Flag of 1707, which was a hybrid of the crosses of St. George and St. Andrew, Patron Saint of Scotland. This formed part of the Grand Union Flag of the new United States of America.

We offer free images of the St. George's Cross Flag in four sizes (small, medium, large, and high resolution). These images are distributed royalty free for both personal and educational use and are ideal for use in projects and on websites. If you choose to use one of our images, attribution is appreciated, but not required.

Add the St. George's Cross Flag to your Website:

The following html code snippets can be copied and pasted to add an image of the St. George's Cross Flag to your website: