We carry historical reproductions of the Fort Moultrie Flag, which are proudly manufactured in the United States from durable and light-weight nylon and are printed with vibrant lasting colors. Our outdoor flags are finished with a canvas header and brass grommets. We offer the Fort Moultrie Flag in a wide range of sizes, which is unmatched by the competition. Available sizes include: 2' x 3', 3' x 5', 4' x 6', 5' x 8', and 6' x 10'.

The Fort Moultrie Flag can be displayed on in-ground or wall-mount flagpoles at the homes of people who are looking to pay homage to our nation's history. If you are looking for a complete wall-mount flagpole set, our Build Your Own Outdoor Historical Flag Set program will allow you to choose between premium quality 6ft. poles and brackets to display the Fort Moultrie Flag on your front porch. 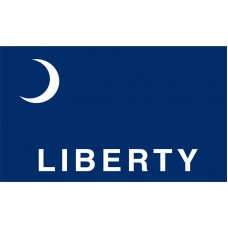 History of the Fort Moultrie Flag

The Fort Moultrie Flag, which is also known as the Liberty Flag consists of a deep blue background with bold white text across the bottom which reads liberty. In the top hoist-side corner of the flag is a white crescent-looking symbol. There is some debate over whether the symbol is designed to represent a crescent or a gorget, which is a type of throat armor used during the Revolutionary War.

Colonel Moultrie first commissioned the Liberty Flag in 1775, as an inspiration for militia personnel defending Sullivan Island from attacks by the British Royal Navy. The original flag likely did not include the word "Liberty," as there is no mention of the word in Colonel Moultrie's notes. During the revolutionary war, some soldiers carved the word, "Liberty" into their gorgets as a fashionable modification. The word Liberty may have been added to the crescent/gorget after the battle as a symbol of this and at some point, the design was likely modified again to feature the word, "Liberty" more prominently.

The Fort Moultrie flag was flown during the Revolutionary War, when the Americans successfully defended Sullivan's Island against the intrusion of the British navy in June, 1776. This involved a 10-hour siege in which British ships pounded Fort Moultrie and the surrounding land on the Island. The fort was successfully defended, mainly by South Carolinian militiamen, including Moultrie's 2nd South Carolina Regiment who were able to cause the British forces to withdraw, which preserved colonial control over Charleston. Famously, the flag was shot down during the battle, however, Sergeant William Jasper ran out into the open, risking his life to grab the flag and raise it again as a symbolic gesture to motivate his forces.

This military action saved Charleston from British re-occupation. It was crucial in the eventual American victory over the British. After many years of conflict, Charleston achieved independence in December 1782.

Fort Moultrie sits at the south-western edge of Sullivan Island, a part of the estuary system which surrounds the entrance to Charleston Harbor. It is situated directly across from Fort Sumter, the sea fort which saw the first actions of the American Civil War in 1861.

Fort Moultrie was commenced as a structure in 1776, during the American Revolutionary War. Originally built with indigenous palmetto tree fortifications, Colonel Moultrie assumed control of the fort and had it reinforced as part of preparations to repel British forces. The Carolinas were a focus of military conflict in both the Revolutionary and later Civil wars.

The Fort Moultrie Flag was adopted by the Southern Continental and Militia Army, which played a vital part in eventual American victory. It is still held dearly as a symbol of the role of South Carolina in the winning of American independence.

The current South Carolina State Flag is based off of the Moultrie Flag, except the word liberty is replaced by a white Palm tree in the center of the flag. The Fort Moultrie Flag with the word, "Liberty" in the gorget is the official flag of Moultrie County, South Carolina.

We offer free images of the Fort Moultrie Flag in four sizes (small, medium, large, and high resolution). These images are distributed royalty free for both personal and educational use and are ideal for use in projects and on websites. If you choose to use one of our images, attribution is appreciated, but not required.

The following html code snippets can be copied and pasted to add an image of the Fort Moultrie Flag to your website: