We carry historical reproductions of the First Navy Jack Flag, which are proudly manufactured in the United States from durable and light-weight nylon and are printed with vibrant lasting colors. Our outdoor flags are finished with a canvas header and brass grommets. We offer the First Navy Jack Flag in a wide range of sizes, which is unmatched by the competition. Available sizes include: 2' x 3', 3' x 5', 4' x 6', 5' x 8', and 6' x 10'.

The First Navy Jack Flag can be displayed on boats or on in-ground or wall-mount flagpoles at the homes of people who are looking to pay homage to our nation's history. If you are looking for a complete wall-mount flagpole set, our Build Your Own Outdoor Historical Flag Set program will allow you to choose between premium quality 6ft. poles and brackets to display the First Navy Jack Flag on your front porch. 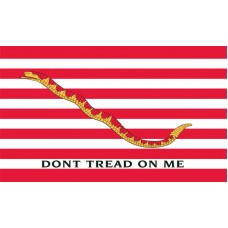 History of the First Navy Jack

The First Navy Jack features a design comprised of 13 alternating red and white stripes (7 red stripes and 6 white stripes), representing the 13 original colonies while also paying homage to the American Flag. A Unlike the national flag, however, it has no canton with 50 stars. Instead, it has a Timber Rattlesnake in a diagonal incline from bottom right to top left, towards the hoist side. Underneath the snake is the phrase "Don’t Tread on Me."

The Rattle Snake imagery can be traced to Benjamin Franklin who published an image of a rattle snake cut in pieces (each of which represented one of the colonies) and suggested sarcastically that they should "thank" the British for sending convicted criminals to the colonies by sending rattle snakes to the British. The Timber Rattlesnake is a Venomous Viper that is indigenous to North America. The Rattle Snake was used as a symbol of the American spirit and of the colonies and was used on other Revolutionary flags including the Gadsden Flag and the Culpeper Flag.

With respect to its use on the First Navy Jack, the Rattle Snake also carries additional symbolism. It is said that rattlesnakes do not strike unless provoked. The Navy also projects the belief that they are always ready to fight but prefer peace and will only attacked if provoked.

The phrase, "Don't Tread on Me," is a common phrase that was used in the colonies in reference to the over-encroachment of the British power during the Revolutionary War period. This message was also used on the Gadsden Flag and the Culpeper Flag.

Naval jack flags are flown at the front (bow) of vessels, while the national ensign is flown at the back (stern) of the vessel. It was hoisted on the jack staff, which is a relatively small pole (spar) on the very front of all commissioned vessels including submarines. Since it is retired now, the First Navy Jack is only flown on the oldest active ship in the United States Navy.

The First Navy Jack was flown from vessels of the Continental Navy in their fight against British colonial rule during the Revolutionary War. This first navy was assembled on the Delaware River under the command of Commodore Esek Hopkins.

As the navy could not fly the British Union Jack, Hopkins ordered a new design to be created. It is believed that this consisted of the 13 stripes, with the British flag as the canton. Over time, this was abandoned and the rattlesnake adopted as a clear signal of independence to the British Royal Navy.

In recent years, the the First Navy Jack has been used as a decoration to the uniforms of members of the US Army and US Navy in the form of a patch, which is usually worn on the right arm, below the American Flag.

The Jack is also popular with certain sections of US society. It is sometimes flown by citizens opposed to what they see as impositions by local, state or national governments. This includes people opposed to smoking bans in their locality. It has also become popular as a sign of defiance after terrorist attacks.

We offer free images of the First Navy Jack Flag in four sizes (small, medium, large, and high resolution). These images are distributed royalty free for both personal and educational use and are ideal for use in projects and on websites. If you choose to use one of our images, attribution is appreciated, but not required.

Add the First Navy Jack Flag to your Website:

The following html code snippets can be copied and pasted to add an image of the First Navy Jack Flag to your website: