We carry historical reproductions of the Star Spangled Banner Flag, which are proudly manufactured in the United States from durable and light-weight nylon and are printed with vibrant lasting colors. Our outdoor flags are finished with a canvas header and brass grommets. We offer the Star Spangled Banner Flag in a wide range of sizes, which is unmatched by the competition. Available sizes include: 2' x 3', 3' x 5', 4' x 6', 5' x 8', and 6' x 10'.

The Star Spangled Banner Flag can be displayed on in-ground or wall-mount flagpoles at the homes of people who are looking to pay homage to our nation's history. If you are looking for a complete wall-mount flagpole set, our Build Your Own Outdoor Historical Flag Set program will allow you to choose between premium quality 6ft. poles and brackets to display the Star Spangled Banner Flag on your front porch. 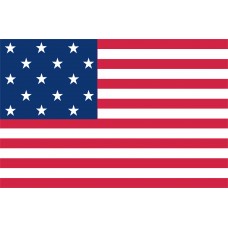 The Star Spangled Banner, otherwise known as the 15-star flag, Garrison Flag, or Fort McHenry flag features 15 alternating red and white stripes (8 red stripes and 7 white stripes) and 15 white 5-point stars in a blue canton. Like the previous 13 star version, this flag was created in many variations, since the flag code did not explicitly state the number of points on the stars, the size of the canton, and whether there should be 8 red stripes and 7 white stripes or vice-versa.

In 1795, 18 years after the Flag Resolution of June 4, 1777, two additional stars and stripes were added to the flag to reflect the addition of Kentucky and Vermont as new states. This 15-star, 15-strip flag was flown above Fort McHenry on Locust Point in Baltimore during the War of 1812. The image of the flag flying defiantly and victoriously over the battle as American ships were attacked by the British, was the inspiration for Francis Scott Key's poem, "Defence of Fort M'Henry." This poem was later set to music and the song was named the, "Star Spangled Banner," after the last line of its first verse. British composer, John Stafford Smith, later set the poem to music which became the national anthem of the United States.

In Europe, the War of 1812 is considered one of the many Napoleonic Wars which dominated that continent in the late 18th and early 19th Centuries. From a North American perspective, the War of 1812 was much more significant. Both the United States of America and Canada view the conflict as one which helped settle borders and national control.

The original Star Spangled Banner was enormous; It measured 30 feet high and 42 feet wide. It was one of two flags ordered by George Armistead, the commander of Fort McHenry, to fly over Baltimore during the conflict. The other flag was called the Storm Flag and was much smaller. The original flag is currently on display at the Smithsonian Institution National Museum of American History in a protective case.

Mary Young Pickersgill was the local Baltimore craftswoman commissioned to make the flags. Armistead had asked for a particularly large flag which could be seen across Baltimore Harbor. Each of the stars on the Garrison Flag was two feet wide and two feet high. They were arranged in five offset rows of three stars each. Mary Pickersgill created the flag with cotton and wool bunting imported from England. She was helped by her daughter and an indentured African American servant.

The flag suffered serious damage during the Battle of Baltimore. This naval and land battle was a success for the Continental forces and disrupted British plans to overtake the city. This gave Baltimore residents and military personnel vital time to secure the city. Eventually, the British abandoned their plans to retake territory in the region.

Today, the Star Spangled Banner Flag is hoisted by Americans in celebration of our heritage and as a tribute to the determination and resilience of our ancestors who sought independence from Britain.

We offer free images of the Star Spangled Banner Flag in four sizes (small, medium, large, and high resolution). These images are distributed royalty free for both personal and educational use and are ideal for use in projects and on websites. If you choose to use one of our images, attribution is appreciated, but not required.

Add the Star Spangled Banner Flag to your Website:

The following html code snippets can be copied and pasted to add an image of the Star Spangled Banner Flag to your website: