We carry historical reproductions of the Grand Union Flag, which are proudly manufactured in the United States from durable and light-weight nylon and are printed with vibrant lasting colors. Our outdoor flags are finished with a canvas header and brass grommets. We offer the Grand Union Flag in a wide range of sizes, which is unmatched by the competition. Available sizes include: 2' x 3', 3' x 5', 4' x 6', 5' x 8', and 6' x 10'.

The Grand Union Flag can be displayed on in-ground or wall-mount flagpoles at the homes of people who are looking to pay homage to our nation's history. If you are looking for a complete wall-mount flagpole set, our Build Your Own Outdoor Historical Flag Set program will allow you to choose between premium quality 6ft. poles and brackets to display the Grand Union Flag on your front porch. 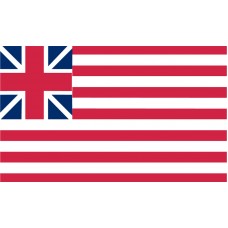 History of the Grand Union Flag

The Grand Union Flag features 13 alternating horizontal red and white stripes and a canton in the upper hoist-side corner with the British Flag from the time. This design was implemented as the first flag of the United States, with the 13 stripes representing the original 13 colonies.

Congress was also charged with creating a flag to represent the new nation known as The United Colonies who was fighting for its independence. Though individual states had their own flags, there was no national flag yet. The design chosen was the Grand Union Flag which served as a way of symbolizing American Loyalty to the British, as well as the goal of self governance. One curious point about the flag is that is virtually identical to the flag of the British East India Company which was in use since 1701; There is some debate about whether this was intentional or a mere coincidence. Though the flag is referred to as the Grand Union Flag today, at the time, it was called, "The Continental Colors."

The Grand Union Flag was first hoisted by Naval Commander John Paul Jones on his ship, the USS Alfred in Philadelphia on December 3, 1775, and was flown for the first time on land four weeks later. It is believed that George Washington raised the flag on New Year's Day 1776, at Prospect Hill in Boston, signaling a new year and a new era. The flag was flown as a clear message to the British that a new country had been born. This design served as the national flag until congress passed The Flag Act of 1777, which created the 13-star American Flag. The Grand Union Flag was flown at the signing of the Declaration of Independence at Independence Hall in Philadelphia on July 4, 1776.

It is not known precisely who created the first Grand Union Flag, however, some believe the flag was created by Margaret Manny, a Philadelphia-based hat-maker. Philadelphia was the capital city of the new nation and the location of many important politicians and political meetings. In keeping with this, many craftspeople turned their hands to making flags to meet the demands of the new country. The evidence suggests that Manny received fabric from James Wharton which was charged to the account of the USS Alfred around the same time that the first Grand Union Flag was flown on the USS Alfred.

Today, the Grand Union Flag is flown to pay homage to our nation's history and to serve as a symbol of the determination and perseverance of the Americans during the Revolutionary War.

We offer free images of the Grand Union Flag in four sizes (small, medium, large, and high resolution). These images are distributed royalty free for both personal and educational use and are ideal for use in projects and on websites. If you choose to use one of our images, attribution is appreciated, but not required.

The following html code snippets can be copied and pasted to add an image of the Grand Union Flag to your website: