We carry authentic Alabama State Flags in both indoor and outdoor varieties. Our flags are proudly made in the United States from durable nylon and are printed with vibrant long-lasting inks. The Alabama state flag is often displayed at schools, government organizations, banks, and other institutions in the state, as well as at the homes of people who take great pride in their Alabama heritage.

Our indoor flags are finished with a pole hem and your choice of with or without golden fringe. Gold Fringe is the traditional way to display an indoor flag, however, some people choose without fringe for a simple and clean look that is also less expensive. If you are looking for a complete indoor presentation set, our Build Your Own Indoor State Flag Set program allows you to select a durable nylon indoor Alabama Flag and choose between premium quality poles, bases, and ornaments, and tassel. For indoor applications, most buyers choose a 3ft. x 5ft. flag with an 8ft. pole, however, if you have a low ceiling, you may opt for a 7ft. pole, which is designed to work with drop ceilings. If you are looking for a very substantial state flag display, our 4ft. x 6ft. indoor flags can be paired with a 9ft. pole for our largest indoor display option.

Our outdoor state flags are finished with a canvas header and brass grommets and are offered in five sizes: 2ft. x 3ft., 3ft. x 5ft., 4ft. x 6ft., 5ft. x 8ft., and 6ft. x 10ft., to fit any sized flagpole. Typically, outdoor flags are flown outside of government organizations and institutions on in-ground and wall-mount flagpoles, however, some people also buy these flags to display their state pride at home. If you are looking for a wall-mount Alabama flag set to display outside of your home, our Build Your Own Outdoor State Flag Set program will allow you to choose between premium quality 6ft. poles and brackets to display the Alabama Flag on your front porch. 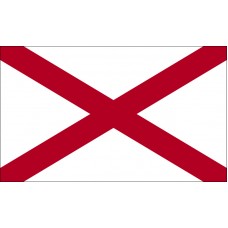 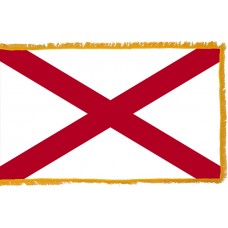 History of the Alabama Flag

The Alabama State Flag features a white background with a crimson red St. Andrew cross; this diagonal cross is also referred to as a Saltire. The red and white colors of the flag represent purity and courage, while the cross represents the sacrifice made and serves as a reminder of Alabama's confederate history.

The cross of the flag resembles the cross on the Confederate battle flag as well as the Florida State Flag as Alabama was once part of West Florida as well as Spanish Florida. The first Alabama State Flag was adopted on January 11th, 1861 after Alabama withdrew from the Union; this flag was referred to as the "Secession Convention Flag." The flag was only used for one month (until February 10th, 1861) before it was destroyed during a storm. The current design of the Alabama State Flag was adopted on February 16th, 1895.

Alabama is located in the Southeastern region of the United States of America. It shares borders with Tennessee, Georgia, Florida, Gulf of Mexico, and Mississippi. The capital of Alabama is Montgomery, while the most populated city is Birmingham (which is also home to the world's largest cast iron statue – "The Vulcan"), and the state’s oldest city is Mobile.

Alabama has several nicknames, the first of which is "The Yellowhammer State" after the state bird. Another nickname for Alabama is, "Heart of Dixie" which was a coined in the 1940s-1950s to pay homage to the states central location within the Deep South of the United States. Finally, Alabama is also nicknamed, "The Cotton State" as the production of cotton played an important role in the state’s history.

The state of Alabama was named after the Alabama River which was named after the Native American Tribe called Alabama. The territory was created by the United States Congress on March 3rd, 1817 and it was admitted as the 22nd State in the Union on December 14th, 1819.

The first inhabitants of Alabama were various Native Americans including Cherokee, Alabama, Creek, Chicksaw, Choctaw, and Koasati. The first Europeans to reached Alabama in the 16th century when the Spanish explorer Hernando de Soto traveled through the state in 1540. The first Europeans to establish a settlement were the French in the city of Mobile in 1702. The area was claimed by the French and became part of Louisiana from 1702-1763. As a result of France's defeat during the seven year war with Britain, Alabama became part of West Florida from 1763-1783 until Spain gained control following the American Revolutionary War. Spain remained in control of the area until the Spanish Garrison at Mobile surrendered to the United States of America's forces.

We offer free images of the Alabama Flag in four sizes (small, medium, large, and high resolution). These images are distributed royalty free for both personal and educational use and are ideal for use in projects and on websites. If you choose to use one of our images, attribution is appreciated, but not required.

The following html code snippets can be copied and pasted to add an image of the Alabama State Flag to your website: