We carry authentic Maryland State Flags in both indoor and outdoor varieties. Our flags are proudly made in the United States from durable nylon and are printed with vibrant long-lasting inks. The Maryland state flag is often displayed at schools, government organizations, banks, and other institutions in the state, as well as at the homes of people who take great pride in their Maryland heritage.

Our indoor flags are finished with a pole hem and your choice of with or without golden fringe. Gold Fringe is the traditional way to display an indoor flag, however, some people choose without fringe for a simple and clean look that is also less expensive. If you are looking for a complete indoor presentation set, our Build Your Own Indoor State Flag Set program allows you to select a durable nylon indoor Maryland Flag and choose between premium quality poles, bases, and ornaments, and tassel. For indoor applications, most buyers choose a 3ft. x 5ft. flag with an 8ft. pole, however, if you have a low ceiling, you may opt for a 7ft. pole, which is designed to work with drop ceilings. If you are looking for a very substantial state flag display, our 4ft. x 6ft. indoor flags can be paired with a 9ft. pole for our largest indoor display option.

Our outdoor state flags are finished with a canvas header and brass grommets and are offered in five sizes: 2ft. x 3ft., 3ft. x 5ft., 4ft. x 6ft., 5ft. x 8ft., and 6ft. x 10ft., to fit any sized flagpole. Typically, outdoor flags are flown outside of government organizations and institutions on in-ground and wall-mount flagpoles, however, some people also buy these flags to display their state pride at home. If you are looking for a wall-mount Maryland flag set to display outside of your home, our Build Your Own Outdoor State Flag Set program will allow you to choose between premium quality 6ft. poles and brackets to display the Maryland Flag on your front porch. 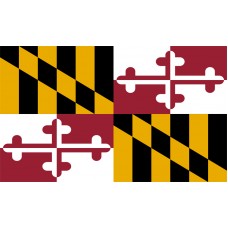 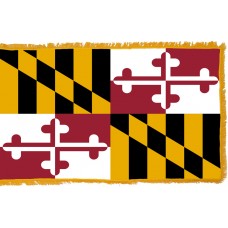 History of the Maryland Flag

The Maryland State Flag is divided into a grid of four equal parts with two rows and two columns. The flag pays tribute to the founder of Maryland, George Calvert, 1st Baron Baltimore. The top left and bottom right quadrant of the flag feature a black and yellow design that is derived from the coat of arms from the Calvert family; this design is comprised of eight sections of and eight sections of black which are formed on a right diagonal angle. The top right and bottom left quadrants of the flag features a red and white botonee cross design which is that of Carverts mother's side of the family, the Crossland Family. The Crossland family design is also a quadrant design comprised of white in the top left and bottom right and red in the top right and bottom left. In the center of the design is a botonee cross which cuts through the four quadrants and is white on the red portions and red on the white portions. The Maryland State Flag was adopted on March 9th, 1904 and is distinctive as being the only state flag in the United States of America that is based on English heraldry and also one of only four US state flags that does not include the color blue.

Maryland located in the Mid Atlantic Region of the United States of America and shares borders with Pennsylvania, the Chesapeake Bay, Virginia, Delaware, West Virginia, and the Atlantic Ocean. Maryland was named after Henrietta Maria of France who was the Queen consort of England. The capital city is Annapolis and the largest city is Baltimore. Due to its wide and diverse range of land including marshlands, mountains, forests, beaches etc, it is known as "America in Miniature." Maryland is also referred to as, "The Old Line State," which was a nickname coined by General George Washington that pays homage to the location of the state as a dividing line between the north and south during the civil war. Another nickname for the state is, "The Free State" which represents the loose enforcement and outright defiance of alcohol restrictions during the alcohol prohibition era of 1920-1933 by the leaders of Maryland .

The first Inhabitants of Maryland subsided by hunting animals like deer and rabbits and eventually evolved to cultivate agriculture as a means of subsistence. The first European to explore the area was Italian, John Cabot in 1498, however, the first settlements were not established until 1634, following the arrival of the British. In 1632, King Charles I of England gave George Calvert the "royal charter" for the colony of Maryland. George Calvert's son Cecil inherited the land following Calvert's death and his brother Leonard led settlers to Maryland and established St. Mary's, which became capital of Maryland. In 1776, Maryland joined with other colonies of the United States of America in declaring independence from Britain. Maryland officially became the 7th state of the United States of America on April 28th, 1788.

Maryland has many important historic and religious buildings, yet, the most popular tourist attraction in Maryland is the National Aquarium that was built on August 8th, 1981 and attracts approximately 1.5 million visitors a year to learn about the more than 750 species of fish and 17,000 specimens that are featured on the site.

We offer free images of the Maryland Flag in four sizes (small, medium, large, and high resolution). These images are distributed royalty free for both personal and educational use and are ideal for use in projects and on websites. If you choose to use one of our images, attribution is appreciated, but not required.

The following html code snippets can be copied and pasted to add an image of the Maryland State Flag to your website: