We carry authentic Iowa State Flags in both indoor and outdoor varieties. Our flags are proudly made in the United States from durable nylon and are printed with vibrant long-lasting inks. The Iowa state flag is often displayed at schools, government organizations, banks, and other institutions in the state, as well as at the homes of people who take great pride in their Iowa heritage.

Our indoor flags are finished with a pole hem and your choice of with or without golden fringe. Gold Fringe is the traditional way to display an indoor flag, however, some people choose without fringe for a simple and clean look that is also less expensive. If you are looking for a complete indoor presentation set, our Build Your Own Indoor State Flag Set program allows you to select a durable nylon indoor Iowa Flag and choose between premium quality poles, bases, and ornaments, and tassel. For indoor applications, most buyers choose a 3ft. x 5ft. flag with an 8ft. pole, however, if you have a low ceiling, you may opt for a 7ft. pole, which is designed to work with drop ceilings. If you are looking for a very substantial state flag display, our 4ft. x 6ft. indoor flags can be paired with a 9ft. pole for our largest indoor display option.

Our outdoor state flags are finished with a canvas header and brass grommets and are offered in five sizes: 2ft. x 3ft., 3ft. x 5ft., 4ft. x 6ft., 5ft. x 8ft., and 6ft. x 10ft., to fit any sized flagpole. Typically, outdoor flags are flown outside of government organizations and institutions on in-ground and wall-mount flagpoles, however, some people also buy these flags to display their state pride at home. If you are looking for a wall-mount Iowa flag set to display outside of your home, our Build Your Own Outdoor State Flag Set program will allow you to choose between premium quality 6ft. poles and brackets to display the Iowa Flag on your front porch. 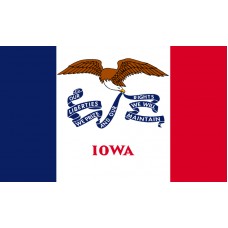 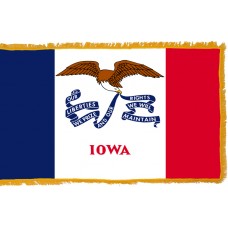 History of the Iowa Flag

The Iowa State Flag features a tricolor design of three vertical sections. The left portion is blue, the center portion is white, and the right portion is red. The central white section is twice the width of the other two bands. The central white portion features a soaring eagle with his wings spread. In his mouth, the eagle is holding a blue banner with white text reading, " Our Liberties we Prize and Our Right We Will Maintain," the Iowa state motto. Below the eagle, the word "Iowa" is emblazoned in red letters.

The blue, white, and red tri-color design pays homage to Iowa's history as part of French Louisiana. In the context of the Iowa flag, the blue color also stands for loyalty, justice, and truth, the white color represents purity, and the red color represents courage and bravery. The bald eagle is a national symbol of the United States of America as well as representing strength. The word "Iowa" written in red represents the courage shown and sacrifice given by the men that fought to protect Iowa and the United States. The design of the Iowa State Flag was created by Mrs. Dixie Cornell Gerbhardt, a member of the Daughters of the American Revolution. The flag was adopted on March 12th, 1921 which was 75 years after Iowa officially became a State.

Iowa is a Midwestern State in the United States of America. It shares borders with Wisconsin, Illinois, Missouri, Nebraska, South Dakota, and Minnesota. The most populated and capital city is Des Moines, which was named after the Des Moines River in Iowa. The name, Des Moines is derived from the French Colonial phrase, "Riviere des Moines," which translates as "River of the Monks." Iowa is referred to as "The Hawkeye State" to honor "Chief Black Hawk" who was a Native American Leader and Warrior.

Iowa was first inhabited approximately 13,000 years ago by Native Americans who were originally hunters and gatherers, but over over time developed into established farming communities. The first Europeans known to arrive to the area were the French explorers Jacques Marquette and Louis Jolliet in 1673. In 1682, French explorer Robert De La Salle claimed the area for France as part of Louisiana until 1763. The first permanent settlement in the area was, "Dubuque" which was established in 1788. During this period, the French transferred some ownership to the Spanish and the British who both established posts along the Mississippi River and the Des Moines River. In 1803, following the Louisiana Purchase (the United States of America bought the Louisiana territory for 15 million Dollars), Iowa became part of the United States of America. In 1812 Iowa became part of the Missouri territory and in 1838, the territory of Iowa was established. Iowa became the 29th official state in the United States on December 28th, 1846.

We offer free images of the Iowa Flag in four sizes (small, medium, large, and high resolution). These images are distributed royalty free for both personal and educational use and are ideal for use in projects and on websites. If you choose to use one of our images, attribution is appreciated, but not required.

The following html code snippets can be copied and pasted to add an image of the Iowa State Flag to your website: