We carry authentic Idaho State Flags in both indoor and outdoor varieties. Our flags are proudly made in the United States from durable nylon and are printed with vibrant long-lasting inks. The Idaho state flag is often displayed at schools, government organizations, banks, and other institutions in the state, as well as at the homes of people who take great pride in their Idaho heritage.

Our indoor flags are finished with a pole hem and your choice of with or without golden fringe. Gold Fringe is the traditional way to display an indoor flag, however, some people choose without fringe for a simple and clean look that is also less expensive. If you are looking for a complete indoor presentation set, our Build Your Own Indoor State Flag Set program allows you to select a durable nylon indoor Idaho Flag and choose between premium quality poles, bases, and ornaments, and tassel. For indoor applications, most buyers choose a 3ft. x 5ft. flag with an 8ft. pole, however, if you have a low ceiling, you may opt for a 7ft. pole, which is designed to work with drop ceilings. If you are looking for a very substantial state flag display, our 4ft. x 6ft. indoor flags can be paired with a 9ft. pole for our largest indoor display option.

Our outdoor state flags are finished with a canvas header and brass grommets and are offered in five sizes: 2ft. x 3ft., 3ft. x 5ft., 4ft. x 6ft., 5ft. x 8ft., and 6ft. x 10ft., to fit any sized flagpole. Typically, outdoor flags are flown outside of government organizations and institutions on in-ground and wall-mount flagpoles, however, some people also buy these flags to display their state pride at home. If you are looking for a wall-mount Idaho flag set to display outside of your home, our Build Your Own Outdoor State Flag Set program will allow you to choose between premium quality 6ft. poles and brackets to display the Idaho Flag on your front porch. 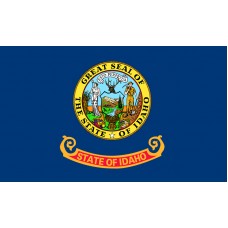 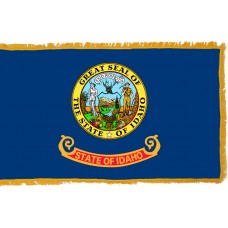 History of the Idaho Flag

The Idaho State Flag features a dark blue background with a simplified version of the Idaho State Seal emblazoned upon the center. Underneath the seal, is a red and gold banner with bold gold text reading, "State of Idaho." The seal features a woman on the left-hand side, with a male figure on the right hand side. The woman is holding scales which represent the "scales of justice" and a spear with a "liberty" cap, while the male figure is a miner who is holding holding a shovel and a pickaxe with pieces of ore around his feet. The miner is dressed in the typical grey-brown attire of a miner at the time.  The seal was designed by Emma Edwards Green in 1890 who is the only female to design a US State seal. The design reflects the state of Idaho at the time, where the predominant industry was mining, as well as Green's predictions about Idaho's future based on her interviews with prominent politicians who predicted that women would have the right to vote in the future. Green positioned the woman next to the man to represent female equality with men. A shield separates the two figures uniting to protect the state. The large tree in the shield signifies the trees that grow in Idaho, while the man plowing in the shield as well as the sheaf of grain and cornucopias below the shield reference Idaho's agriculture. An elk head is featured above the shield signifying the importance of elks and moose which were protected species in the state. The phrase, "Esto Perpetua" appears in a banner above the elk head and translates to, "May It Endure" which represents the states hope of lasting for a long time. The Idaho State Flag was adopted on November 2nd, 1957.

Idaho is a state in the Northwestern region of the United States and shares borders with Montana, Wyoming, Nevada, Utah, Washington, and Oregon. It also shares some Canadian border with British Columbia. Boise, located in southwestern Idaho is the Capital and most populous city in the state. Idaho is referred to as "The Gem State" due to its rich resources.

Idaho has been inhabited for approximately 14,000 years with the first residents being Native American Tribes which included Nez Perce, Coeur d'Alene, and Shoshone. Idaho was one of the last states that was explored by Europeans and the first Europeans that arrived to the area were the British explorers Lewis and Clark, who arrived on August 12th, 1805, on their way to the Pacific Ocean. Shortly after their visit, fur traders began to arrive to the area as well as other traders, farmers and miners. The first establishment was, "Franklin," which was established in 1860 by the Mormons. In 1846, the Oregon Treaty between the United States and Britain made Idaho a part of the United States. In 1848, Idaho joined the Oregon Territory until 1853, when Idaho was incorporated into the Washington Territory. In 1863, Idaho became its own territory and on July 3rd, 1890, Idaho officially became the 43rd US state.

We offer free images of the Idaho Flag in four sizes (small, medium, large, and high resolution). These images are distributed royalty free for both personal and educational use and are ideal for use in projects and on websites. If you choose to use one of our images, attribution is appreciated, but not required.

The following html code snippets can be copied and pasted to add an image of the Idaho State Flag to your website: