We carry authentic Georgia State Flags in both indoor and outdoor varieties. Our flags are proudly made in the United States from durable nylon and are printed with vibrant long-lasting inks. The Georgia state flag is often displayed at schools, government organizations, banks, and other institutions in the state, as well as at the homes of people who take great pride in their Georgia heritage.

Our indoor flags are finished with a pole hem and your choice of with or without golden fringe. Gold Fringe is the traditional way to display an indoor flag, however, some people choose without fringe for a simple and clean look that is also less expensive. If you are looking for a complete indoor presentation set, our Build Your Own Indoor State Flag Set program allows you to select a durable nylon indoor Georgia Flag and choose between premium quality poles, bases, and ornaments, and tassel. For indoor applications, most buyers choose a 3ft. x 5ft. flag with an 8ft. pole, however, if you have a low ceiling, you may opt for a 7ft. pole, which is designed to work with drop ceilings. If you are looking for a very substantial state flag display, our 4ft. x 6ft. indoor flags can be paired with a 9ft. pole for our largest indoor display option.

Our outdoor state flags are finished with a canvas header and brass grommets and are offered in five sizes: 2ft. x 3ft., 3ft. x 5ft., 4ft. x 6ft., 5ft. x 8ft., and 6ft. x 10ft., to fit any sized flagpole. Typically, outdoor flags are flown outside of government organizations and institutions on in-ground and wall-mount flagpoles, however, some people also buy these flags to display their state pride at home. If you are looking for a wall-mount Georgia flag set to display outside of your home, our Build Your Own Outdoor State Flag Set program will allow you to choose between premium quality 6ft. poles and brackets to display the Georgia Flag on your front porch. 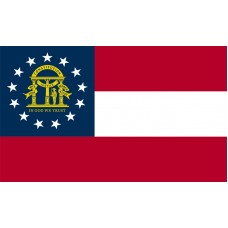 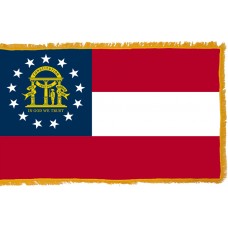 History of the Georgia Flag

The Georgia State Flag features three alternating red and white horizontal stripes of equal width (red, white, red). A dark blue canton in the top hoist-side corner contains the Georgia State Coat of arms in gold, which is encircled by thirteen white five-point stars. Beneath the coat of arms in gold capitalized text reads, "In God We Trust." The thirteen stars signify George and the other 12 original states which formed the original 13 colonies.

The Coat of Arms is comprised of an arch with three columns. The arch bears the word, "Constitution" and signifies the states constitution, while the columns represent each of the three branches of the state's government (legislative, executive, and judicial). On each column, the words of the state motto are emblazoned (wisdom, justice, and moderation). A Revolutionary was soldier is positioned between the second and third column, paying homage to the states' military history. The current flag of George is very similar to the The First Confederate Flag (Stars and Bars), except the flag features 13 stars instead of 7 and the flag features the George States Seal in the center of the ring of stars, whereas there was no seal on The First Confederate Flag. The current design of the George State Flag was adopted by the Georgia General Assembly on May 8th, 2003.

From 1956 until 2001, the George State Flag featured the George State Seal on the left third of the flag upon a blue background. The right two thirds of the flag was comprised of the confederate flag. This flag was designed in the 1950s against the backdrop of the civil rights movement and the associated racist backlash in the United States at that time. The Supreme Court Decision of Brown vs. Board of Education was issued on May 17, 1954, which determined that racial segregation in public schools was unconstitutional. In Georgia, there was a strong sentiment in favor of preserving segregation and an array of laws were passed to prevent the implementation of the supreme court decision including laws aimed at segregation in public places such as parks and swimming pools. It was in this environment that John Sammons Bell, chairman of the State Democratic Party and a well known outspoken supporter of segregation designed the 1956 state flag. The Georgia state legislators who supported segregation also supported changing the state's flag to include the Confederate Battle Flag. Public pressure mounted in 1992 and Governor Zell Miller submitted a proposal to change the flag, however, the Georgia Legislature denied the legislation. In 2001, the next Governor, Roy Barnes, tried again to replace the flag. Barnes successfully implemented a new flag which was a compromise, featuring a blue background with the state seal and small versions of all of the previous Georgia Flags in a banner with the words, "Georgia's History." The new flag was widely panned as unattractive and poorly designed.

In 2002, the next Governer of Georgia, Sonny Perdue was elected on a platform that the voters in Georgia would elect a new flag based upon a vote. Perdue followed through on his campaign promise and requested the State Legislature to design a new flag. This design was put up to a vote by the people of Georgia, where they were asked to choose between the current (2001) flag and the new (2003) flag. The new (2003) design won overwhelmingly and has been the official state flag of George since 2003.

Georgia is a Southeastern State in the United States of America that shares borders with Florida, Tennessee, South Carolina, North Carolina, Alabama, Florida, and the Atlantic Ocean. Georgia is home to 500 cities. Its capital city and most populated city is Atlanta. Before Atlanta became the state's capital, four other cities served as the state capital (Savannah, Augusta, Louisville, and Milledgeville). Georgia is referred to as "The Peach State" because its reputation for producing high-quality peaches.

The first inhabitants of Georgia were "Mound Builders" who were named for the earth mounds they built for religious reasons or burial grounds over a 5,000 year period. The area became a British Colony on February 12th, 1733 after James Oglethorpe (British member of parliament) discovered the area in 1732. The name, Georgia was chosen after Britain's King George II. In 1742, the colony was invaded by the Spanish, however, control of the territory was returned to the British in 1752 after the Spanish failed to support the colony. Georgia was one of the thirteen original colonies who took part in the Revolutionary War. Georgia became an official state of the United States of America on January 2nd, 1788.

We offer free images of the Georgia Flag in four sizes (small, medium, large, and high resolution). These images are distributed royalty free for both personal and educational use and are ideal for use in projects and on websites. If you choose to use one of our images, attribution is appreciated, but not required.

The following html code snippets can be copied and pasted to add an image of the Georgia State Flag to your website: