We carry authentic New Jersey State Flags in both indoor and outdoor varieties. Our flags are proudly made in the United States from durable nylon and are printed with vibrant long-lasting inks. The New Jersey state flag is often displayed at schools, government organizations, banks, and other institutions in the state, as well as at the homes of people who take great pride in their New Jersey heritage.

Our indoor flags are finished with a pole hem and your choice of with or without golden fringe. Gold Fringe is the traditional way to display an indoor flag, however, some people choose without fringe for a simple and clean look that is also less expensive. If you are looking for a complete indoor presentation set, our Build Your Own Indoor State Flag Set program allows you to select a durable nylon indoor New Jersey Flag and choose between premium quality poles, bases, and ornaments, and tassel. For indoor applications, most buyers choose a 3ft. x 5ft. flag with an 8ft. pole, however, if you have a low ceiling, you may opt for a 7ft. pole, which is designed to work with drop ceilings. If you are looking for a very substantial state flag display, our 4ft. x 6ft. indoor flags can be paired with a 9ft. pole for our largest indoor display option.

Our outdoor state flags are finished with a canvas header and brass grommets and are offered in five sizes: 2ft. x 3ft., 3ft. x 5ft., 4ft. x 6ft., 5ft. x 8ft., and 6ft. x 10ft., to fit any sized flagpole. Typically, outdoor flags are flown outside of government organizations and institutions on in-ground and wall-mount flagpoles, however, some people also buy these flags to display their state pride at home. If you are looking for a wall-mount New Jersey flag set to display outside of your home, our Build Your Own Outdoor State Flag Set program will allow you to choose between premium quality 6ft. poles and brackets to display the New Jersey Flag on your front porch. 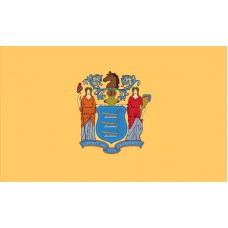 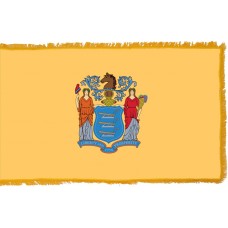 History of the New Jersey Flag

The New Jersey State Flag is features a pale yellow ("buff") background with the state's coat of arms placed prominently in the center. The coat of arms is comprised of a light blue shield with three plows in the center, paying homage to the state's agricultural industry. Underneath the shield is a blue banner with silver text that reads, "Liberty and Prosperity," which is the states motto and, "1776," which is the year New Jersey became a state. Two women stand supporting the shield, one on the right side, and one on the left side. The woman on the left is holding a staff with a liberty cap and is designed to represent liberty, while the woman on the right is holding a cornucopia filled with produce and is designed to represent Ceres, the goddess of agriculture, fertility, and motherly relationships. The two women are symbolic representations of the states motto, "Liberty and Prosperity." A forward facing helmet and a horses head are positioned above the shield. The helmet represents sovereignty, while the horse's head stands for speed and strength. The horse is also the state animal of New Jersey. The New Jersey State Flag is the only state flag that with a "buff" colored background. The buff and dark blue colors used on the New Jersey flag pay homage to the the colors of the uniforms worn by New Jersey's Army regiments during the Revolutionary War, which were chosen by George Washington. The New Jersey Flag was originally designed by Pierre Eugene du Simitiere in 1777, however there were slight modifications made to the design in 1896 and the current version of the flag was adopted on March 26th, 1896.

New Jersey is located in the Mid-Atlantic region of the United States of America and shares borders with New York, the Atlantic Ocean, the Delaware River, Pennsylvania, and the Delaware Bay. The capital city is Trenton and the largest city in the state is Newark. New Jersey is also known as "The Garden State," a nickname coined by Abraham Browning of Camden, NJ.

The first residents were Native Americans known as the Lenni-Lenape (also known as Delaware Indians or Delaware Nation). The first European to explore the area was Italian explorer Giovanni da Verrazzano in 1524. In 1609, the Dutch explorer Henry Hudson claimed the land for the Dutch and it was referred to as the New Netherlands. The Dutch and the Swedish settlers moved here and eventually the English began to settle the area, resulting in a population comprised of more English than Dutch. In 1664, the English Navy grasped control of the area. The Duke of York gifted the area now known as New Jersey to long-time friends and supporters, Lord John Berkeley and Sir George Carteret, who intended to use the land as a business opportunity whereby they would recruit settlers from England whom they would lease land.

During this period, the land was divided into two sections – East Jersey and West Jersey. West Jersey was occupied by Quakers and East Germany was occupied by Puritans until the two sections were united in 1702. In 1776 during the 1Revolutionary War, New Jersey served as a battling ground as it was between New York and Philadelphia. Following the Revolutionary War, New Jersey officially became the third state on December 18th, 1787.

We offer free images of the New Jersey Flag in four sizes (small, medium, large, and high resolution). These images are distributed royalty free for both personal and educational use and are ideal for use in projects and on websites. If you choose to use one of our images, attribution is appreciated, but not required.

The following html code snippets can be copied and pasted to add an image of the New Jersey State Flag to your website: