We carry authentic New Hampshire State Flags in both indoor and outdoor varieties. Our flags are proudly made in the United States from durable nylon and are printed with vibrant long-lasting inks. The New Hampshire state flag is often displayed at schools, government organizations, banks, and other institutions in the state, as well as at the homes of people who take great pride in their New Hampshire heritage.

Our indoor flags are finished with a pole hem and your choice of with or without golden fringe. Gold Fringe is the traditional way to display an indoor flag, however, some people choose without fringe for a simple and clean look that is also less expensive. If you are looking for a complete indoor presentation set, our Build Your Own Indoor State Flag Set program allows you to select a durable nylon indoor New Hampshire Flag and choose between premium quality poles, bases, and ornaments, and tassel. For indoor applications, most buyers choose a 3ft. x 5ft. flag with an 8ft. pole, however, if you have a low ceiling, you may opt for a 7ft. pole, which is designed to work with drop ceilings. If you are looking for a very substantial state flag display, our 4ft. x 6ft. indoor flags can be paired with a 9ft. pole for our largest indoor display option.

Our outdoor state flags are finished with a canvas header and brass grommets and are offered in five sizes: 2ft. x 3ft., 3ft. x 5ft., 4ft. x 6ft., 5ft. x 8ft., and 6ft. x 10ft., to fit any sized flagpole. Typically, outdoor flags are flown outside of government organizations and institutions on in-ground and wall-mount flagpoles, however, some people also buy these flags to display their state pride at home. If you are looking for a wall-mount New Hampshire flag set to display outside of your home, our Build Your Own Outdoor State Flag Set program will allow you to choose between premium quality 6ft. poles and brackets to display the New Hampshire Flag on your front porch. 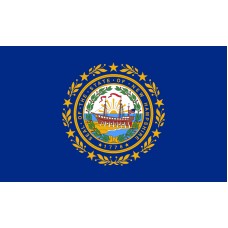 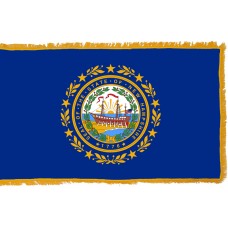 History of the New Hampshire Flag

The New Hampshire State Flag features a blue background with the state seal emblazoned upon the center. The seal features a central circular scene depicting a large warship flying a US flag, docked on a yellow landmass surrounded by water with the sun rising in the background. The ship is representative of the USS Raleigh, which was one of the thirteen warships that was sponsored by the continental congress and built in 1776. Its inclusion on the flag is symbolic of the history of New Hampshire as well as its famous ship-building industry. The water represents the harbor of Portsmouth and the yellow granite land represents the landscape of New Hampshire as well as the unshakable character of the people. Surrounding this scene is bold yellow text running around the outside of this circle which reads, "Seal of the State of New Hampshire * 1776." Surrounding that text is a circle with a double yellow line border, which is surrounded again by 9 stars which are interwoven in a wreath of laurels. The choice of nine stars represent New Hampshire as the 9th state to gain statehood in the United States of America. The New Hampshire State Flag was adopted on November 30th, 1931.

New Hampshire is located in the New England region of the United States of America and shares borders with Massachusetts, Vermont, Maine, the Atlantic Ocean, and the Canadian area of Quebec. New Hampshire is the 5th smallest state by land mass. The capital city is Concord and the largest city is Manchester. New Hampshire is also referred to as "The Granite State" due to its granite formations and quarries; Granite is also the official state rock of New Hampshire. The beautiful, scenic mountain ranges of New Hampshire have also earned the state the nicknames, "The White Mountain State" and "The Switzerland of America" in reference to the beautiful White mountains that cover the northern part of the state.

Some of the earliest residents of New Hampshire were the Abenaki tribes and the Penacook. English explorer, Martin Pring was the first European to discover the area in 1603. He was followed shortly after by British explorer Captain John Smith and French explorer Samuel de Champlain who also visited and explored the area. Following Martin Pring's arrival, England claimed the area and soon began to colonize it and establish settlements.

The first settlement, established in 1623, was a fishing outpost close to the city now known as Rye. Soon after, a permanent settlement called Hilton's Point was established, which was located in what is now called, Dover. In 1679, New Hampshire was elevated to being a province of England, however, it was still governed by the leadership of Massachusetts. In 1741, New Hampshire was reclassified as a separate colony. Following the French and Indian War in 1763, New Hampshire was one of the first states to revolt against perceived unfair taxation by the British and it was the first of the original 13 English colonies that declared its independence from Great Britain. On June 21st, 1788, after the colonies where victorious in the Revolutionary War, New Hampshire became one of the original states in the United States of America.

We offer free images of the New Hampshire Flag in four sizes (small, medium, large, and high resolution). These images are distributed royalty free for both personal and educational use and are ideal for use in projects and on websites. If you choose to use one of our images, attribution is appreciated, but not required.

The following html code snippets can be copied and pasted to add an image of the New Hampshire State Flag to your website: