We carry authentic Montana State Flags in both indoor and outdoor varieties. Our flags are proudly made in the United States from durable nylon and are printed with vibrant long-lasting inks. The Montana state flag is often displayed at schools, government organizations, banks, and other institutions in the state, as well as at the homes of people who take great pride in their Montana heritage.

Our indoor flags are finished with a pole hem and your choice of with or without golden fringe. Gold Fringe is the traditional way to display an indoor flag, however, some people choose without fringe for a simple and clean look that is also less expensive. If you are looking for a complete indoor presentation set, our Build Your Own Indoor State Flag Set program allows you to select a durable nylon indoor Montana Flag and choose between premium quality poles, bases, and ornaments, and tassel. For indoor applications, most buyers choose a 3ft. x 5ft. flag with an 8ft. pole, however, if you have a low ceiling, you may opt for a 7ft. pole, which is designed to work with drop ceilings. If you are looking for a very substantial state flag display, our 4ft. x 6ft. indoor flags can be paired with a 9ft. pole for our largest indoor display option.

Our outdoor state flags are finished with a canvas header and brass grommets and are offered in five sizes: 2ft. x 3ft., 3ft. x 5ft., 4ft. x 6ft., 5ft. x 8ft., and 6ft. x 10ft., to fit any sized flagpole. Typically, outdoor flags are flown outside of government organizations and institutions on in-ground and wall-mount flagpoles, however, some people also buy these flags to display their state pride at home. If you are looking for a wall-mount Montana flag set to display outside of your home, our Build Your Own Outdoor State Flag Set program will allow you to choose between premium quality 6ft. poles and brackets to display the Montana Flag on your front porch. 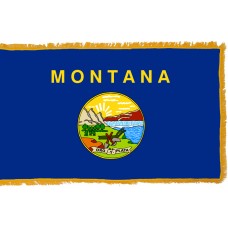 History of the Montana Flag

The Montana State Flag features a blue background with the Seal of Montana emblazoned upon the center. Above the Seal, the word, "Montana" is emblazoned in golden text in the font, Helvetica. The seal is a circular formation which features a scenic view containing the sun rising over a river with a waterfall, next to mountains and green fields. On the green fields is a miners pick and a shovel next to several trees. The shovel and pick represent the importance of the agriculture in Montana. The river and water falls represent the great falls of the Missouri River, while the mountains, fields, and trees represent the natural features of the state. The state motto, "Oro Y Plata," which translates to "Gold and Silver" is written in a banner across the bottom of the seal. The motto references the mountains in Montana, where gold and silver was discovered in the mid 1800's. The Montana State Flag was adopted on July 1st, 1981.

Montana is one of the nine mountainous states in the Northwestern region of the United States of America,and shares borders with four States: Wyoming, Idaho, North Dakota, and South Dakota. It is also the only state that shares borders with three Canadian provinces (British Columbia, Alberta, and Saskatchewan). Montana is the 4th largest state by land mass and is the largest landlocked state in the country. The capital city of Montana is Helena and the largest city is Billings. Montana's name is derived from the Spanish word for "mountain." Montana is referred to as "The Treasure State" due to the gold, silver, and rich mineral reserves which have been discovered in the state's mountains. It is also known as "Richest hill on planet earth' due to its mining history.

The first people that inhabited Montana were known as the Paleo-Indians. Montana was then inhabited with Native American tribes that included Blackfeet, Shoshone, Crow, Cheyenne, Kootenai, and Salish. During the 1700s, European fur traders arrived in the area and trading posts were established. The land was claimed by both the French and the Spanish. In 1803, Montana became a territory of the United States of America following the Louisiana purchase. In 1804, American explorers Lewis and Clark traveled to the area and reported of the beautiful land that they had found and the abundance of fur. This caused an insurance of trappers and missionaries moving to Montana, and by 1846, Fort Benton was established as a furn trading post by the American Fur Trading Company. In 1858, gold was discovered in Montana, and, as a result, more people began to move to the area seeking fortunes. As more settlers arrived in Montana, the Native American tribes began losing their land and in the 1870s, they began to oppose and fight back. In 1876, this frustration erupted in the "Battle of Little Big Horn" which was the conflict between the United States of America army and the Indian tribes. The battle occurred on June 25-26, 1876. The Native Americans military efforts were led by several famous chiefs including Sitting Bull, Crazy Horse, Chief Gall, Lame White Man, and Two Moon, among others. The United States Army was led by George Custer who led 650 soldiers. George Custer was prepared for a battle with hundreds of tribe members. Instead, he was caught off guard when he arrived to a battle against thousands of them. George Custer and his men were all killed, and the battle is also known as "Custer's Last Stand." Montana became the official 41st state of the United States of America on November 8th, 1889.

We offer free images of the Montana Flag in four sizes (small, medium, large, and high resolution). These images are distributed royalty free for both personal and educational use and are ideal for use in projects and on websites. If you choose to use one of our images, attribution is appreciated, but not required.

The following html code snippets can be copied and pasted to add an image of the Montana State Flag to your website: