We carry authentic Louisiana State Flags in both indoor and outdoor varieties. Our flags are proudly made in the United States from durable nylon and are printed with vibrant long-lasting inks. The Louisiana state flag is often displayed at schools, government organizations, banks, and other institutions in the state, as well as at the homes of people who take great pride in their Louisiana heritage.

Our indoor flags are finished with a pole hem and your choice of with or without golden fringe. Gold Fringe is the traditional way to display an indoor flag, however, some people choose without fringe for a simple and clean look that is also less expensive. If you are looking for a complete indoor presentation set, our Build Your Own Indoor State Flag Set program allows you to select a durable nylon indoor Louisiana Flag and choose between premium quality poles, bases, and ornaments, and tassel. For indoor applications, most buyers choose a 3ft. x 5ft. flag with an 8ft. pole, however, if you have a low ceiling, you may opt for a 7ft. pole, which is designed to work with drop ceilings. If you are looking for a very substantial state flag display, our 4ft. x 6ft. indoor flags can be paired with a 9ft. pole for our largest indoor display option.

Our outdoor state flags are finished with a canvas header and brass grommets and are offered in five sizes: 2ft. x 3ft., 3ft. x 5ft., 4ft. x 6ft., 5ft. x 8ft., and 6ft. x 10ft., to fit any sized flagpole. Typically, outdoor flags are flown outside of government organizations and institutions on in-ground and wall-mount flagpoles, however, some people also buy these flags to display their state pride at home. If you are looking for a wall-mount Louisiana flag set to display outside of your home, our Build Your Own Outdoor State Flag Set program will allow you to choose between premium quality 6ft. poles and brackets to display the Louisiana Flag on your front porch. 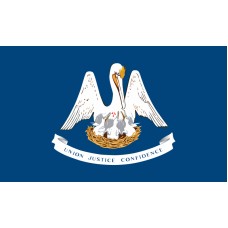 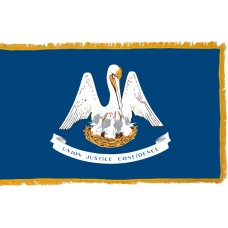 History of the Louisiana Flag

The Louisiana State Flag features a blue background with a large white pelican wounding her breast to feed her three children with her own blood upon the center of the flag. A white banner is included underneath the Pelican with the state motto, "Union Justice Confidence," in black.

The pelican wounding herself to feed her children is a medieval symbol known as the, "pelican in her piety." The symbol represents self-sacrifice and dedication to achieve progress. In medieval Europe it was believed that Pelicans would wound themselves to feed their children blood when other food sources were not available. The Pelican is the State bird of Louisiana and the same imagery is used on the state seal as well as the flag. The Louisiana State Flag was adopted on July 1st, 1912.

Louisiana is located in the Southeastern region of the United States of America. It shares borders with Arkansas, Mississippi, Texas, and the Gulf of Mexico. The capital and second largest city is Baton Rouge., while the largest city in Louisiana is New Orleans. Louisiana was named after Louis XIV, King of France and is often referred to as, "The Pelican State" due to the abundance of brown pelicans that can be found along the coast as well as the fact that the brown pelican is the state animal and a very important symbol. Louisiana is also sometimes referred to as, "The Bayou State" due to its many slow and sluggish rivers as well as, "The Sugar State" due to the sugar cane that is grown in the state.

The earliest residents of Louisiana were Native American including the Choctaw, Natchez, Chitimacha, and Atakapa Tribes among others. Europeans first explored the area that is now Louisiana in 1528, during the Panfilo de Narvaez expedition which is remembered as the expedition where the mouth of the Mississippi River was located. In the 17th Century, the French and French Canadians established a foothold on the Mississippi River.

The first permanent settlement in Louisiana was the Fort Maurepas which was established in 1669 by French officer Pierre Le Moyne D'lberville. In 1682, Robert Cavelier de La Salle named the area Louisiana which translates to (related to Louis) and the City of Natchitoches was established in 1714. In 1718, the French Quarter (Vieux Carre which translates as Old Square) which is now located in New Orleans was founded by Jean-Baptiste Le Moyne and New Orleans was developed around this. In 1763, the Spanish took control of Louisiana but relinquished control to the French in 1800. The Louisiana Purchase in 1803, made Louisiana a territory of the United States. Following the Louisiana Purchase, Louisiana briefly became a territory know as New Orleans until eventually being admitted as the official 18th state of the United States of America on April 6th, 1812.

We offer free images of the Louisiana Flag in four sizes (small, medium, large, and high resolution). These images are distributed royalty free for both personal and educational use and are ideal for use in projects and on websites. If you choose to use one of our images, attribution is appreciated, but not required.

The following html code snippets can be copied and pasted to add an image of the Louisiana State Flag to your website: