We carry authentic Virginia State Flags in both indoor and outdoor varieties. Our flags are proudly made in the United States from durable nylon and are printed with vibrant long-lasting inks. The Virginia state flag is often displayed at schools, government organizations, banks, and other institutions in the state, as well as at the homes of people who take great pride in their Virginia heritage.

Our indoor flags are finished with a pole hem and your choice of with or without golden fringe. Gold Fringe is the traditional way to display an indoor flag, however, some people choose without fringe for a simple and clean look that is also less expensive. If you are looking for a complete indoor presentation set, our Build Your Own Indoor State Flag Set program allows you to select a durable nylon indoor Virginia Flag and choose between premium quality poles, bases, and ornaments, and tassel. For indoor applications, most buyers choose a 3ft. x 5ft. flag with an 8ft. pole, however, if you have a low ceiling, you may opt for a 7ft. pole, which is designed to work with drop ceilings. If you are looking for a very substantial state flag display, our 4ft. x 6ft. indoor flags can be paired with a 9ft. pole for our largest indoor display option.

Our outdoor state flags are finished with a canvas header and brass grommets and are offered in five sizes: 2ft. x 3ft., 3ft. x 5ft., 4ft. x 6ft., 5ft. x 8ft., and 6ft. x 10ft., to fit any sized flagpole. Typically, outdoor flags are flown outside of government organizations and institutions on in-ground and wall-mount flagpoles, however, some people also buy these flags to display their state pride at home. If you are looking for a wall-mount Virginia flag set to display outside of your home, our Build Your Own Outdoor State Flag Set program will allow you to choose between premium quality 6ft. poles and brackets to display the Virginia Flag on your front porch. 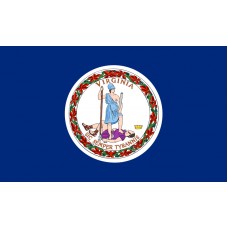 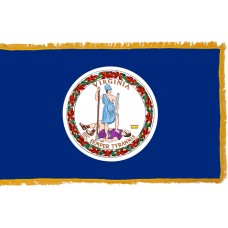 History of the Virginia Flag

The Virginia State Flag features a dark blue background with the seal of Virginia emblazoned upon the center on a white circle. The Virginia State seal features a woman wearing a blue outfit with a blue hat standing in the center with a spear in her right hand a sword in her left hand. The woman has her foot positioned on the chest of a man dressed in a purple roman outfit. The man is holding a chain and a whip and is lying on the floor in defeat with his crown having fallen off of his head. The woman represents Liberty or Virginia, while the man represents King George III or Tyranny. Above this imagery, the word, "Virginia" is emblazoned in bold text and below is the Virginia state motto, "Sic Semper Tyrannis," which translates to "Thus always to tyrants." A green wreath with red flowers surrounds the scene in a circular shape.

The Seal of Virginia was created in July of 1776, just two months after Virginia declared independence from Brittian. The seal was designed to represent Virginia triumphing over the Tyranny of British Rule. The designers of the seal chose design elements from Roman mythology because of their admiration for Roman culture and because they did not want to pay any respect to the British by using British-inspired design elements. Over the years, many variants of the seal were created, so in 1912, the leadership in Virginia created a standardized seal to avoid dependencies. The first Virginia State Flag was adopted in 1861, however, slight changes have been made over the years to the seal and flag design. The current version of the flag has been in use since on February 1st, 1950.

Virginia is located in the Southeastern and Mid-Atlantic region of the United States of America. It shares borders with Maryland, Washington D.C, Atlantic Ocean, North Carolina, Tennessee, Kentucky, and West Virginia. The capital city is Richmond and the largest city is Virginia Beach. Virginia was named after Elizabeth I (England's virgin queen).

Virginia is also referred to as "Old Dominion" due to the fact that Virginia was the oldest territory of the monarchy in England. The first permanent British settlement in the United States of America was in Jamestown, which is the former capital of Virginia. The state is also referred to as "The Mother of Presidents" since 8 of the presidents of the United States of America were born here and "The Birthplace of the Nation" as the American Revolution ended in Virginia. Virginia was originally inhabited by Native American tribes including the Catawba, Powhatan, Cherokee, and Tutelo.

On May 13th, 1607, the British founded the settlement of Jamestown, after which, British Settlers began to arrive in Virginia along with slaves were taken from Africa. Soon after, in 1624, Virginia was established as a colony of Britain. Following the French and Indian war, the British began to impose very high taxes on the colonists, which was one of the leading causes of the Revolutionary War in 1775. During the revolutionary war, Virginia was the setting of many important battles including the Battle of Great Bridge, the Siege of Petersburg, and the Battle of Yorktown, which is where the Colonists defeated the British who surrendered. As a result of their victory, Virginia officially became the 10th state of the United States of America on the 25th June, 1788.

We offer free images of the Virginia Flag in four sizes (small, medium, large, and high resolution). These images are distributed royalty free for both personal and educational use and are ideal for use in projects and on websites. If you choose to use one of our images, attribution is appreciated, but not required.

The following html code snippets can be copied and pasted to add an image of the Virginia State Flag to your website: