We carry authentic New Mexico State Flags in both indoor and outdoor varieties. Our flags are proudly made in the United States from durable nylon and are printed with vibrant long-lasting inks. The New Mexico state flag is often displayed at schools, government organizations, banks, and other institutions in the state, as well as at the homes of people who take great pride in their New Mexico heritage.

Our indoor flags are finished with a pole hem and your choice of with or without golden fringe. Gold Fringe is the traditional way to display an indoor flag, however, some people choose without fringe for a simple and clean look that is also less expensive. If you are looking for a complete indoor presentation set, our Build Your Own Indoor State Flag Set program allows you to select a durable nylon indoor New Mexico Flag and choose between premium quality poles, bases, and ornaments, and tassel. For indoor applications, most buyers choose a 3ft. x 5ft. flag with an 8ft. pole, however, if you have a low ceiling, you may opt for a 7ft. pole, which is designed to work with drop ceilings. If you are looking for a very substantial state flag display, our 4ft. x 6ft. indoor flags can be paired with a 9ft. pole for our largest indoor display option.

Our outdoor state flags are finished with a canvas header and brass grommets and are offered in five sizes: 2ft. x 3ft., 3ft. x 5ft., 4ft. x 6ft., 5ft. x 8ft., and 6ft. x 10ft., to fit any sized flagpole. Typically, outdoor flags are flown outside of government organizations and institutions on in-ground and wall-mount flagpoles, however, some people also buy these flags to display their state pride at home. If you are looking for a wall-mount New Mexico flag set to display outside of your home, our Build Your Own Outdoor State Flag Set program will allow you to choose between premium quality 6ft. poles and brackets to display the New Mexico Flag on your front porch. 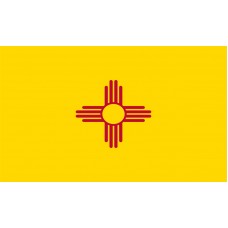 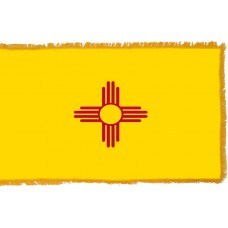 History of the New Mexico Flag

The New Mexico State Flag features a yellow background with a centrally featured red sun symbol. This red sun imagery is revered as a sacred symbol of the Zia, an indigenous tribe at Pueblo. The symbol is comprised of a hollow circle with a red border emitting four groups of four small rays in four directions (north, south, east, and west). The symbol represents the four directions (North, South, East, and West), the four times of day (morning, noon, evening, and night), the four stages of life (childhood, youth, middle age, and old age), the four seasons (winter, spring, summer, and autumn), and the four sacred obligations to life in Zia Culture which include the development of a strong body, a clear mind, a pure spirit, and a devotion to the welfare of others. The red and yellow colors pay homage to the royal colors of Old Spain. The New Mexico State Flag was adopted in 1925 and was the result of a competition to design the new flag. The flag was designed by Harry Mera, who was an archaeologist who specialized in the southwestern region of the United States and thus was very familiar with the Zia and the sun symbol through his work.

New Mexico is located in the Southwestern region of the United States and shares borders with Utah, Texas, Arizona, Oklahoma, and Colorado. The capital city of New Mexico is Santa Fe, which is the fourth largest city in the state by population and the oldest state capital in America. New Mexico is also referred to as "The Land of Enchantment" (Tierra del Encanto) because of the states natural beauty and rich history. During the 1800s, New Mexico was referred to as the "Wild, Wild West" as there were very few laws or law enforcement in the area and it was home to many outlaws, gamblers, and horse thieves.

New Mexico was originally inhabited by Native American tribes and the Pueblo people which included, the Acoma tribes, San Juan, Santa Ana, and Zuni, as well as the Mogollan people and Anasazi. The first European to reach the area was Spanish conqueror Francisco Vasquez de Coronado who arrived in the area with a large army of soldiers and claimed it for Spain. In 1598, it became an official colony of Spain and many Catholic missions were built throughout the area as Priests were hoping to spread Christianity amongst the natives. In 1680, Pope, who was a Pueblo leader revolted against the Spanish as they were settling and claiming all the land, and, for a brief period, the Spanish were pushed out of the area. During the 1700s, more Spanish were arriving to the area and claiming more land, resulting in constant battle throughout the years between the Spanish and the Native Americans.

We offer free images of the New Mexico Flag in four sizes (small, medium, large, and high resolution). These images are distributed royalty free for both personal and educational use and are ideal for use in projects and on websites. If you choose to use one of our images, attribution is appreciated, but not required.

The following html code snippets can be copied and pasted to add an image of the New Mexico State Flag to your website: