We carry authentic Indiana State Flags in both indoor and outdoor varieties. Our flags are proudly made in the United States from durable nylon and are printed with vibrant long-lasting inks. The Indiana state flag is often displayed at schools, government organizations, banks, and other institutions in the state, as well as at the homes of people who take great pride in their Indiana heritage.

Our indoor flags are finished with a pole hem and your choice of with or without golden fringe. Gold Fringe is the traditional way to display an indoor flag, however, some people choose without fringe for a simple and clean look that is also less expensive. If you are looking for a complete indoor presentation set, our Build Your Own Indoor State Flag Set program allows you to select a durable nylon indoor Indiana Flag and choose between premium quality poles, bases, and ornaments, and tassel. For indoor applications, most buyers choose a 3ft. x 5ft. flag with an 8ft. pole, however, if you have a low ceiling, you may opt for a 7ft. pole, which is designed to work with drop ceilings. If you are looking for a very substantial state flag display, our 4ft. x 6ft. indoor flags can be paired with a 9ft. pole for our largest indoor display option.

Our outdoor state flags are finished with a canvas header and brass grommets and are offered in five sizes: 2ft. x 3ft., 3ft. x 5ft., 4ft. x 6ft., 5ft. x 8ft., and 6ft. x 10ft., to fit any sized flagpole. Typically, outdoor flags are flown outside of government organizations and institutions on in-ground and wall-mount flagpoles, however, some people also buy these flags to display their state pride at home. If you are looking for a wall-mount Indiana flag set to display outside of your home, our Build Your Own Outdoor State Flag Set program will allow you to choose between premium quality 6ft. poles and brackets to display the Indiana Flag on your front porch. 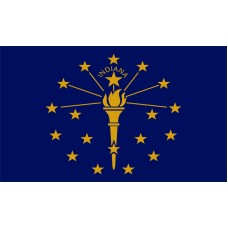 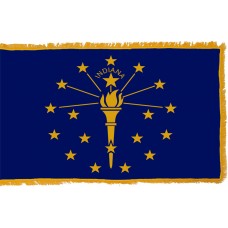 History of the Indiana Flag

The Indiana State Flag is comprised of a vibrant blue background with a centrally featured golden torch emitting rays. Surrounding the torch and rays is an outer circle of thirteen gold stars. Inside of the first circle is a second half-circle of five gold stars on the lower half of the first circle. At the top of the torch is a large golden star with the word "Indiana" written in an arch shape above it in gold.

The torch on the flag represents liberty and enlightenment, while the rays represent the influence that the state has in the country and abroad. The thirteen stars pay homage to the original thirteen colonies, while the five stars represent the five states that joined the union before Indiana. The large star and the word "Indiana" represent Indiana's admission as the 19th state to join the United States. The Indiana State Flag was designed by Paul Hadley, an outstanding water color artist from Indiana, who won a competition that was sponsored by the Daughters of the American Revolution. The current design for the Indiana State Flag was adopted on May 31st, 1917.

Indiana is located in the Midwestern Region and Great Lakes Region of North America. It shares borders with Lake Michigan, Michigan, Ohio, Kentucky, and Illinois. Indiana translates as "Land of the Indians." The most populous and capital city of Indiana is Indianapolis, which was founded in 1821. Indiana is nicknamed, "The Hoosier State," a name that become popular after Indiana resident, John Finley's poem, "The Hoosier's Nest," which was published in 1833. The word "Hoosier" is applicable to residents or anyone who was born in Indiana.

The first inhabitants of Indiana date back to 8000BC and were the Paleo-Indian tribes and migratory Native American tribes. In 1679, the first European to arrive to the area was the French explorer Robert Cavalier Sierur De La Salle. He returned a year later to claim the land for New France and was soon followed by Canadian traders. In 1702, the first trading post was established by Sieur Juchereau and in 1715, Sieur de Vincennes established Fort Miami. British Colonists soon began to arrive to revolt against the Canadian trade which resulted in fighting and conflict between the French and the British. After the French and Indian War (seven years' war), which resulted in British victory, the British took control of Indiana. Following the American Revolutionary War in 1783, through the Treaty of Paris, the British relinquished control of the land to the United States of America and Indiana officially became the 19th state on December 11th, 1816.

Indiana is home to many attractions which include the Eagle Creek Park which is one of the largest municipal parks in the United States of America. It is also home to the "Children's Museum of Indianapolis" which is the largest children's museum in the world and has approximately 1,000,000 visitors a year and over 120,000 artifacts that are divided into three sections: The American Collection, The Cultural World Collection, and The Natural World Collection.

We offer free images of the Indiana Flag in four sizes (small, medium, large, and high resolution). These images are distributed royalty free for both personal and educational use and are ideal for use in projects and on websites. If you choose to use one of our images, attribution is appreciated, but not required.

The following html code snippets can be copied and pasted to add an image of the Indiana State Flag to your website: