We carry authentic Pennsylvania State Flags in both indoor and outdoor varieties. Our flags are proudly made in the United States from durable nylon and are printed with vibrant long-lasting inks. The Pennsylvania state flag is often displayed at schools, government organizations, banks, and other institutions in the state, as well as at the homes of people who take great pride in their Pennsylvania heritage.

Our indoor flags are finished with a pole hem and your choice of with or without golden fringe. Gold Fringe is the traditional way to display an indoor flag, however, some people choose without fringe for a simple and clean look that is also less expensive. If you are looking for a complete indoor presentation set, our Build Your Own Indoor State Flag Set program allows you to select a durable nylon indoor Pennsylvania Flag and choose between premium quality poles, bases, and ornaments, and tassel. For indoor applications, most buyers choose a 3ft. x 5ft. flag with an 8ft. pole, however, if you have a low ceiling, you may opt for a 7ft. pole, which is designed to work with drop ceilings. If you are looking for a very substantial state flag display, our 4ft. x 6ft. indoor flags can be paired with a 9ft. pole for our largest indoor display option.

Our outdoor state flags are finished with a canvas header and brass grommets and are offered in five sizes: 2ft. x 3ft., 3ft. x 5ft., 4ft. x 6ft., 5ft. x 8ft., and 6ft. x 10ft., to fit any sized flagpole. Typically, outdoor flags are flown outside of government organizations and institutions on in-ground and wall-mount flagpoles, however, some people also buy these flags to display their state pride at home. If you are looking for a wall-mount Pennsylvania flag set to display outside of your home, our Build Your Own Outdoor State Flag Set program will allow you to choose between premium quality 6ft. poles and brackets to display the Pennsylvania Flag on your front porch. 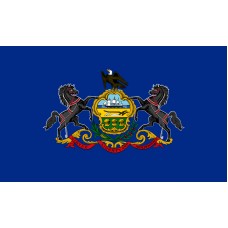 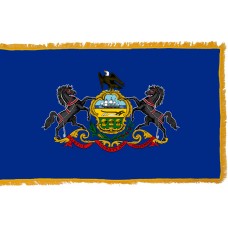 History of the Pennsylvania Flag

The Commonwealth of Pennsylvania's flag features a deep blue background with the state's coat of arms emblazoned prominently in the center. The coat of arms consists of a central shield with an American Bald Eagle perched on top. The shield is supported by two black horses, one on either side. The eagle, a national symbol of the United States, and the color blue represent Pennsylvania's loyalty and allegiance to the USA. The shield contains three symbols: a sailing ship, a plow, and three sheaves of wheat. The ship is said to represent Philadelphia's commerce, the plow signifies Chester County's agricultural industry, and the wheat represents Sussex County's wheat fields.  Sussex county was originally part of Pennsylvania, but is now part of Delaware.  Under the shield is an olive branch and a corn stalk, representing peace and prosperity. A red banner with bold black text bearing the words, "virtue, liberty and independence" is draped under the shield.

The Pennsylvania State Flag is one of the oldest in the Union, having been adopted in 1778. Although it has seen some minor adjustments since its introduction, the Pennsylvania coat of arms has remained essentially unchanged from the original design created by Caleb Townes. Townes was a Quaker from Philadelphia with strong links to William Penn. Penn was also Quaker who is well known as the founder of Pennsylvania; he obtained the land which is now Pennsylvania from the British crown.  The state's name pays tribute to William Penn and the wooded landscape of the state.  Sylvania is a Latin word meaning woods, so the states name signifies "Penn's Woods."

Pennsylvania's landscape is dominated by the north-eastern end of the Appalachian Mountain range, which make up a large part of the state. The state is located in both the Northeastern and Mid-Atlantic regions of the USA. It has coastline on Lake Erie (therefore Canada), and is bounded to the north and east by New York and New Jersey, across the Delaware River. Philadelphia, the Pennsylvania's largest city, is at the south-eastern tip of the state, on the Delaware River. The Capital city, Harrisburg, lies inland to the west. The Mason Dixon line separates the state from Maryland and West Virginia. Ohio lies to the west.

Pennsylvania is one of the 13 founding states of the USA. Its land which was disputed between the British and the Dutch in the 17th Century, when these empires where claiming land and settlements such as New Amsterdam, which became New York. It was highly valued for its natural resources, especially its forests. Eventually the Commonwealth was settled by William Penn and other Quaker Settlers. Later economic development included coal mining, steel making and shipbuilding. The state has stunning scenery, dominated by the Appalachian Mountains.

We offer free images of the Pennsylvania Flag in four sizes (small, medium, large, and high resolution). These images are distributed royalty free for both personal and educational use and are ideal for use in projects and on websites. If you choose to use one of our images, attribution is appreciated, but not required.

The following html code snippets can be copied and pasted to add an image of the Pennsylvania State Flag to your website: