We carry authentic New York State Flags in both indoor and outdoor varieties. Our flags are proudly made in the United States from durable nylon and are printed with vibrant long-lasting inks. The New York state flag is often displayed at schools, government organizations, banks, and other institutions in the state, as well as at the homes of people who take great pride in their New York heritage.

Our indoor flags are finished with a pole hem and your choice of with or without golden fringe. Gold Fringe is the traditional way to display an indoor flag, however, some people choose without fringe for a simple and clean look that is also less expensive. If you are looking for a complete indoor presentation set, our Build Your Own Indoor State Flag Set program allows you to select a durable nylon indoor New York Flag and choose between premium quality poles, bases, and ornaments, and tassel. For indoor applications, most buyers choose a 3ft. x 5ft. flag with an 8ft. pole, however, if you have a low ceiling, you may opt for a 7ft. pole, which is designed to work with drop ceilings. If you are looking for a very substantial state flag display, our 4ft. x 6ft. indoor flags can be paired with a 9ft. pole for our largest indoor display option.

Our outdoor state flags are finished with a canvas header and brass grommets and are offered in five sizes: 2ft. x 3ft., 3ft. x 5ft., 4ft. x 6ft., 5ft. x 8ft., and 6ft. x 10ft., to fit any sized flagpole. Typically, outdoor flags are flown outside of government organizations and institutions on in-ground and wall-mount flagpoles, however, some people also buy these flags to display their state pride at home. If you are looking for a wall-mount New York flag set to display outside of your home, our Build Your Own Outdoor State Flag Set program will allow you to choose between premium quality 6ft. poles and brackets to display the New York Flag on your front porch. 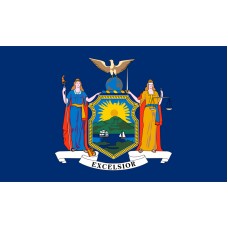 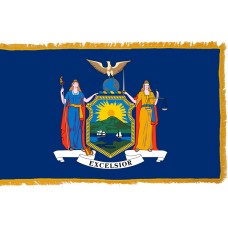 The New York State Flag features a dark blue background with the state's coat of arms featured prominently in the center. The coat of arms features a shield in the center. Inside of the shield is a scene comprised of a blue water, grassy land, three green mountains, a blue sky and a bright yellow sun. A masted ship and a sailboat are navigating the blue water which is representative of the Hudson River, representing commerce. The bright sun represents the bright future of the state. Two women are supporting the shield, one on other side. On the left side of the shield is a woman dressed in blue with a red cape, holding a staff with a liberty cap and stepping on a gold crown. On the right side is a blindfolded woman dressed in orange with a scale in her left hand and a sword in her right hand. The woman on the left represents liberty and she is stepping on the crown signifying independence from British rule. The woman on the right signifies justice; she is blindfolded to represent impartiality and holds a scale in one hand signifying the scales of justice, and a sword in the other hand representing supreme power. Beneath the shield is a white banner with black text that reads, "Excelsior" (which means "higher" or "superior"). Above the shield is an eagle perched on a globe with his wings spread. The eagle is a symbol of the United States; his position and posture over the globe represents dominance and power on the world state. The flag featuring the coat of arms design has been used since 1778, however the current design of the New York State Flag was adopted on April 1st, 1901, when the leadership of New York changed the background color from buff to blue.

New York is located in the Northeastern region of the United States and shares borders with Pennsylvania, New Jersey, Vermont, Massachusetts, Connecticut, Rhode Island, Canada, and the Atlantic Ocean. The capital city is Albany, however, the largest City is New York City, which is the most populated city in the US. New York City, considered by many to be the financial, media, and cultural capital of the world is comprised of fie boroughs: Manhattan, Brooklyn, Queens, The Bronx, and Staten Island. The city is commonly referred to as "The Big Apple" and "The City that Never Sleeps." The name, "New York" was chosen by the British in honor of the Duke of York (James Stuart, the second son of Charles I). New York is nicknamed "The Empire State" due to its tremendous wealth, resources, and global importance.

New York was originally inhabited by two major groups of Native Americans which were the Iroquois and the Algonquian people. The Iroquois tribes included the Mohawk, Oneida, Cayuga, Onondaga, and Seneca. The first European to arrive to the area was British explorer Henry Hudson, who was seeking land for the Dutch. Henry Hudson founded New York Bay and the Hudson River and as a result, the surrounding area and land was claimed by the Dutch who began to settle there shortly after. The first establishment was Fort Nassau in 1614 and was followed by Fort Orange (now known as Albany) in 1624 and Fort Amsterdam (now known as New York City) in 1625. In 1664, an English fleet arrived, taking control of the area and the city was renamed New York. Following the Revolutionary War and the thirteen colonies revolting against the British rule, New York officially became the 11th state on July 26th, 1788.

We offer free images of the New York Flag in four sizes (small, medium, large, and high resolution). These images are distributed royalty free for both personal and educational use and are ideal for use in projects and on websites. If you choose to use one of our images, attribution is appreciated, but not required.

The following html code snippets can be copied and pasted to add an image of the New York State Flag to your website: