We carry authentic Wisconsin State Flags in both indoor and outdoor varieties. Our flags are proudly made in the United States from durable nylon and are printed with vibrant long-lasting inks. The Wisconsin state flag is often displayed at schools, government organizations, banks, and other institutions in the state, as well as at the homes of people who take great pride in their Wisconsin heritage.

Our indoor flags are finished with a pole hem and your choice of with or without golden fringe. Gold Fringe is the traditional way to display an indoor flag, however, some people choose without fringe for a simple and clean look that is also less expensive. If you are looking for a complete indoor presentation set, our Build Your Own Indoor State Flag Set program allows you to select a durable nylon indoor Wisconsin Flag and choose between premium quality poles, bases, and ornaments, and tassel. For indoor applications, most buyers choose a 3ft. x 5ft. flag with an 8ft. pole, however, if you have a low ceiling, you may opt for a 7ft. pole, which is designed to work with drop ceilings. If you are looking for a very substantial state flag display, our 4ft. x 6ft. indoor flags can be paired with a 9ft. pole for our largest indoor display option.

Our outdoor state flags are finished with a canvas header and brass grommets and are offered in five sizes: 2ft. x 3ft., 3ft. x 5ft., 4ft. x 6ft., 5ft. x 8ft., and 6ft. x 10ft., to fit any sized flagpole. Typically, outdoor flags are flown outside of government organizations and institutions on in-ground and wall-mount flagpoles, however, some people also buy these flags to display their state pride at home. If you are looking for a wall-mount Wisconsin flag set to display outside of your home, our Build Your Own Outdoor State Flag Set program will allow you to choose between premium quality 6ft. poles and brackets to display the Wisconsin Flag on your front porch. 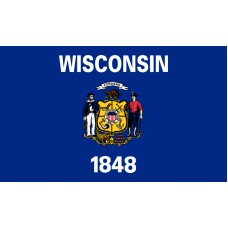 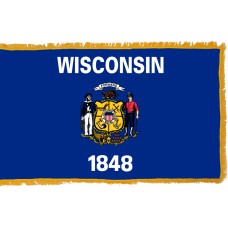 History of the Wisconsin Flag

The Wisconsin State Flag features a blue background with the Wisconsin state coat of arms positioned prominently in the center. Above the coat of arms, "Wisconsin" is emblazoned in bold white text and and below it, the year, "1848" is included. The Wisconsin coat of arms features a golden shield which has been divided into quadrants. The top left quadrant features a plow, the top right quadrant includes a pick and shovel, the bottom left section is emblazoned with an arm and hammer, and the bottom right section features an anchor. The shield is supported by two men. The man on the left side of the shield is holding a rope, and is designed to represent a sailor, while the man on the right is holding a pick-axe and wearing boots and is designed to represent a miner. The sailor represents the shipbuilding industry of the state and the miner represents the early miners of Wisconsin. The pick-axe and shovel represent the mining industry, the arm and hammer represent the manufacturing industry, the anchor represents the many lakes and waterways that Wisconsin has, and the plow represents the agriculture of the state. A Badger rests above the shield on a twisted blue and gold bar, paying homage to the state animal. Above the badger is a white banner with black text that reads, "Forward." Beneath the shield is a cornucopia filled with produce on the left and 13 lead ingots stacked on the right. The thirteen lead ingots represents the mineral wealth of Wisconsin and the Cornucopia represents hope as well as abundance. The center of the shield features a second shield comprised of a blue top half and a bottom half made up of thirteen alternating red and white stripes. A white belt wraps around this inner shield with black text written on the belt with the United States motto, "E Pluribus Unum" which translates to, "Out of many, One." The Wisconsin State flag was adopted on May 1st, 1981.

Wisconsin is located in the North-Central region of the United States of America. It shares borders with Minnesota, Iowa, Illinois, Lake Michigan, and Lake Superior. The capital city is Madison and the largest city is Milwaukee. Wisconsin was named after the Wisconsin River. Wisconsin is often referred to as "The Badger State," in honor of the early miners who were nicknamed "Badgers" due to the fact that they used to dig holes and live underground. Wisconsin was first inhabited by Native America tribes (11 of which still reside there), which included the Dakota Sioux, Winnebago, Menominee, Ojibwe, Potawatomi, Fox, and Sauk.

The first European to arrive to the area was French explorer, Jean Nicolet in 1634. More Europeans began to arrive to the area to trade furs with the natives and in 1667, Frenchman Nicolas Perrot established a trading post at Green Bay and in 1689, the land was claimed for France. In 1754, following the French and Indian war, the British gained control of Wisconsin (as well as all the French land). In 1783, after the Revolutionary War, Wisconsin became part of the part of the Northwest Territory in United States of America, even though it was still under the control of the British. It became part of the Northwest Territory which also included Ohio, Illinois, Indiana, and Michigan. Following Britain's defeat in the war of 1812, Wisconsin came under the control of the United States of America and on May 29th, 1848, it officially became the 30th state.

We offer free images of the Wisconsin Flag in four sizes (small, medium, large, and high resolution). These images are distributed royalty free for both personal and educational use and are ideal for use in projects and on websites. If you choose to use one of our images, attribution is appreciated, but not required.

The following html code snippets can be copied and pasted to add an image of the Wisconsin State Flag to your website: