We carry authentic South Carolina State Flags in both indoor and outdoor varieties. Our flags are proudly made in the United States from durable nylon and are printed with vibrant long-lasting inks. The South Carolina state flag is often displayed at schools, government organizations, banks, and other institutions in the state, as well as at the homes of people who take great pride in their South Carolina heritage.

Our indoor flags are finished with a pole hem and your choice of with or without golden fringe. Gold Fringe is the traditional way to display an indoor flag, however, some people choose without fringe for a simple and clean look that is also less expensive. If you are looking for a complete indoor presentation set, our Build Your Own Indoor State Flag Set program allows you to select a durable nylon indoor South Carolina Flag and choose between premium quality poles, bases, and ornaments, and tassel. For indoor applications, most buyers choose a 3ft. x 5ft. flag with an 8ft. pole, however, if you have a low ceiling, you may opt for a 7ft. pole, which is designed to work with drop ceilings. If you are looking for a very substantial state flag display, our 4ft. x 6ft. indoor flags can be paired with a 9ft. pole for our largest indoor display option.

Our outdoor state flags are finished with a canvas header and brass grommets and are offered in five sizes: 2ft. x 3ft., 3ft. x 5ft., 4ft. x 6ft., 5ft. x 8ft., and 6ft. x 10ft., to fit any sized flagpole. Typically, outdoor flags are flown outside of government organizations and institutions on in-ground and wall-mount flagpoles, however, some people also buy these flags to display their state pride at home. If you are looking for a wall-mount South Carolina flag set to display outside of your home, our Build Your Own Outdoor State Flag Set program will allow you to choose between premium quality 6ft. poles and brackets to display the South Carolina Flag on your front porch. 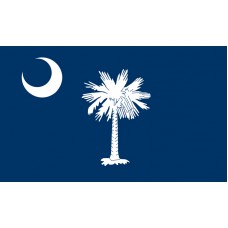 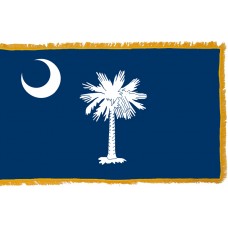 History of the South Carolina Flag

The South Carolina State Flag features a deep blue background with a white crescent moon in the top left corner and a white palm tree featured prominently in the center. The blue color is a reference to the uniforms worn by South Carolinian militiamen during the American Revolutionary War. The Palm tree is native to South Carolina, otherwise known as the Carolina Palmetto or Swamp Cabbage. This species of tree is a distinctive emblem of South Carolina, where it flourishes due to the state's climate.

The origin of the South Carolina State Flag design is based upon the Fort Moultrie Flag. In 1775, the Revolutionary Council of Safety requested Col. William Moultrie to design a flag to be flown by the South Carolina Troops. Moultrie chose a deep blue color to coordinate with the uniforms worn by the militias and added a crescent-looking symbol in the top left corner. The symbol was most likely designed to represent gorget, which is a type of throat armor worn by militiamen during the Revolutionary War.

The Fort Moultrie flag was famously hoisted during the successful colonial defense of Sullivan's Island against the British navy in June, 1776. This involved a 10-hour siege in which British ships bombarded Fort Moultrie and the surrounding land on the Island. The fort was successfully defended, mainly by South Carolinian militiamen, including Moultrie's 2nd South Carolina Regiment who were able to cause the British forces to withdraw, which preserved colonial control over Charleston. Famously, the flag was shot down during the battle, however, Sergeant William Jasper ran out into the open, risking his life to grab the flag and raise it again as a symbolic gesture to motivate his forces.

In 1860, after South Caroline seceded from the union, the General Assembly needed a flag to represent the state. They decided to use Moultrie's design with the addition of a palmetto tree, which represented the fact that Fort Moultrie was built out of palmetto tree logs.

We offer free images of the South Carolina Flag in four sizes (small, medium, large, and high resolution). These images are distributed royalty free for both personal and educational use and are ideal for use in projects and on websites. If you choose to use one of our images, attribution is appreciated, but not required.

The following html code snippets can be copied and pasted to add an image of the South Carolina State Flag to your website: