We carry authentic Mississippi State Flags in both indoor and outdoor varieties. Our flags are proudly made in the United States from durable nylon and are printed with vibrant long-lasting inks. The Mississippi state flag is often displayed at schools, government organizations, banks, and other institutions in the state, as well as at the homes of people who take great pride in their Mississippi heritage.

Our indoor flags are finished with a pole hem and your choice of with or without golden fringe. Gold Fringe is the traditional way to display an indoor flag, however, some people choose without fringe for a simple and clean look that is also less expensive. If you are looking for a complete indoor presentation set, our Build Your Own Indoor State Flag Set program allows you to select a durable nylon indoor Mississippi Flag and choose between premium quality poles, bases, and ornaments, and tassel. For indoor applications, most buyers choose a 3ft. x 5ft. flag with an 8ft. pole, however, if you have a low ceiling, you may opt for a 7ft. pole, which is designed to work with drop ceilings. If you are looking for a very substantial state flag display, our 4ft. x 6ft. indoor flags can be paired with a 9ft. pole for our largest indoor display option.

Our outdoor state flags are finished with a canvas header and brass grommets and are offered in five sizes: 2ft. x 3ft., 3ft. x 5ft., 4ft. x 6ft., 5ft. x 8ft., and 6ft. x 10ft., to fit any sized flagpole. Typically, outdoor flags are flown outside of government organizations and institutions on in-ground and wall-mount flagpoles, however, some people also buy these flags to display their state pride at home. If you are looking for a wall-mount Mississippi flag set to display outside of your home, our Build Your Own Outdoor State Flag Set program will allow you to choose between premium quality 6ft. poles and brackets to display the Mississippi Flag on your front porch. 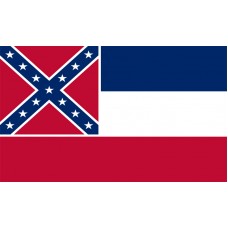 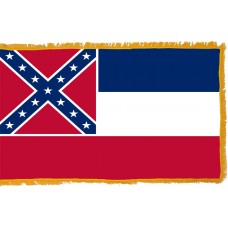 History of the Mississippi Flag

In 2001, Governor Ronnie Musgrove commissioned the design of a new flag which was put up to referendum vote by the people of Mississippi. The proposed flag was similar to the current Mississippi flag, except the confederate battle flag was replaced with a blue canton featuring 20 stars. The stars were arranged in a pattern to represent the 13 colonies, plus the six nations that have ruled over Mississippi. The final star represented Mississippi and the total of 20 stars signified that Mississippi was the 20th member state of the United States. An election was held and the voters in Mississippi elected to keep the current design.

In 2015 there was a mass shooting at a church in Charleston, SC by a white supremacists who attacked and killed black Americans. The killer shared photographs on social media of himself with the confederate battle flag. This renewed controversy over Mississippi's state flag. In the wake of the 2015 Charleston, South Carolina church shooting the University of Mississippi took down the flag because of its symbolism and today, every public university in Mississippi has permanently retired the flag.

In 2014, Laurin Stennis an artist and granddaughter of a former Senator from Mississippi created a proposal for a new design which features a tricolor design of red, white, red, with 20 blue stars in the center. The significance of the stars on this flag is similar to the star pattern on th 2015 version, while the red stripes represent the bloodshed by Mississippian's during various wars. Notably, Stennis' design does not pay homage to any confederate flag, whereas the 2015 proposal was similar in design to the first confederate flag (the Stars and Bars Flag). There are currently no plans by leaders of the state to change the flag.

Mississippi is located in the Southern Region of the United States of America. It shares borders with Tennessee, Alabama, Louisiana, and the Gulf of Mexico. The capital city is Jackson. Mississippi is also known as "The Magnolia State" due to the prevalence of magnolias plants in the state; the magnolia is also the state flower. Mississippi's name is derived from the Ojibwa word "misi-zibi" which translates as "Great river" or "Gathering of water."

The first inhabitants of Mississippi were Native American tribes and Paleo-Indians who were hunter-gatherers. The main tribes included the Chickasaw, Choctaw, Natchez, as well as the Yazoo and Biloxi. The first European to visit the area was Spanish explorer Hernando de Soto in 1540 on his second journey to find the New World. He was also the first European to reach the Mississippi River, which he named "Rio Del Espiritu Santo" which translates as "River of the Holy Spirit." Hernando de Soto claimed the area for Spain. A century later, French explorer La Salle, claimed the area for France and in 1699, the French established the first European settlement at Fort Maurepas. During the 18th century, Mississippi was ruled by the Spanish, English, and the French. During this time, many slaves were being imported to the area by the Europeans. Following the French and Indian war, the British gained control of the area until 1798, when it became a territory of the United States of America. The city of Natchez was originally the capital of Mississippi until it was renamed in 1822 to Jackson. On December 10th, 1817, Mississippi officially became the 20th state of the United States of America.

Mississippi is home to the famous Mississippi River which is the largest river in the United States of America and one of the major river systems in the world. The river crossed ten states which include Minnesota, Wisconsin, Iowa, Illinois, Missouri, Kentucky, Tennessee, Arkansas, Mississippi, and Louisiana and is often referred to as "Old Man River."

The Magnolia State, The Hospitality State

We offer free images of the Mississippi Flag in four sizes (small, medium, large, and high resolution). These images are distributed royalty free for both personal and educational use and are ideal for use in projects and on websites. If you choose to use one of our images, attribution is appreciated, but not required.

The following html code snippets can be copied and pasted to add an image of the Mississippi State Flag to your website: