We carry authentic South Dakota State Flags in both indoor and outdoor varieties. Our flags are proudly made in the United States from durable nylon and are printed with vibrant long-lasting inks. The South Dakota state flag is often displayed at schools, government organizations, banks, and other institutions in the state, as well as at the homes of people who take great pride in their South Dakota heritage.

Our indoor flags are finished with a pole hem and your choice of with or without golden fringe. Gold Fringe is the traditional way to display an indoor flag, however, some people choose without fringe for a simple and clean look that is also less expensive. If you are looking for a complete indoor presentation set, our Build Your Own Indoor State Flag Set program allows you to select a durable nylon indoor South Dakota Flag and choose between premium quality poles, bases, and ornaments, and tassel. For indoor applications, most buyers choose a 3ft. x 5ft. flag with an 8ft. pole, however, if you have a low ceiling, you may opt for a 7ft. pole, which is designed to work with drop ceilings. If you are looking for a very substantial state flag display, our 4ft. x 6ft. indoor flags can be paired with a 9ft. pole for our largest indoor display option.

Our outdoor state flags are finished with a canvas header and brass grommets and are offered in five sizes: 2ft. x 3ft., 3ft. x 5ft., 4ft. x 6ft., 5ft. x 8ft., and 6ft. x 10ft., to fit any sized flagpole. Typically, outdoor flags are flown outside of government organizations and institutions on in-ground and wall-mount flagpoles, however, some people also buy these flags to display their state pride at home. If you are looking for a wall-mount South Dakota flag set to display outside of your home, our Build Your Own Outdoor State Flag Set program will allow you to choose between premium quality 6ft. poles and brackets to display the South Dakota Flag on your front porch. 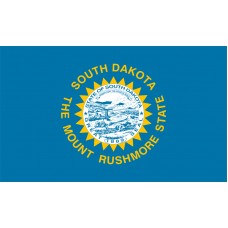 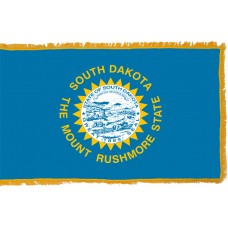 History of the South Dakota Flag

The great seal of South Dakota is comprised of an inner circle with a scene depicting a farmer plowing the field with two horses, representing the state's agricultural industry. The central feature of the scene is a smelting furnace with clouds of smoke billowing out into the sky, which represents South Dakota's mining industry. The Missouri river runs through the scene with a steamship navigating the waters, and hills in the background. The steamship on the Missouri River represents the commerce and transportation of the state and the sky and the hills in the background represent South Dakota's natural resources and natural beauty. In the sky, an arched banner is included with the state motto emblazoned upon it, "Under God The People Rule." Surrounding the inner circle of the seal is a larger outer circle with bold text that reads, "State of South Dakota Great Seal 1889." The reference to 1889 on the outer ring of the seal is the year South Dakota officially became a state. The South Dakota state flag was adopted on November 9th, 1992.

South Dakota is located in the Midwestern Region of the United States of America. It shares borders with North Dakota, Minnesota, Iowa, Nebraska, Wyoming, and Montana. The capital city is Pierre and the largest city is Sioux Falls. South Dakota was named after the "Dakota" who were a tribe of Sioux Indians and translates as "friend." South Dakota is also referred to as "The Mount Rushmore State" due to its very famous and well-known attraction. Prior to 1992, the state motto which appeared on the flag was, "The Sunshine State," however the leaders of the state voted to change the motto since "The Sunshine State" was also the well-known motto of Florida. When most people thought of "The Sunshine State," they though of Florida. The leaders choce, "The Mount Rushmore State" as the new motto since it undeniable describes South Dakota specifically.

South Dakota has been inhabited for thousands of years. The earliest tribes to reside in the area were the Cheyenne, Arikara, Ponca, and Lakota, until the Sioux arrived in the 1700s. The first Europeans to visit the area were French brothers, Francois and Louis-Joseph de La Verendrye in 1743, who proceeded to claim the land for France.

In 1803, following the Louisiana Purchase, the area became part of the United States of America. The first settlement in the state was established in 1855 at Fort Pierre during the Lewis and Clarke expedition. In 1861, the Dakota territory was established which included South Dakota, North Dakota, Wyoming, and Montana. As more people arrived in the area, conflict developed between the Americans and the Sioux tribes. In 1874, after gold was found in the Black Hills, even more people flocked to the area seeking wealth. On November 2nd, 1889, the Dakota territory was split in half and North Dakota and South Dakota officially became the 39th and 40th states of the United States of America (it is unclear, even today, which one officially became a state first).

We offer free images of the South Dakota Flag in four sizes (small, medium, large, and high resolution). These images are distributed royalty free for both personal and educational use and are ideal for use in projects and on websites. If you choose to use one of our images, attribution is appreciated, but not required.

The following html code snippets can be copied and pasted to add an image of the South Dakota State Flag to your website: