We carry authentic Washington State Flags in both indoor and outdoor varieties. Our flags are proudly made in the United States from durable nylon and are printed with vibrant long-lasting inks. The Washington state flag is often displayed at schools, government organizations, banks, and other institutions in the state, as well as at the homes of people who take great pride in their Washington heritage.

Our indoor flags are finished with a pole hem and your choice of with or without golden fringe. Gold Fringe is the traditional way to display an indoor flag, however, some people choose without fringe for a simple and clean look that is also less expensive. If you are looking for a complete indoor presentation set, our Build Your Own Indoor State Flag Set program allows you to select a durable nylon indoor Washington Flag and choose between premium quality poles, bases, and ornaments, and tassel. For indoor applications, most buyers choose a 3ft. x 5ft. flag with an 8ft. pole, however, if you have a low ceiling, you may opt for a 7ft. pole, which is designed to work with drop ceilings. If you are looking for a very substantial state flag display, our 4ft. x 6ft. indoor flags can be paired with a 9ft. pole for our largest indoor display option.

Our outdoor state flags are finished with a canvas header and brass grommets and are offered in five sizes: 2ft. x 3ft., 3ft. x 5ft., 4ft. x 6ft., 5ft. x 8ft., and 6ft. x 10ft., to fit any sized flagpole. Typically, outdoor flags are flown outside of government organizations and institutions on in-ground and wall-mount flagpoles, however, some people also buy these flags to display their state pride at home. If you are looking for a wall-mount Washington flag set to display outside of your home, our Build Your Own Outdoor State Flag Set program will allow you to choose between premium quality 6ft. poles and brackets to display the Washington Flag on your front porch. 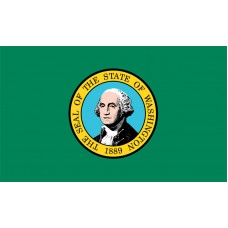 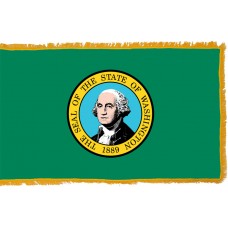 History of the Washington State Flag

The Washington State Flag features a dark green background with the Washington state seal emblazoned prominently in the center. The state seal of Washington is comprised of a blue circle with the image of George Washington (whom the state is named after) inside. A second circle of gold encircles the first circle and features black text that reads, "The Seal of the State of Washington 1889." The Washington State Flag is unique in that it is the only state flag that uses the color green and the only state flag that uses an image of a former President. The green color on the flag is representative of the green fields of Western Washington, while the gold color represents the wheat fields of Eastern Washington. The current design of the Washington state flag was adopted on the March 5th, 1923.

Washington State is located in the Northwestern region of the United States of America and is one of the wealthiest states. It shares borders with British Columbia, Idaho, Oregon, and the Pacific Ocean. The capital of Washington is Olympia and the largest city is Seattle. Washington is named after the first president of the United States of America, George Washington. The state was originally going to be called "Columbia" after the Columbia River and Columbia District, however, it was determined that the name was too similar to the District of Columbia, so the state was instead named after the former president. Washington is nicknamed, "The Evergreen State" due to the large number of forests that the state is home to; approximately half of Washington is covered by forests. Washington is also sometimes referred to as "The Chinook State" or "The Green Tree State."

Washington was originally inhabited by American Native tribes including the Yakima, Chinook, Makah, Lummi, Nez Perce, and Spokane tribes. The first European to arrive to the area was the Spanish explorer Captain Bruno Heceta who claimed the land for Spain. Other European explorers followed shortly after, including James Cook in 1778 and George Vancouver in 1792. George Vancouver discovered the Puget Sound Region and claimed that area for Britain. In 1805, American explorers, Lewis and Clark arrived in the area and during the first half of the 1800s, the area of Washington was shared between Britain and America as part of a "joint occupancy" agreement.

In 1846, the United States of America gained control of Washington, making it part of the Oregon territory along with Oregon, Idaho, Wyoming, and Montana. In 1853, the people of the northern part of the Oregon Territory sought to create their own territory, and their request was granted by the US government, thus forming the state of Washington. Originally, Washington extended further to the east until 1863, when Idaho was created, forming the current shape of Washington State that we know today. Washington gained its statehood on November 11, 1889, making it the 42nd state in the United States of America.

Washington is visited by tourist who are attracted to the beautiful scenery and dynamic cities in the state. The Olympic National Park is one of the states most popular attractions. This park is home to the Hoh Rainforests, which includes beautiful trees that are approximately 500 years old. The Space Needle is another popular attraction; This observation deck that stands 520 feet from the ground and gives visitors amazing views of the city. The San Juan Islands are another popular attraction, which can be reached either by seaplane or ferry. The most visited islands are the Lopez Island, Orcas Island, and San Juan Island. The islands are renowned for their whale watching and kayaking.

We offer free images of the Washington Flag in four sizes (small, medium, large, and high resolution). These images are distributed royalty free for both personal and educational use and are ideal for use in projects and on websites. If you choose to use one of our images, attribution is appreciated, but not required.

The following html code snippets can be copied and pasted to add an image of the Washington State Flag to your website: