We carry authentic Colorado State Flags in both indoor and outdoor varieties. Our flags are proudly made in the United States from durable nylon and are printed with vibrant long-lasting inks. The Colorado state flag is often displayed at schools, government organizations, banks, and other institutions in the state, as well as at the homes of people who take great pride in their Colorado heritage.

Our indoor flags are finished with a pole hem and your choice of with or without golden fringe. Gold Fringe is the traditional way to display an indoor flag, however, some people choose without fringe for a simple and clean look that is also less expensive. If you are looking for a complete indoor presentation set, our Build Your Own Indoor State Flag Set program allows you to select a durable nylon indoor Colorado Flag and choose between premium quality poles, bases, and ornaments, and tassel. For indoor applications, most buyers choose a 3ft. x 5ft. flag with an 8ft. pole, however, if you have a low ceiling, you may opt for a 7ft. pole, which is designed to work with drop ceilings. If you are looking for a very substantial state flag display, our 4ft. x 6ft. indoor flags can be paired with a 9ft. pole for our largest indoor display option.

Our outdoor state flags are finished with a canvas header and brass grommets and are offered in five sizes: 2ft. x 3ft., 3ft. x 5ft., 4ft. x 6ft., 5ft. x 8ft., and 6ft. x 10ft., to fit any sized flagpole. Typically, outdoor flags are flown outside of government organizations and institutions on in-ground and wall-mount flagpoles, however, some people also buy these flags to display their state pride at home. If you are looking for a wall-mount Colorado flag set to display outside of your home, our Build Your Own Outdoor State Flag Set program will allow you to choose between premium quality 6ft. poles and brackets to display the Colorado Flag on your front porch. 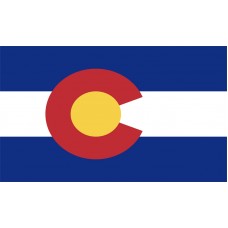 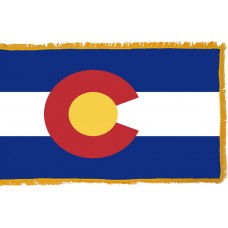 History of the Colorado Flag

The Colorado State Flag features a design that is split into three horizontal stripes; the top and bottom stripes are blue, while the center stripe is white. The central and most prominent feature of the flag is a large red "C" that is filled with a golden circle. The red, white, and blue colors of the flag are pay homage to the colors of the United States, while also bearing additional meanings that are specific to the state of Colorado.

The blue color represents the clear blue skies, the white color signifies the snow-capped Rocky Mountains, the red color stands for the rich soil of Colorado, and the yellow/gold color symbolizes gold-mining as well as the sunshine. Additionally, the combination of blue and white references the state flower, the "Columbine," and the central "C" stands for Colorado. The first Colorado State Flag was adopted on June 5th, 1911 and was designed by Andrew Carlisle Carson. The Colorado State Flag used today was modified (the "C" in the center of the flag was made larger) on March 31st, 1964.

Colorado is a Western state in the Rocky Mountains region of the United States, and shares borders with New Mexico, Utah, Oklahoma, Kansas, Nebraska, and Wyoming. The capital city is Denver, which is also known as the "Mile-High City" due to the fact that it stands 5,280 feet (one mile) above sea level. Colorado is also referred to as the "Centennial State" as it became an official state the same year that the United States of America turned 100 years old. The State of Colorado gets its name from its namesake, the Colorado River. The name translates as "colored red" and was given that title by the Spanish explorers that traveled through the area due to the color of the river and its muddy hue.

The original inhabitants of the area where Colorado sits were American native tribes that included the Ancient Pueblo people, Ute, Arapho, and Cheyenne. The first European to reach the area was Francisco de Corenado in 1541, who was a Spanish Explorer. He came to the area to seek gold but left when he was unable to find it. The area was then visited in 1682 by French explorer Robert de La Salle, who claimed the land for France, making it part of the France Louisiana territory.

We offer free images of the Colorado Flag in four sizes (small, medium, large, and high resolution). These images are distributed royalty free for both personal and educational use and are ideal for use in projects and on websites. If you choose to use one of our images, attribution is appreciated, but not required.

The following html code snippets can be copied and pasted to add an image of the Colorado State Flag to your website: