We carry authentic Wyoming State Flags in both indoor and outdoor varieties. Our flags are proudly made in the United States from durable nylon and are printed with vibrant long-lasting inks. The Wyoming state flag is often displayed at schools, government organizations, banks, and other institutions in the state, as well as at the homes of people who take great pride in their Wyoming heritage.

Our indoor flags are finished with a pole hem and your choice of with or without golden fringe. Gold Fringe is the traditional way to display an indoor flag, however, some people choose without fringe for a simple and clean look that is also less expensive. If you are looking for a complete indoor presentation set, our Build Your Own Indoor State Flag Set program allows you to select a durable nylon indoor Wyoming Flag and choose between premium quality poles, bases, and ornaments, and tassel. For indoor applications, most buyers choose a 3ft. x 5ft. flag with an 8ft. pole, however, if you have a low ceiling, you may opt for a 7ft. pole, which is designed to work with drop ceilings. If you are looking for a very substantial state flag display, our 4ft. x 6ft. indoor flags can be paired with a 9ft. pole for our largest indoor display option.

Our outdoor state flags are finished with a canvas header and brass grommets and are offered in five sizes: 2ft. x 3ft., 3ft. x 5ft., 4ft. x 6ft., 5ft. x 8ft., and 6ft. x 10ft., to fit any sized flagpole. Typically, outdoor flags are flown outside of government organizations and institutions on in-ground and wall-mount flagpoles, however, some people also buy these flags to display their state pride at home. If you are looking for a wall-mount Wyoming flag set to display outside of your home, our Build Your Own Outdoor State Flag Set program will allow you to choose between premium quality 6ft. poles and brackets to display the Wyoming Flag on your front porch. 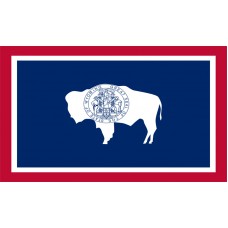 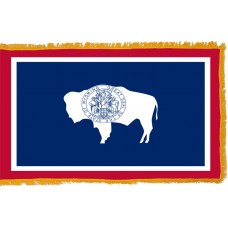 History of the Wyoming Flag

The Wyoming State Flag features a blue background with a white and red border around the edge. The central feature of the flag is a white silhouette of a bison in the center, with the Wyoming State seal in the middle of the bison. The state seal features a central liberty-statue that is holding a staff with a banner that reads, "Equal Rights," representing the equal status for women in Wyoming. On each side of the statue are male figures and pillars with burning lamps on the top. The pillar on the left has a ribbon wrapped around it that reads, "Livestock, Grain" and the pillar on the right has a ribbon wrapped around it that reads, "Mines, Oil." The burning lamps on the pillars represents the "Light of Knowledge," while the two male figures represent the livestock and mining industry of Wyoming. The "Livestock, grain, mines, and oil" written on the pillars are the four major industries of Wyoming. Beneath the statue is a shield with an eagle perched on top. The top portion of the shield features one five-point star, while the bottom portion of the shield contains thirteen alternating blue and white stripes. Underneath the shield are the years, "1869" and "1890." The red, white, and blue colors used on the Wyoming State Flag pay homage to the colors of the United States and recognize the loyalty of Wyoming to the USA. The eagle, the colors, and the shield of thirteen stripes represents loyalty and allegiance to the United States. In addition, the red color also signifies the native Americans who inhabited Wyoming and the blood of those who gave their lives for the state. The white color stands for the purity of Wyoming. The blue color represents the sky and mountains of Wyoming as well as justice and virility. The bison represents the wildlife of Wyoming and the strength of the people. The Wyoming State Flag was designed by Verna Keays who won the competition held by the Daughters of the American Revolution to design the new state flag. The flag was adopted on March 4th, 1917.

Wyoming is the least populated state in the United States, is located in the mountain region of the country, and shares borders with Montana, Idaho, Utah, Colorado, Nebraska and South Dakota. The capital city is Cheyenne, which is also the largest city in the state. Wyoming was named after the Wyoming valley and originates from the word "Mecheweamiing," which translates as "land of the plains." Wyoming is also referred to as "The Equality State" as it was the first state in America that granted women voting rights.

The first inhabitants of Wyoming were the Paleo-Indians. It soon became inhabited with Native American tribes including the Cheyenne, Arapho, Crow, Ute, and Shoshone. During the 1700s and 1800s, many countries tried to claim the area of Wyoming including France, Spain, Mexico, Great Britain, and America, however the land was never settled and still remained in control of the native American tribes who inhabited the area.

The Louisiana purchase in 1803 included a large section of Wyoming which came under the control of the United States. The first "white" man that came to explore the area was American John Colter and the first permanent settlement that was established was Fort Laramie in 1834. Even though the land was being settled, there were still very few inhabitants or people that lived here apart from the native people. In 1846, the United States gained control of the Southwestern region of Wyoming and in 1869, it became part of the Wyoming Territory. On July 10th, 1890, Wyoming officially became the 44th state of the United States of America.

We offer free images of the Wyoming Flag in four sizes (small, medium, large, and high resolution). These images are distributed royalty free for both personal and educational use and are ideal for use in projects and on websites. If you choose to use one of our images, attribution is appreciated, but not required.

The following html code snippets can be copied and pasted to add an image of the Wyoming State Flag to your website: