We carry authentic North Carolina State Flags in both indoor and outdoor varieties. Our flags are proudly made in the United States from durable nylon and are printed with vibrant long-lasting inks. The North Carolina state flag is often displayed at schools, government organizations, banks, and other institutions in the state, as well as at the homes of people who take great pride in their North Carolina heritage.

Our indoor flags are finished with a pole hem and your choice of with or without golden fringe. Gold Fringe is the traditional way to display an indoor flag, however, some people choose without fringe for a simple and clean look that is also less expensive. If you are looking for a complete indoor presentation set, our Build Your Own Indoor State Flag Set program allows you to select a durable nylon indoor North Carolina Flag and choose between premium quality poles, bases, and ornaments, and tassel. For indoor applications, most buyers choose a 3ft. x 5ft. flag with an 8ft. pole, however, if you have a low ceiling, you may opt for a 7ft. pole, which is designed to work with drop ceilings. If you are looking for a very substantial state flag display, our 4ft. x 6ft. indoor flags can be paired with a 9ft. pole for our largest indoor display option.

Our outdoor state flags are finished with a canvas header and brass grommets and are offered in five sizes: 2ft. x 3ft., 3ft. x 5ft., 4ft. x 6ft., 5ft. x 8ft., and 6ft. x 10ft., to fit any sized flagpole. Typically, outdoor flags are flown outside of government organizations and institutions on in-ground and wall-mount flagpoles, however, some people also buy these flags to display their state pride at home. If you are looking for a wall-mount North Carolina flag set to display outside of your home, our Build Your Own Outdoor State Flag Set program will allow you to choose between premium quality 6ft. poles and brackets to display the North Carolina Flag on your front porch. 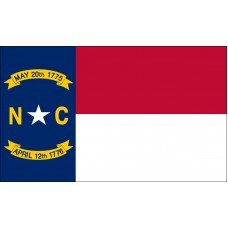 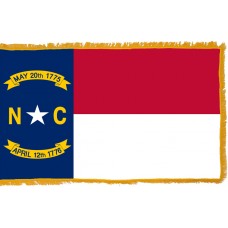 History of the North Carolina Flag

The North Carolina State Flag is split horizontally into two equal-sized bars of red on the top and blue on the bottom. The hoist-side of the flag features a blue vertical band. Inside of the blue band are the gold letters reading, "NC," which stands for North Carolina, with a white five-pointed star in between the two letters. Above and below this are gold banners. The top banner reads, "May 20th, 1775," while the bottom banner reads, "April 12th, 1776." The red, white, and blue colors incorporated into the design of this flag pay homage to the United States of America. The date May 20th, 1775, celebrates the date when the leaders of North Carolina signed the Mecklenburg Declaration of Independence, which made them the first of the 13 colonies to declare independence from the British. The second date April 12th, 1776 pays tribute to the date of the Halifax Resolves, when the colony took official action to declare independence from Great Britain. The North Carolina State Flag was adopted in March 1885.

North Carolina was inhabited with Native American tribes which include, Cherokee, Catawba, Tuscarora, and Croatan. The first European to arrive to the area was Spanish explorer Giovanni da Verrazano in 1524, followed by Spanish explorer Juan Pardo who founded the fort San Juan in 1567. In 1584, English explorers Philip Amadas and Arthur Barlowe arrived in the area under the instruction of Sir Walter Raleigh to find land in North America for Queen Elizabeth I. During this period, the English established the Roanoke Colony which was led by John White and was the first European colony in North America. John White returned to England for more supplies, and when he returned to North Carolina, the colony had disappeared; It is still unknown today what caused its demise. During the late 1600s and 1700s, large amounts of English people settled in North Carolina; in 1705 the first permanent town was established in Bath. The influx of British people was the source of frustration and anger for the Native Americans who previously populated the area and could see their land being systematically taken from them. In 1711, the Tuscarora tribe fought back against the intrusion and the Tuscarora war began, however, by 1713, the tribe had been defeated. In 1776, North Carolina signed the declaration of independence and on November 21st, 1789, officially became the 12th state of the United States of America.

We offer free images of the North Carolina Flag in four sizes (small, medium, large, and high resolution). These images are distributed royalty free for both personal and educational use and are ideal for use in projects and on websites. If you choose to use one of our images, attribution is appreciated, but not required.

The following html code snippets can be copied and pasted to add an image of the North Carolina State Flag to your website: