We carry authentic Hawaii State Flags in both indoor and outdoor varieties. Our flags are proudly made in the United States from durable nylon and are printed with vibrant long-lasting inks. The Hawaii state flag is often displayed at schools, government organizations, banks, and other institutions in the state, as well as at the homes of people who take great pride in their Hawaii heritage.

Our indoor flags are finished with a pole hem and your choice of with or without golden fringe. Gold Fringe is the traditional way to display an indoor flag, however, some people choose without fringe for a simple and clean look that is also less expensive. If you are looking for a complete indoor presentation set, our Build Your Own Indoor State Flag Set program allows you to select a durable nylon indoor Hawaii Flag and choose between premium quality poles, bases, and ornaments, and tassel. For indoor applications, most buyers choose a 3ft. x 5ft. flag with an 8ft. pole, however, if you have a low ceiling, you may opt for a 7ft. pole, which is designed to work with drop ceilings. If you are looking for a very substantial state flag display, our 4ft. x 6ft. indoor flags can be paired with a 9ft. pole for our largest indoor display option.

Our outdoor state flags are finished with a canvas header and brass grommets and are offered in five sizes: 2ft. x 3ft., 3ft. x 5ft., 4ft. x 6ft., 5ft. x 8ft., and 6ft. x 10ft., to fit any sized flagpole. Typically, outdoor flags are flown outside of government organizations and institutions on in-ground and wall-mount flagpoles, however, some people also buy these flags to display their state pride at home. If you are looking for a wall-mount Hawaii flag set to display outside of your home, our Build Your Own Outdoor State Flag Set program will allow you to choose between premium quality 6ft. poles and brackets to display the Hawaii Flag on your front porch. 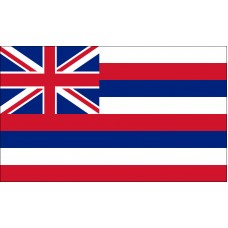 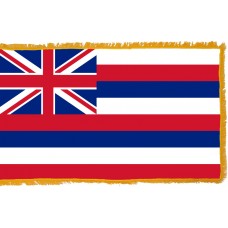 History of the Hawaii Flag

The Hawaii State Flag features eight horizontal stripes which alternate between red, white, and blue. In the top left-hand corner of the flag is the "Union Jack" (flag of the United Kingdom).

Hawaii is a collection of 137 islands located in the central Pacific ocean which were formed by volcanic activity. The Hawaiian islands are located 2,397 miles west of San Francisco and 5,293 miles east of Manila, the capital of the Philippines. The islands were first inhabited by Polynesians, who lived in total isolation for more than 500 years. The first European to discover the islands was James Cook who arrived in 1778. Cook named the islands, "Sandwich Islands" after John Montague (the 4th Earl of Sandwich). Within five years of Cook's arrival, the British had completely conquered and unified the Hawaiian islands and established the "Kingdom of Hawaii" in 1795. After the British discovered the islands, wealthy Americans began immigrating to the islands seeking land to start sugar plantations. In conjunction with this, many people from Asia (Japan, China, and the Philippines) began immigrating to the islands in search of work as plantation laborers.

During this time period, Hawaii flew the British Flag unofficially. The first leader of the Republic of Hawaii, King Kamehameha I, was concerned that flying the British flag during the War of 1812 signaled Hawaii's loyalty to Britain and could anger their allies in the United States. At one point, he was said to have flown an American Flag as to not anger the Americans, which in turn angered the British. Eventually, in 1816, Kamehameha commissioned a flag that featured elements of both the British Flag and the American Flag to be used as the Hawaiian Flag. The red, white, and blue stripes payed homage to the American Flag, while the British Flag's inclusion in the canton symbolized Great Britain. Since 1816, the arrangement of the stripes and number of stripes has changed/varied slightly however, the flag that Kamehameha commissioned is essentially the same as the Hawaiian Flag flown today. Hawaii is the only US State flag that features a flag of a foreign country. The eight stripes on the flag represent the eight major islands of Hawaii which are Hawai'i, Maui, Kaho'olawe, Lana'I, Moloka'i, O'ahu, Kaua'I, and Ni'hau).

In 1893, the "Kingdom of Hawaii" became the "Republic of Hawaii" for a short period and in 1898, the government agreed to join the United States of America as the "Territory of Hawaii." The islands became an official state on August 21st, 1959 and the 50th state of the United states of America. Hawaii was one of the few states that was independent before it became a state (the others are Vermont, Texas, and California).

Hawaii is located in Oceania. It is one of only two US states that does not share borders with any other states (the other one being Alaska). It is also the only state that is composed entirely of islands and the only state that is outside North America. The largest and capital city of Hawaii is called Honolulu which translates as "sheltered harbor" or "calm port." Hawaii is referred to as "The Aloha State" as "Aloha" has various meanings which include love, affection, peace, compassion, mercy, hello and goodbye, and is the most used word in Hawaii and often used as a greeting.

Hawaii is home to some of the worlds  most beautiful white sand beaches with crystal clear waters. The most famous beach in Hawaii is Waikiki Beach. An extinct volcano called, "Diamond Head" is another popular tourist destination which is located at the end of Waikiki. Another famous landmark in Hawaii is the "USS Arizona Memorial" at Pearl Harbor, which is the burial place of 102 sailors and marines who lost their lives during the Japanese attack on Pearl Harbor on December 7th, 1941.

We offer free images of the Hawaii Flag in four sizes (small, medium, large, and high resolution). These images are distributed royalty free for both personal and educational use and are ideal for use in projects and on websites. If you choose to use one of our images, attribution is appreciated, but not required.

The following html code snippets can be copied and pasted to add an image of the Hawaii State Flag to your website: