We carry authentic Connecticut State Flags in both indoor and outdoor varieties. Our flags are proudly made in the United States from durable nylon and are printed with vibrant long-lasting inks. The Connecticut state flag is often displayed at schools, government organizations, banks, and other institutions in the state, as well as at the homes of people who take great pride in their Connecticut heritage.

Our indoor flags are finished with a pole hem and your choice of with or without golden fringe. Gold Fringe is the traditional way to display an indoor flag, however, some people choose without fringe for a simple and clean look that is also less expensive. If you are looking for a complete indoor presentation set, our Build Your Own Indoor State Flag Set program allows you to select a durable nylon indoor Connecticut Flag and choose between premium quality poles, bases, and ornaments, and tassel. For indoor applications, most buyers choose a 3ft. x 5ft. flag with an 8ft. pole, however, if you have a low ceiling, you may opt for a 7ft. pole, which is designed to work with drop ceilings. If you are looking for a very substantial state flag display, our 4ft. x 6ft. indoor flags can be paired with a 9ft. pole for our largest indoor display option.

Our outdoor state flags are finished with a canvas header and brass grommets and are offered in five sizes: 2ft. x 3ft., 3ft. x 5ft., 4ft. x 6ft., 5ft. x 8ft., and 6ft. x 10ft., to fit any sized flagpole. Typically, outdoor flags are flown outside of government organizations and institutions on in-ground and wall-mount flagpoles, however, some people also buy these flags to display their state pride at home. If you are looking for a wall-mount Connecticut flag set to display outside of your home, our Build Your Own Outdoor State Flag Set program will allow you to choose between premium quality 6ft. poles and brackets to display the Connecticut Flag on your front porch. 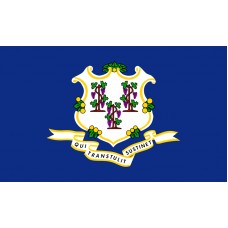 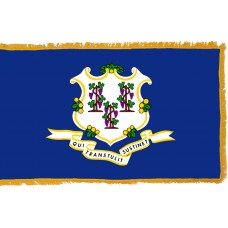 History of the Connecticut Flag

The Connecticut State Flag features a vibrant blue background. The central feature of the flag is a white shield that includes three grapevines (each grapevine has three bunches of purple grapes). Below the shield is a white banner printed with the state motto, "Qui Trastulit Sustinet" which translates as, "He who translated still sustains." The three grapevines on the shield have dual symbolism; They represent religion, liberty, and knowledge as well as the three earliest colonies in the state: Hartford, Windsor, and Wethersfield.

Abby Day Slocomb was the wife of Confederate Capt. Cuthbert H. Slocomb. After his death, Abby moved to a house across the street from Fort Griswold in 1888 and in 1893 founded the Anna Warner Bailey Chapter of the "Daughters of the American Revolution." In her role as the founder of the organization, she hosted many gatherings and ceremonies and was outraged that Connecticut did not have an official state flag. The Daughters of the American Revolution, led by Slocumb created several designs and lobbied the state legislature to adopt a state flag.

Slocumb prevailed when the Connecticut State Flag was introduced in 1895 by Governor Owen Vincent Coffin and was officially adopted on September 9th, 1897. The design was derived from the submissions of the Daughters of the American Revolution. A print of the original submission is currently on display at the Fort Griswold Battlefield State Park Museum, which Slocomb was also instrumental in creating.

Connecticut is named after the Connecticut River; the name is derived from the Algonquian word, "quinatucquet" which translates as, "at the long estuary." Connecticut is nicknamed the "Constitution State" as it is home to the first written constitution, "The Fundamental Orders of Connecticut," which is said to have served as one of the inspirations for the US constitution.

The first Native American Tribes to inhabit the area where Mohegan, Pequot, and Niantic, while the first European to arrive to the area was Dutch Explorer, Adriaen Block, in 1614. British settlers soon began arriving to the area and the first settlement was established in 1633 and the area became a British Colony. After the revolutionary war, Connecticut was the fifth state to be ratified.

Connecticut is a located in the Northeastern, New England region of the United States of America. It borders Long Island Sound, New York, Massachusetts, and Rhode Island. The state is conveniently positioned near all of the major industrial cities of the east coast of the United Sates. Its capital city, Hartford is located in the center of the state. Connecticut is rectangular-shaped with a panhandle that reaches southwest towards the New York border. Though Connecticut is the third smallest state in the country, it has an extremely dense population, with over 3.5 million people calling the state home. Today, the state is known for its rich history, beautiful scenery, and convenient access to all major northeastern cities.

We offer free images of the Connecticut Flag in four sizes (small, medium, large, and high resolution). These images are distributed royalty free for both personal and educational use and are ideal for use in projects and on websites. If you choose to use one of our images, attribution is appreciated, but not required.

The following html code snippets can be copied and pasted to add an image of the Connecticut State Flag to your website: