We carry authentic Texas State Flags in both indoor and outdoor varieties. Our flags are proudly made in the United States from durable nylon and are printed with vibrant long-lasting inks. The Texas state flag is often displayed at schools, government organizations, banks, and other institutions in the state, as well as at the homes of people who take great pride in their Texas heritage.

Our indoor flags are finished with a pole hem and your choice of with or without golden fringe. Gold Fringe is the traditional way to display an indoor flag, however, some people choose without fringe for a simple and clean look that is also less expensive. If you are looking for a complete indoor presentation set, our Build Your Own Indoor State Flag Set program allows you to select a durable nylon indoor Texas Flag and choose between premium quality poles, bases, and ornaments, and tassel. For indoor applications, most buyers choose a 3ft. x 5ft. flag with an 8ft. pole, however, if you have a low ceiling, you may opt for a 7ft. pole, which is designed to work with drop ceilings. If you are looking for a very substantial state flag display, our 4ft. x 6ft. indoor flags can be paired with a 9ft. pole for our largest indoor display option.

Our outdoor state flags are finished with a canvas header and brass grommets and are offered in five sizes: 2ft. x 3ft., 3ft. x 5ft., 4ft. x 6ft., 5ft. x 8ft., and 6ft. x 10ft., to fit any sized flagpole. Typically, outdoor flags are flown outside of government organizations and institutions on in-ground and wall-mount flagpoles, however, some people also buy these flags to display their state pride at home. If you are looking for a wall-mount Texas flag set to display outside of your home, our Build Your Own Outdoor State Flag Set program will allow you to choose between premium quality 6ft. poles and brackets to display the Texas Flag on your front porch. 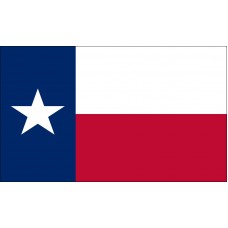 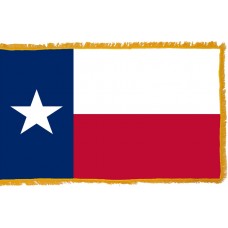 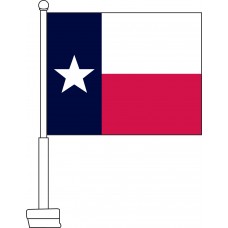 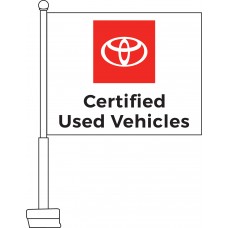 History of the Texas Flag

The Texas State Flag features a blue background on the left third of the flag. Inside of the blue field is a large white five-pointed star which is featured prominently in the center. The right two thirds of the flag are split horizontally into two bands, with the top being white and the bottom being red. The colors chosen for the Texas flag are the same colors used on the United States of America flag, which signifies the state's loyalty and allegiance to the country. In addition to that, the color blue represents loyalty, the color white represents purity, and the color red represents bravery. The single star on the flag represents Texas and the unity between God, State, and Country. The five points of the star represent the five characteristics that a good citizen should have which are, fortitude, loyalty, righteousness, prudence and broadmindedness. The Texas state flag is also known as the "Lone Star Flag" and was adopted on January 25th, 1839. Prior to serving as the Texas State Flag, this design served as the official flag of the Republic of Texas from 1836 until 1839. Prior to joining the United States, the Republic of Texas was an independent nation. During the time of its independence, the single star was symbolic of independence. The symbolic meaning of the design and colors were adapted once Texas joined the United States.

Texas is the second largest state in the United States and is located in the South-Central region of the country. It shares borders with New Mexico, Oklahoma, Arkansas, Louisiana, the Gulf of Mexico, and Mexico. The capital city is Austin and the largest city is Houston. The second largest city is San Antonio. The name, "Texas" is derived from the Caddo-Indian word, "Taysha," which translates as "friends." Texas is the only state that was an independent republic before it joined the United States of America. Texas is often referred to as "The Lone Star State," in reference to its flag. The area where Texas is located has been inhabited for approximately 16,700 years. Before the Europeans arrived in the area, it was occupied by Native American Tribes, including the Akokisa, Karankawa, Mogollan, and Caddo. In 1528, shipwrecked Spanish explorer Alvar Nunez Cabeza de Vaca became the first European to arrive to the area. Cabeza de Vaca mistakenly wrote about gold in the area, which inspired more Spanish to explore the area. Europeans did not begin to settle in Texas until 1685, when the French claimed the land following Robert de La Salle establishing Fort St. Louis. The French did not have control for very long as the Spanish settled Texas by establishing Catholic missions. The first Catholic mission that was established was in 1718 in San Antonio and became known as "The Alamo." In 1803, following the Louisiana Purchase, the American authorities insisted that the agreement had to include Texas and it came under the control of the United States of America. In 1821, after the Mexican War of Independence, the Texas territory became a part of Mexico and it was referred to as "Coahuila y Tejas." In 1825, with Mexico's approval, American Samuel Austin established a colony to which he brought approximately 300 families and Americans. Eventually, the Americans began rebelling against the Mexican authorities, resulting in the Texas Revolution in 1835. At the battle of Alamo in 1836, the Americans suffered a heavy defeat, which only encouraged them to rebel more, and on March 2nd, 1836, the Republic of Texas was formed. Despite being independent, Texas was still vulnerable to attack until General Sam Houston convinced the leaders to join the United States of America for protection and on December 29th , 1845, Texas officially became the 28th state.

We offer free images of the Texas Flag in four sizes (small, medium, large, and high resolution). These images are distributed royalty free for both personal and educational use and are ideal for use in projects and on websites. If you choose to use one of our images, attribution is appreciated, but not required.

The following html code snippets can be copied and pasted to add an image of the Texas State Flag to your website: