We carry authentic Missouri State Flags in both indoor and outdoor varieties. Our flags are proudly made in the United States from durable nylon and are printed with vibrant long-lasting inks. The Missouri state flag is often displayed at schools, government organizations, banks, and other institutions in the state, as well as at the homes of people who take great pride in their Missouri heritage.

Our indoor flags are finished with a pole hem and your choice of with or without golden fringe. Gold Fringe is the traditional way to display an indoor flag, however, some people choose without fringe for a simple and clean look that is also less expensive. If you are looking for a complete indoor presentation set, our Build Your Own Indoor State Flag Set program allows you to select a durable nylon indoor Missouri Flag and choose between premium quality poles, bases, and ornaments, and tassel. For indoor applications, most buyers choose a 3ft. x 5ft. flag with an 8ft. pole, however, if you have a low ceiling, you may opt for a 7ft. pole, which is designed to work with drop ceilings. If you are looking for a very substantial state flag display, our 4ft. x 6ft. indoor flags can be paired with a 9ft. pole for our largest indoor display option.

Our outdoor state flags are finished with a canvas header and brass grommets and are offered in five sizes: 2ft. x 3ft., 3ft. x 5ft., 4ft. x 6ft., 5ft. x 8ft., and 6ft. x 10ft., to fit any sized flagpole. Typically, outdoor flags are flown outside of government organizations and institutions on in-ground and wall-mount flagpoles, however, some people also buy these flags to display their state pride at home. If you are looking for a wall-mount Missouri flag set to display outside of your home, our Build Your Own Outdoor State Flag Set program will allow you to choose between premium quality 6ft. poles and brackets to display the Missouri Flag on your front porch. 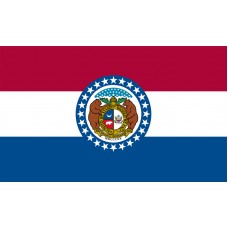 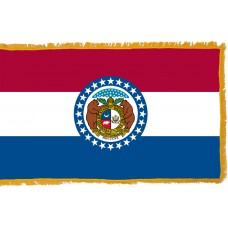 History of the Missouri Flag

The Missouri State Flag features a design of three horizontal equal-sized stripes of red, white, and blue, with the Missouri State Seal featured prominently in the center. The seal features two grizzly bears that are standing on their hind legs, one on either side of a smaller circular shield which they are supporting. The shield includes the US coat of arms on the right side. The left side of the circular shield is split into two sections, with the top section containing a blue background with a silver crescent moon and the bottom section containing a red background with a white silhouette of a grizzly bear. The crescent moon is symbolic of the small population and economic power of Missouri at the time of its inception; like the moon, the state would soon grow. The shield is surrounded by a golden belt which is emblazoned with black text reading, "United We stand, Divided We fall." This motto ties into the theme of the United States being a group of states that were unified as one stronger entity. Below the circular sheild, is a golden banner that supports the two bears. The banner features black text with the state motto, "Salus Populi Suprema Lex Esto," which translates to, "Let the welfare of the people be the supreme law." Underneath the banner are the roman numbers, "MDCCCXX," which signify 1820, the year the state began operating independently. Above the bears is a cloud formation containing 23 small stars and one large star, which is representative of Missouri as the 24th state to join the United States. The seal is circled by a blue ring that contains another 24 stars which again, represent Missouri as the 24th state of the United States of America. The blue color on the flag represents enduring vigilance and justic of the state, while the red represents valor and purity. The Missouri State Flag was designed by Mary Elizabeth Oliver, wife of former State Senator R.B. Oliver, and a member of the Daughters of the American Revolution and was adopted on 22nd March, 1913.

Missouri is located in the Midwestern region of the United States of America and shares borders with Tennessee, Iowa, Illinois, Kentucky, Arkansas, Oklahoma, Kansas, and Nebraska. The capital city is Jefferson City and the largest city is Kansas City. Missouri is often referred to as "The show-me-state." This name may pay homage a famous quote attributed to Missouri Congressman Willard Duncan Vandiver, where he mentioned that, "I am from Missouri. You have got to show me."

Indigenous people including the Native American tribes of the Osage, Missouri, and Illini resided in the area that is now Missouri for thousands of years, before the French explorers Jacques Marquette and Louis Jolliet became the first Europeans to reach the area in 1673. Shortly after the French discovered the area, French explorer Robert de La Salle traveled to the area and claimed the land for France In 1682 as part of Louisiana. The area of Missouri was slowly developed after the French discovered the area including the samll settlements of Fort Orleans, which was built in 1724 and the city of St. Louis which was established in in 1764.

We offer free images of the Missouri Flag in four sizes (small, medium, large, and high resolution). These images are distributed royalty free for both personal and educational use and are ideal for use in projects and on websites. If you choose to use one of our images, attribution is appreciated, but not required.

The following html code snippets can be copied and pasted to add an image of the Missouri State Flag to your website: