We carry authentic Arizona State Flags in both indoor and outdoor varieties. Our flags are proudly made in the United States from durable nylon and are printed with vibrant long-lasting inks. The Arizona state flag is often displayed at schools, government organizations, banks, and other institutions in the state, as well as at the homes of people who take great pride in their Arizona heritage.

Our indoor flags are finished with a pole hem and your choice of with or without golden fringe. Gold Fringe is the traditional way to display an indoor flag, however, some people choose without fringe for a simple and clean look that is also less expensive. If you are looking for a complete indoor presentation set, our Build Your Own Indoor State Flag Set program allows you to select a durable nylon indoor Arizona Flag and choose between premium quality poles, bases, and ornaments, and tassel. For indoor applications, most buyers choose a 3ft. x 5ft. flag with an 8ft. pole, however, if you have a low ceiling, you may opt for a 7ft. pole, which is designed to work with drop ceilings. If you are looking for a very substantial state flag display, our 4ft. x 6ft. indoor flags can be paired with a 9ft. pole for our largest indoor display option.

Our outdoor state flags are finished with a canvas header and brass grommets and are offered in five sizes: 2ft. x 3ft., 3ft. x 5ft., 4ft. x 6ft., 5ft. x 8ft., and 6ft. x 10ft., to fit any sized flagpole. Typically, outdoor flags are flown outside of government organizations and institutions on in-ground and wall-mount flagpoles, however, some people also buy these flags to display their state pride at home. If you are looking for a wall-mount Arizona flag set to display outside of your home, our Build Your Own Outdoor State Flag Set program will allow you to choose between premium quality 6ft. poles and brackets to display the Arizona Flag on your front porch. 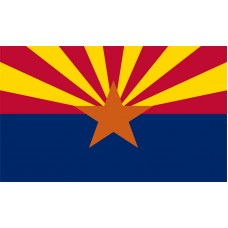 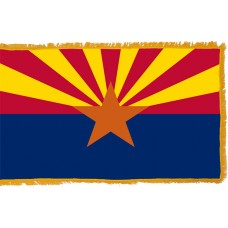 History of the Arizona Flag

The Arizona State Flag features a copper star in the center of the flag with the 13 alternating red and yellow rays being emitted from the star. The bottom half of the flag features a blue field. The thirteen rays of represent the 13 original colonies (Connecticut, Delaware, Georgia, Maryland, Massachusetts, New Hampshire, New Jersey, New York, North Carolina, Pennsylvania, Rhode Island, South Carolina, and Virginia). The colors red and yellow have several meanings; firstly the red signifies Arizona’s beautiful sunsets over the rocks, while the yellow represents the desert. Furthermore, the red and yellow colors pay homage to Arizona's Spanish heritage, as these are the colors featured on the Spanish Flag. The copper star represents Arizona's copper mining industry; while the blue field on the bottom half of the flag signifies the Colorado River. The Arizona State Flag was adopted on January 25th, 1917, however was designed earlier in 1911 when Charles Harris created the flag to represent his rifle team.

Arizona is located in the Southwestern region of the United States of and shares borders with New Mexico, Utah, Nevada, California, and Colorado. The capital city of Arizona is Phoenix which is the largest city in the state and the largest capital city in the United States of America. Arizona is referred to as the "Grand Canyon State" and the "Copper State." These nicknames pay homage to the fact that Arizona is home to the world-famous grand-canyon and is the biggest copper producing state in the country.

The original inhabitants of Arizona were Native American tribes which included Hohokam, Mogollan, and Ancestral Puebloan. The first European contact came in 1539 when explorer Marco De Niza and Spanish explorers ventured to Arizona seeking gold along with priests who were looking to establish missions. The first Spanish settlements were Tubac in 1752 and Tucson in 1775. Following the Mexican-American war, in 1848, the United States of America gained control of the Southwest which included Arizona, by purchasing the land for 15 million dollars as part of the Treaty of Guadalupe Hiddalgo. In 1853, through the "Gadsden Purchase," more land was added to Arizona. At the beginning of the Civil War, President Lincoln signed a bill making Arizona part of the Territory of New Mexico. Arizona eventually became the 48th official state on February 14th, 1912.

We offer free images of the Arizona Flag in four sizes (small, medium, large, and high resolution). These images are distributed royalty free for both personal and educational use and are ideal for use in projects and on websites. If you choose to use one of our images, attribution is appreciated, but not required.

The following html code snippets can be copy and pasted to add an image of the Arizona State Flag to your website: