We carry authentic Nevada State Flags in both indoor and outdoor varieties. Our flags are proudly made in the United States from durable nylon and are printed with vibrant long-lasting inks. The Nevada state flag is often displayed at schools, government organizations, banks, and other institutions in the state, as well as at the homes of people who take great pride in their Nevada heritage.

Our indoor flags are finished with a pole hem and your choice of with or without golden fringe. Gold Fringe is the traditional way to display an indoor flag, however, some people choose without fringe for a simple and clean look that is also less expensive. If you are looking for a complete indoor presentation set, our Build Your Own Indoor State Flag Set program allows you to select a durable nylon indoor Nevada Flag and choose between premium quality poles, bases, and ornaments, and tassel. For indoor applications, most buyers choose a 3ft. x 5ft. flag with an 8ft. pole, however, if you have a low ceiling, you may opt for a 7ft. pole, which is designed to work with drop ceilings. If you are looking for a very substantial state flag display, our 4ft. x 6ft. indoor flags can be paired with a 9ft. pole for our largest indoor display option.

Our outdoor state flags are finished with a canvas header and brass grommets and are offered in five sizes: 2ft. x 3ft., 3ft. x 5ft., 4ft. x 6ft., 5ft. x 8ft., and 6ft. x 10ft., to fit any sized flagpole. Typically, outdoor flags are flown outside of government organizations and institutions on in-ground and wall-mount flagpoles, however, some people also buy these flags to display their state pride at home. If you are looking for a wall-mount Nevada flag set to display outside of your home, our Build Your Own Outdoor State Flag Set program will allow you to choose between premium quality 6ft. poles and brackets to display the Nevada Flag on your front porch. 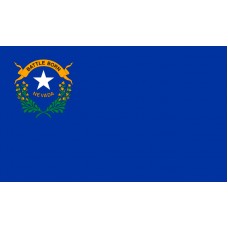 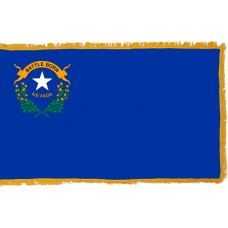 History of the Nevada Flag

The Nevada State Flag features a cobalt blue background. The top left corner of the flag features a silver five-point star that is encircled by two sagebrush branches in bloom with yellow flowers. The green sagebrush is the state flower of Nevada. A yellow banner is draped across the top with the words, "Battle Born," the state motto, emblazoned in black. Underneath the star, "Nevada" is written in bold yellow text. The silver star represents the states nickname, "the silver state," while "Battle Born" is one of the state's mottoes and represents Nevada becoming a state during the American civil war. The gold and silver colors used on the flag represent the state's natural resources of gold and silver. Nevada has utilized four different state flags since 1905.

In 1926, the Lieutenant Governor of Nevada, Maurice Sullivan determined that the state flag design at that time was cost-prohibitive to produce due to its intricate design. In accordance with this, a design contest was held for a new design in 1926. The winner of the contest was Louis Schellbach, III, who claimed the $25 prize and the honor of having been the designer of the Nevada State Flag. Schellbach's design was officially adopted as the Nevada State Flag on March 26th, 1929. The design was amended on June 8th, 1991, to add the state's name.

Nevada is located in the Southwestern region of the United States of America and borders California, Utah, Arizona, Oregon and Idaho. The capital city is Carson City, while the largest city in the state is Las Vegas. Carson City is the only state capital in the United States that borders another state. Nevada is the gambling and entertainment capital of the world and is also the largest gold producer in the United States. Nevada is named after the mountain range, Sierra Nevada. "Sierra" (translates as saw-the metal blade with teeth) and Nevada (translates as snow-covered). Nevada's approximately 300 mountain rages are the most of any state in the country. Nevada is nicknamed, "The Silver State" due to the vast amount of silver and gold that was found. The state is also known as "The Battle Born State" and "The sagebrush State."

The first residents of Nevada were Native American Tribes that included the Shoshone, Paiute, Washoe, and Mohave. The Spanish Explorer, Francisco Garces, was the first European to explore the area and he claimed the area as part of the Spanish Empire in the 1700s. In 1827, explorer Jedediah Smith mapped out the area for the travelers. Until the Mexican-American war, Nevada was considered to be part of Spain and Mexico. At the end of the war in 1848, the Treaty of Guadalupe Hidalgo made Nevada part of the United States of America . In 1861, Nevada became its own territory and it was officially named the 36th State of the United States of America on October 31st, 1864.

Nevada attracts many tourists each year, especially to visit the Las Vegas Strip which is known for being home to some of the largest and most luxurious casinos, resort, and hotels in the world. Lake Tahoe is also another popular destination, known for its beautiful beaches in the wummer and ski resorts in the winter.

We offer free images of the Nevada Flag in four sizes (small, medium, large, and high resolution). These images are distributed royalty free for both personal and educational use and are ideal for use in projects and on websites. If you choose to use one of our images, attribution is appreciated, but not required.

The following html code snippets can be copied and pasted to add an image of the Nevada State Flag to your website: