We carry authentic Oregon State Flags in both indoor and outdoor varieties. Our flags are proudly made in the United States from durable nylon and are printed with vibrant long-lasting inks. The Oregon state flag is often displayed at schools, government organizations, banks, and other institutions in the state, as well as at the homes of people who take great pride in their Oregon heritage.

Our indoor flags are finished with a pole hem and your choice of with or without golden fringe. Gold Fringe is the traditional way to display an indoor flag, however, some people choose without fringe for a simple and clean look that is also less expensive. If you are looking for a complete indoor presentation set, our Build Your Own Indoor State Flag Set program allows you to select a durable nylon indoor Oregon Flag and choose between premium quality poles, bases, and ornaments, and tassel. For indoor applications, most buyers choose a 3ft. x 5ft. flag with an 8ft. pole, however, if you have a low ceiling, you may opt for a 7ft. pole, which is designed to work with drop ceilings. If you are looking for a very substantial state flag display, our 4ft. x 6ft. indoor flags can be paired with a 9ft. pole for our largest indoor display option.

Our outdoor state flags are finished with a canvas header and brass grommets and are offered in five sizes: 2ft. x 3ft., 3ft. x 5ft., 4ft. x 6ft., 5ft. x 8ft., and 6ft. x 10ft., to fit any sized flagpole. Typically, outdoor flags are flown outside of government organizations and institutions on in-ground and wall-mount flagpoles, however, some people also buy these flags to display their state pride at home. If you are looking for a wall-mount Oregon flag set to display outside of your home, our Build Your Own Outdoor State Flag Set program will allow you to choose between premium quality 6ft. poles and brackets to display the Oregon Flag on your front porch. 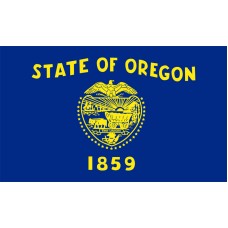 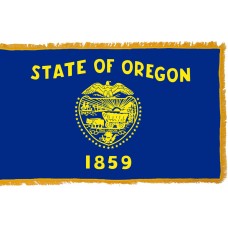 History of the Oregon Flag

The Oregon State Flag is unique in that it features a different design on the front and the back, both of which feature a gold imprint on a navy blue background. Blue and gold are the official colors of Oregon.

The front side of the flag features a shield with a scene which includes a horse drawn wagon walking across the land with several trees. In the background is a body of water with a boat, mountains, and the sun rising. At the bottom of the shield, the words, "The Union," are emblazoned. An eagle with his wings spread is perched on top of the shield. 39 five-point gold stars are arranged around the outside of the shield, representing Oregon's position as the 39th State of the Union. Above the shield, the words, "State of Oregon" are emblazoned and the year, "1859" is features below the shield. 1859 is the year Oregon became a state.

The reverse side of the flag features a golden beaver. The beaver is the state animal of Oregon.

The original Oregon State Flag was hand sewn by Marjorie Kennedy and Blanche Cox, employees at a Meier & Frank department store in Portland, Oregon in 1925. Meier & Frank were a very important part of Oregon's development, opening stores across the Pacific Northwest from 1857 onwards. There have been two attempts to change the flag's design, in 2009 and 2013. Both failed.

Oregon is the 9th largest of the United States of America. It is situated in the country's Pacific Northwest region, bounded partly by the Columbia River to the north, the Snake River to the east, and the Pacific Ocean to the west. Across Columbia is Washington state, and Idaho across the Snake River. Oregon borders California to the south, Nevada to its south east. Its largest city is Portland, and its capital city Salem. Although one of the largest states in the USA, Oregon's population is only the Union's 27th biggest. Most of its population live in the greater Portland area, which is noted for its unique way of life, embracing new technology with a very light-hearted attitude. In much of the west of the state, the logging industry dominates the economy.

The state of Oregon began as an autonomous region called Oregon Country in 1843. As the USA consolidated, it created Oregon Territory in 1848, and Oregon gained statehood 11 years later. Oregon has huge natural resources, the most important of which is its forests. The logging industry is central to Oregon's economy, as it has been since the state's foundation. These immense forests are only a part of Oregon's attractions for visitors. Oregon is home to a wide range of natural features including volcanoes, lakes, deserts and shrublands.

We offer free images of the Oregon Flag in four sizes (small, medium, large, and high resolution). These images are distributed royalty free for both personal and educational use and are ideal for use in projects and on websites. If you choose to use one of our images, attribution is appreciated, but not required.

The following html code snippets can be copied and pasted to add an image of the Oregon State Flag to your website: