We carry authentic North Dakota State Flags in both indoor and outdoor varieties. Our flags are proudly made in the United States from durable nylon and are printed with vibrant long-lasting inks. The North Dakota state flag is often displayed at schools, government organizations, banks, and other institutions in the state, as well as at the homes of people who take great pride in their North Dakota heritage.

Our indoor flags are finished with a pole hem and your choice of with or without golden fringe. Gold Fringe is the traditional way to display an indoor flag, however, some people choose without fringe for a simple and clean look that is also less expensive. If you are looking for a complete indoor presentation set, our Build Your Own Indoor State Flag Set program allows you to select a durable nylon indoor North Dakota Flag and choose between premium quality poles, bases, and ornaments, and tassel. For indoor applications, most buyers choose a 3ft. x 5ft. flag with an 8ft. pole, however, if you have a low ceiling, you may opt for a 7ft. pole, which is designed to work with drop ceilings. If you are looking for a very substantial state flag display, our 4ft. x 6ft. indoor flags can be paired with a 9ft. pole for our largest indoor display option.

Our outdoor state flags are finished with a canvas header and brass grommets and are offered in five sizes: 2ft. x 3ft., 3ft. x 5ft., 4ft. x 6ft., 5ft. x 8ft., and 6ft. x 10ft., to fit any sized flagpole. Typically, outdoor flags are flown outside of government organizations and institutions on in-ground and wall-mount flagpoles, however, some people also buy these flags to display their state pride at home. If you are looking for a wall-mount North Dakota flag set to display outside of your home, our Build Your Own Outdoor State Flag Set program will allow you to choose between premium quality 6ft. poles and brackets to display the North Dakota Flag on your front porch. 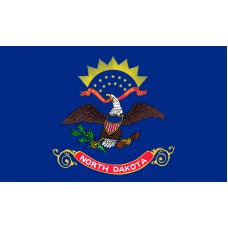 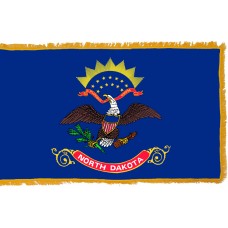 History of the North Dakota Flag

The North Dakota State Flag features an eagle with outspread wings that is carrying an olive branch in one claw and and a set of arrows in the other claw set upon a blue background. The eagle is holding a red ribbon in his beak, with gold text that reads, "E Pluribus, Unum." This phrase translates to, "Out of many, one," which is one of the mottoes of the United States. On the eagles breast is a shield which has a blue background on the top portion, with the bottom portion being comprised of 13 alternating red and white stripes. Above the eagle is a golden sunburst with 13 gold five-pointed stars. The thirteen stars and the thirteen alternating stripes on the breast shield, both represent the original thirteen colonies. The eagle is also a well-known symbol of the United States. Underneath the eagle is a red banner with white text that reads, "North Dakota." The North Dakota State Flag was officially adopted on June 12, 1889. The flag is essentially an exact replica of the flag that was flown by members of the state's soldiers during the Philippine–American War.

North Dakota is located in the Midwestern and Northern region of the United States of America and shares borders with Montana, South Dakota, Minnesota, and Canada. The capital city is Bismarck, which is also the second most populated city in the state (the largest city is Fargo.) North Dakota was named after "Dakota" who were the Sioux Indians that inhabited the area for centuries and Dakota translates as "friends." North Dakota is also referred to as "The Peace Garden State" due to the peace garden that sits on the border between Canada and North Dakota. The Peace Garden opened in 1932 to honor the peace between the two nations, and is thought to be the longest-lasting unguarded border in the world.

North Dakota has been inhabited for thousands of years and was occupied by Native American tribes that included the Mandan, Arikara, and Hidatsa. Even though the area had not been properly explored, France claimed the majority of the land after French explorer Robert De La Salle claimed the land West of the Mississippi in 1682. The first European to thoroughly explore the area was the French fur trader Pierre De La Verendrye in 1738. In 1803, following the Louisiana Purchase, the United States of America gained control of North Dakota. Thomas Jefferson sent explorers Lewis and Clark to the area where they built Fort Mandan on the Missouri River to survive the winter.

The first permanent settlement in North Dakota was at Pembina in 1812. In 1861, North Dakota became part of the Dakota territory. Not many people were choosing to move or settle there until 1862, when the Homestead Act was introduced. The Homestead Act was a law that entitled American citizens to claim 160 acres of land West of the Mississippi River and East of the Rocky Mountains, which they could keep if they lived on it for five years and improved it in some way. Following this law, many people chose to move to the area and eventually the Native American tribes were forced off their land which caused many battles. On November 2nd, 1889, North Dakota became a state of the United States of America. It is unclear whether it was the 39th state or the 40th state as South Dakota joined the Union on the same day and President Benjamin Harrison did not reveal which state he signed first.

We offer free images of the North Dakota Flag in four sizes (small, medium, large, and high resolution). These images are distributed royalty free for both personal and educational use and are ideal for use in projects and on websites. If you choose to use one of our images, attribution is appreciated, but not required.

The following html code snippets can be copied and pasted to add an image of the North Dakota State Flag to your website: